The organisms belonging to the phylum Nematoda are also known as “roundworms”. There are 28000 species of Nematoda identified till date. They are unsegmented vermiform animals. The epidermis has dorsal and ventral nerve cords. 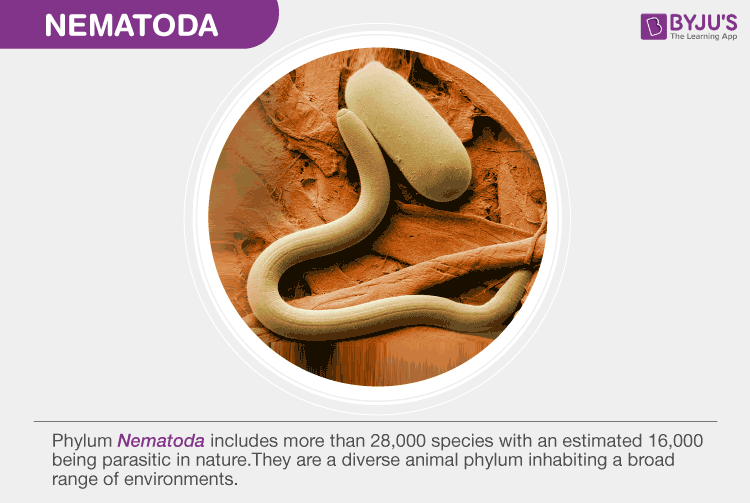 The Nematodes present in the soil feed on the bacteria, fungi, and other nematodes, and play an important role in nutrient recycling. They also attack the insects and control the pests. However, they cause severe damage to plants. They feed on the plant roots and reduce the nutrient uptake and stress tolerance of the plant.

A spadeful of soil contains numerous Nematodes. They cause diseases such as Ascariasis, Trichuriasis, Hookworm, Enterobiasis, Filariasis, and Angiostrongyliasis in humans.

They are characterized and categorized in the following ways.

Following are the important characteristics of Nematoda:

Nematodes are classified into the following classes:

The class Phasmidia is divided into the following orders:

The class Aphasmidia or adenophorea is divided into the following orders:

For more information on phylum Nematoda, characteristics of Nematoda, and the classification of Nematodes, keep visiting BYJU’S website or download BYJU’S app.

Test your Knowledge on Nematoda!
Q5