OCD presents itself in many appearances, and people are often surprised to learn that it goes far beyond the common perception of excessive. Hand washing or repetitive checking of light switches are examples of this disorder.

Obsessions are thoughts, images, or urges. They can feel repetitive, distress and intrusion. Every person has bothersome, thoughts or worries. When a person is preoccupied with these thoughts and is unable to control, they usually get rid of them, or ignore them as they might be obsessions.

Obsessions are regularly, impractical and do not make any sense. It often does not suit one’s personality. Obsessions cause depression and are usually in the form of anxiety. People with obsessive thoughts will often try to reduce this distress by acting out certain behaviours, known as rituals or compulsions.

The cause of this disorder is not yet fully understood. According to the medical professionals, this disorder has the tendency to run in families, therefore they believe in the contribution of the genetic component to this disease.

Compulsions are an action or behaviour of a person, who does to relieve the distress they feel because of the obsessions. It could be observable or hidden. Whereas, most people have preferred ways of doing certain things.

For example: A daily morning routine or a certain way to arrange items on a desk.

People with this disorder feel to perform their compulsions and find it almost impossible to stop. Usually, people with OCD identify the compulsion being senseless. However, he or she feels helpless to stop doing it and may need to repeat the compulsion over and over again. Sometimes this is described as a ritual. Common compulsions include excessive washing and checking, and mental rituals such as counting, repeating certain words, or praying. Therefore, compulsions often help in relieving distress in the short-term, rather than the long- term.

As a person with OCD gets used to doing them, reducing his or her anxiety. To make them more effective again, the person may perform them more frequently and for longer periods of time. This is why people suffering from OCD appear to be “stuck” doing the same thing over and over again.

Signs and Symptoms of OCD

Person with the obsessive compulsive disorder present with a wide variety of symptom including, persistent, unwanted thoughts, impulses or images (obsessions). They perform irritating, often seemingly purposeful, ritualized behaviours (compulsions) in order to neutralize or to reduce the thought.

Repetitive and unpleasant, with at least one obsession or compulsion recognized as excessive or unreasonable. The persisting symptoms last for at least 50 to 60 minutes a day or considerably interfering with normal functioning.

The common obsessive thoughts and compulsive behaviors include: 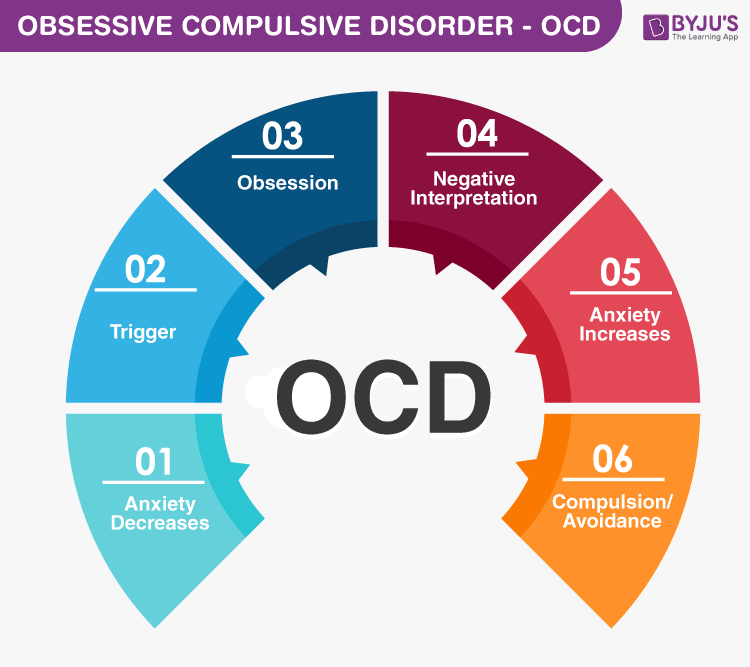 There are several disorders that seem to be related to OCD. They share similar features such as intrusive thoughts and/or repetitive behaviours. Although similar, there are important differences to consider when looking at effective treatments.

Currently, there is no cure for this disorder. However, with effective treatment, people can learn to manage their symptoms and restore normal functioning.

Best practice guidelines for OCD recommend is cognitive-behavioural therapy (CBT) and antidepressant medications. Whereas many people will benefit from using one or the other, those with moderate-to-severe forms of OCD often do best when both treatments are combined.

Medications in the Treatment of OCD

Selective Serotonin Reuptake Inhibitors: SSRIs this is a large class of antidepressants that work very specifically on the serotonin neurotransmitter system. These include the following:

Test your Knowledge on OCD!
Q5