Diseases - Types of Diseases and their Symptoms

Over the years, science and technology have improved to such an extent that we have been able to identify the causes, symptoms and cures for various diseases with a high degree of success. And this is supported by considerably long average lifespan and lower mortality rates. But what exactly is a disease? 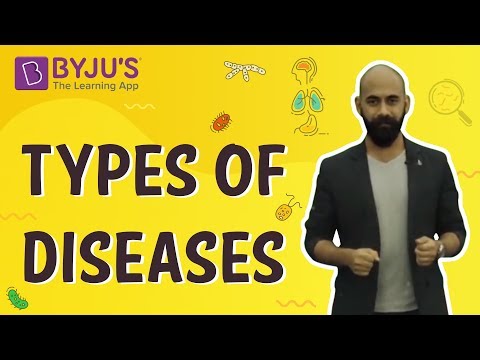 “A disease is a condition that deteriorates the normal functioning of the cells, tissues, and organs.”

Diseases are often thought of as medical conditions that are characterized by their signs and symptoms.

The disease can also be defined as:

“Any dangerous divergence from a functional or normal state of an entity.”

When a person is inflicted with a disease, he exhibits a few symptoms and signs that range from normal to severe depending upon the medical condition. Hence, in order to identify different diseases, the normalcy of an entity needs to be studied and understood as a clear demarcation between disease and disease-free is not always apparent.

The diseases are usually caused by many factors rather than a single cause. When we have a disease, we eventually show some signs, such as headaches, cough, cold, weakness. These signs are referred to as “symptoms.” In almost all diseases, symptoms are shown immediately after having been struck by the disease. However, it varies depending upon the seriousness of the disease.

Today, there are various ways to classify diseases.

Diseases can be of two types

Diseases that spread from one person to another are called communicable diseases. They are usually caused by microorganisms called pathogens (fungi, rickettsia, bacteria, viruses, protozoans, worms). When an infected person discharges bodily fluids, pathogens may exit the host and infected a new person (sneezing, coughing etc). Examples include Cholera, chickenpox, malaria etc.

These diseases are caused by pathogens, but other factors such as age, nutritional deficiency, gender of an individual, and lifestyle also influence the disease. Examples include hypertension, diabetes, and cancer. They do not spread to others and they restrain within a person who has contracted them. Alzheimers, asthma, cataract and heart diseases are other non-infectious diseases.

They are mainly caused by the malfunctioning of vital organs in the body due to the deterioration of cells over time. Diseases such as osteoporosis show characteristics of degenerative diseases in the form of increased bone weakness. This increases the risk of bone fractures.

When degeneration happens to the cells of the central nervous system, such as neurons, the condition is termed as a neurodegenerative disorder. Alzheimer’s is a prominent example of this disorder. Degenerative diseases are usually caused by ageing and bodywear. Others are caused by lifestyle choices and some are hereditary.

An allergic reaction arises when the body becomes hypersensitive to certain foreign substances called allergens. This usually happens when the immune system reacts abnormally to any seemingly harmless substances. Common allergens include dust, pollen, animal dander, mites, feathers, latex and also certain food products like nuts and gluten. Peanuts and other nuts have the capability to cause severe allergic reactions that may induce life-threatening conditions such as difficulty in breathing, tissues swelling up and blocking the airways and anaphylaxis shock.

Asthma is a chronic disease, mainly affects the bronchi and bronchioles of the lungs. One of the factors responsible for this is airborne allergens such as pollens or dust. Symptoms include difficulty in breathing, wheezing, and cough.

They occur due to the deficiencies of hormones, minerals, nutrients, and vitamins. For example, diabetes occurs due to an inability to produce or utilize insulin, goitre is mainly caused by iodine deficiency, kwashiorkor is caused by a lack of proteins in the diet. Vitamin B1 deficiency causes beriberi.

It is an abnormal enlargement of the thyroid gland by blocking the oesophagus or other organs of the chest and neck. This causes difficulty in breathing and eating.

Blood contains the plasma, white blood cells, platelets and red blood cells. When any of these components are affected, it can lead to blood disorders. For instance, the red blood cells are destroyed when a person contracts the sickle cell disease. The red blood cells are distorted into the shape of a sickle (hence, the name) and it loses its ability to carry oxygen. Consequently, this disease is characterized by symptoms similar to chronic anaemia, such as shortness of breath and tiredness.

We have seen the classification of different entities based on various characteristics, for simplification, we classify organisms to group them together and study about them as a class. Similarly, diseases are caused by different microorganisms and can be classified as diseases caused by bacteria, fungi, viruses etc. Some diseases are also caused by multicellular organisms such as worms.

Listed below are few diseases and the disease-causing agents

Test your Knowledge on Diseases!
Q5