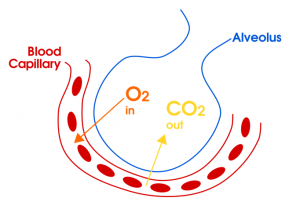 Transport of Oxygen during Respiration

During respiration, about 97% of oxygen is transported by Red Blood Cells in the blood and the remaining 3% gets dissolved in the plasma. Haemoglobin is a pigment present in the RBCs that gives blood its red colour. Oxygen binds with haemoglobin to form oxyhaemoglobin, which depends on the partial pressures of oxygen, carbon dioxide, H+ concentration and the temperature. One haemoglobin molecule can carry up to 4 molecules of oxygen. The partial pressure of oxygen, H+ concentration and low temperature are the ideal conditions for the formation of oxyhaemoglobin. These conditions are met in the alveoli. But in the tissues, opposite conditions exist and so oxygen is dissociated from the oxyhaemoglobin. Every 100mL of blood that gets oxygenated in the lung surface can deliver 5 mL of oxygen to the tissues on an average.

Transport of Carbon Dioxide during Respiration To know more about the gas exchange and Human respiratory system, visit BYJU’S.