“Soil profile is defined as the vertical section of the soil from the ground surface downwards to where the soil meets the underlying rock.”

What is Soil Profile?

The soil is the topmost layer of the earth’s crust mainly composed of organic minerals and rock particles that support life. A soil profile is a vertical cross-section of the soil, made of layers running parallel to the surface. These layers are known as soil horizons. 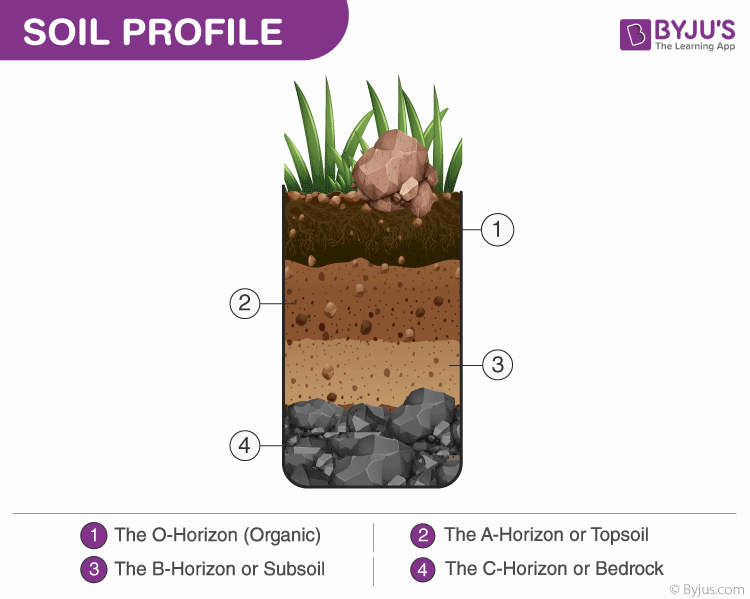 Each layer of soil has distinct characteristics.

Soil profile helps in determining the role of the soil as well. It helps one to differentiate the given sample of soil from other soil samples based on factors like its colour, texture, structure, and thickness, as well as its chemical composition.

Also refer: Minerals In The Soil And Soil Pollution

Read on to explore what is soil profile and the different layers of soil that make up the soil profile.

The soil profile is composed of a series of horizons or layers of soil stacked one on top of the other. These layers or horizons are represented by letters O, A, E, C, B and R.

The O horizon is the upper layer of the topsoil which is mainly composed of organic materials such as dried leaves, grasses, dead leaves, small rocks, twigs, surface organisms, fallen trees, and other decomposed organic matter. This horizon of soil is often black brown or dark brown in colour and this is mainly because of the presence of organic content.

This layer is rich in organic material and is known as the humus layer. This layer consists of both organic matter and other decomposed materials. The topsoil is soft and porous to hold enough air and water.

In this layer, the seed germination takes place and new roots are produced which grows into a new plant. This layer consists of microorganisms such as earthworms, fungi, bacteria, etc.

This layer is composed of nutrients leached from the O and A horizons. This layer is more common in forested areas and has lower clay content.

It is the subsurface horizon, present just below the topsoil and above the bedrock. It is comparatively harder and more compact than topsoil. It contains less humus, soluble minerals, and organic matter. It is a site of deposition of certain minerals and metal salts such as iron oxide.

This layer holds more water than the topsoil and is lighter brown due to the presence of clay soil. The soil of horizon-A and horizon-B is often mixed while ploughing the fields.

The C-Horizon or Saprolite

This layer is devoid of any organic matter and is made up of broken bedrock. This layer is also known as saprolite. The geological material present in this zone is cemented.

It is a compacted and cemented layer. Different types of rocks such as granite, basalt and limestone are found here.

Explore more about: Preparation of Soil for Agriculture

Apart from the rocks, minerals, and layers, soil profile also consists of a water content, which is referred to as soil moisture.

What Is Soil Moisture?

Water in the soil is referred to as soil moisture. Water absorption in the soil is determined by various factors. It plays a major role in soil formation. As a result of precipitation, water arrives at the surface. The particle size distribution of soil determines its porous nature and causes downward movement of water vertically which is known as infiltration. This penetration continues deep in the layers of soil until it reaches saturation.

Water, on reaching this barrier, cannot seep vertically further, hence it moves sideways. Formation of puddles as a result of saturation is called surface ponding which can be long-lasting. Water that is available to plants is called Root zone moisture while surface soil moisture is the water available in the immediate upper region of soil.

Moisture content in the soil can be measured using a device known as Tensiometer. They are water-filled tubes which are sealed with a porous ceramic tip towards the bottom and a gauge at the top which is devoid of air molecules. They are penetrated into the soil till the root level. Water passes between the tip of the device and the ambient soil until it reaches an equilibrium and hence, tension is recorded on the gauge. Readings thus obtained give a measure of soil moisture in that region.

Also Refer: What Is Soil?

The different types of water present in the soil include:

The water that reaches the water table of the soil due to the gravitational force is referred to as gravitational water. This is not available to the plants.

This water is also not available to the plants. It is a thin film of water tightly held by the soil particles.

The chemical compounds present in the soil particles contain water. This is known as chemically combined water. This is also not available to the plants.

This water is available to the plants for absorption. This water exists between soil particles in small capillaries.

The hanging roots of the epiphytes absorb the moisture in the air due to the presence of hygroscopic hairs and spongy velamen tissues. 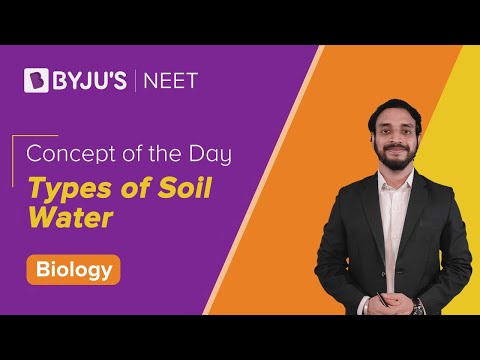 The soil moisture can be measured by various tools mentioned below:

These tools measure the tension of soil moisture. They are water-filled tubes, with a porous ceramic tip at the bottom. These are sealed and have a vacuum gauge at the top. They are inserted in the soil to the depth of the plant root zone. The readings obtained in the tensiometers indicate the availability of water in the soil.

These consist of two electrodes connected to lead wires extending to the soil surface. The electrodes are embedded in the blocks of porous material. It is used to measure soil water tension.

To know more about soil profile, layers of soil, soil moisture or any other related topics, visit us at BYJU’S Biology.

Soil is one of the most important naturally occurring resources. It is the natural habitat of plants and many microorganisms. It nourishes plants with water and essential nutrients hence enabling their growth. Soil is the most important raw material for agriculture. Agriculture provides food, clothing and shelter to all entities either directly or indirectly. Hence, soil is an inseparable part of our living.

Soil is mainly formed by the breakdown of bigger rocks into smaller and fine particles with the continuous action of wind, rain and other agents of natural force. It takes hundreds to thousands of years for the formation of soil.

Air, water, minerals and other organic matter are the basic components of soil.

The soil profile plays an important role in maintaining the fertility of the soil and the nutrition content in the soil.

The soil profiles are composed of a series of horizons or layers of soil, which are stacked one above the other. The 4 horizons of soil are:

The topsoil is the topmost layer of the soil. It is dark brown coloured soil which mainly consists of organic matter, decomposed material and many living organisms including some microbes, earthworms and other worms.

The different types of water present in the soil include: