Typhoid is an infectious bacterial disease that mainly spreads through contaminated food or water. It can also spread due to

poor hygienic conditions. The major symptoms of this disease are characterized by high fever, loss of appetite and diarrhoea. Salmonella typhi is the bacterium responsible for this disease and humans are the only carriers. The first case of typhoid fever was reported in the United States in the early 1900’s. Overall, about 21 million people are infected with this disease annually, and about 200,000 cases are fatal. Furthermore, scientists have identified 2 types of typhoid causing bacterium, namely:

Also called as “Salmonella enterica serotype Typhi”, this microbe is the causative agent for this disease. It is a gram-negative bacteria characterized by a thin cell wall and an outer membrane. The cells are reddish in colour, with some having black stains in the centre.

It is rod-shaped and grows in the small intestine of the human body. Human beings are the main hosts of these bacteria. This type of species can survive in environments which are rich in oxygen and also, they are found in sewage, water bodies and some eventually make their own on to food.

The bacteria enter the human body through the contaminated foods and water, where it then enters into the intestinal cells of the human body. Later, it passes through the bloodstream and destroys the lymphatic system and spreads throughout the body. This bacterium is mainly carried by the white blood cells present in the liver and also the bone marrow. There, they multiply and re-enter the blood cells, which in turn, causes a number of symptoms to appear in the later stages. 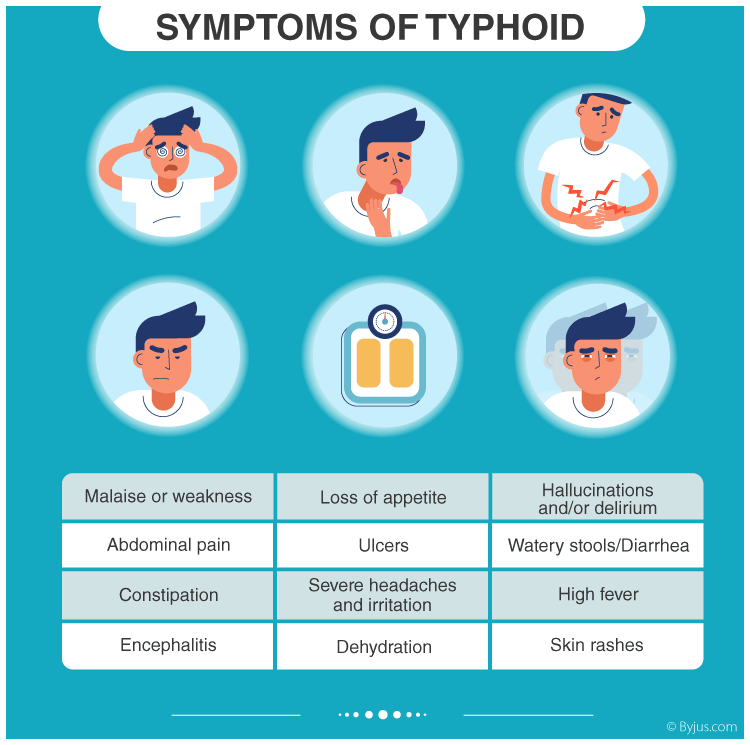 Sanitation is one of the most important things that one can do to prevent the infection of such diseases. The other way would be the use of antibiotics that can kill the disease-causing germs. Also by maintaining good and hygienic food habits, one can get rid of diseases easily.

To learn more about Typhoid or other related topics, visit BYJU’s.