Continuity And Differentiability For Class 12

The topics and subtopics covered in continuity and differentiability class 12 are:

(ii) A real function (f) is said to be continuous if it is continuous at every point in the domain of f.

Consider a function f(x), and the function is said to be continuous at every point in [a, b] including the endpoints a and b.

Continuity of “f” at a means,

Continuity of “f” at b means,

Assume that if f is a real function and c is a point in its domain. The derivative of f at c is defined by 0

The derivative of a function f at c is defined by-

If the two real functions, say f and g, are continuous at a real number c, then

Theorem 3: If a function f is differentiable at a point c, then it is also continuous at that point. 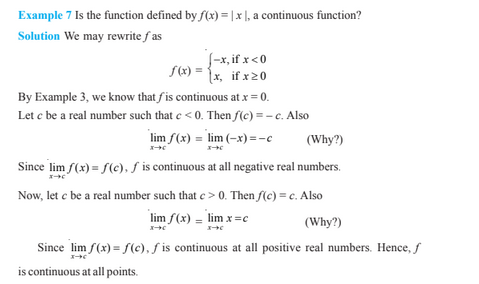 For more topics on class 12 concepts, register with BYJU’S – The Learning App for more examples and personalized videos to learn with ease.