The meaning of denominator is the divisor of a fraction or the number which is below the line in a fraction. It is just the opposite of numerator, which lies above the line in a fraction. Now you may consider, what a fraction is? A Fraction is one part when a whole is divided into equal parts. Mathematically its is shown by the division of two numbers. Let’s go through some examples and you recall all the divisibility rules to make sure you understand the formulas easily.

For example, 1/4 is one part out of the four equal parts created from that one whole thing. So here, 1 is the numerator and 4 is the denominator. 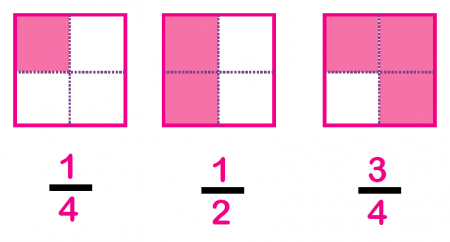 When an integer is expressed as a fraction, then there appear two numbers separated by a horizontal line. The denominator is the number which appears at the bottom of the horizontal line, whereas the number above the line is the numerator. It is not necessary that only numerical values are expressed in numerator and denominator form, instead, the variables are also expressed in the same form such as x/y, p/q, m/n, etc., where y, q and n are the denominators respectively.

Some of the examples of the denominator are;

The denominator indicates the number of equal parts in which the whole thing has to be divided.

The numerator indicates the number of divisions selected out of the total number of equal parts.

This would be better explained with the help of an Example.

3/4 is a fraction in which the denominator 4 represents that 4 equal divisions have to be made.

3 parts selected out of 4 equal parts created out from 1 circle can be represented as 3/4.

Diagrammatic representation of ¾ is as follows:

The diagram clearly shows three equal parts taken out when the whole circle is divided into four equal parts.

What is Common Denominator?

The least common denominator of two or more non-zero denominators is the smallest whole number that is divisible by each of the denominators.

How to Find the Least Common Denominator?

There are two fractions as follows:-

Multiply both the fractions with the product (15) with the top as well as the bottom:

Thus, we have a common denominator in both our fractions.

We have two fractions: ⅓ and ⅙

The smallest common multiple that can be seen is 6.

So that is the LCD.

The denominator of a fraction needs to be rationalized when it is an irrational number so that further calculations can be made easily on the fraction.

To remove the radical multiply the numerator and denominator by the \(\sqrt{3}\), we have

By multiplying the top and bottom with the denominator value, we have created the smallest possible perfect square in the denominator and removed the radical as per our requirement.

When there are two terms in the denominator that make it irrational.

In this case, multiply the numerator and denominator with the conjugate of the denominator.

The conjugate means the same denominator but with the opposite sign.

This was all about denominator and how to rationalize the fraction. Learn more about ratio and proportion, percentage, fractions etc. by visiting our site BYJU’S.