In mathematics, numerator and denominator play an essential role while dealing with fractions. As we know, that fraction represents a numerical value, which defines the parts of a whole. Suppose a number has to be divided into four parts, then it is described as p/5. So the fraction here, p/5, defines 1/5th of number p. If the line part of the fraction is at a slant, then the numerator will be on the left. 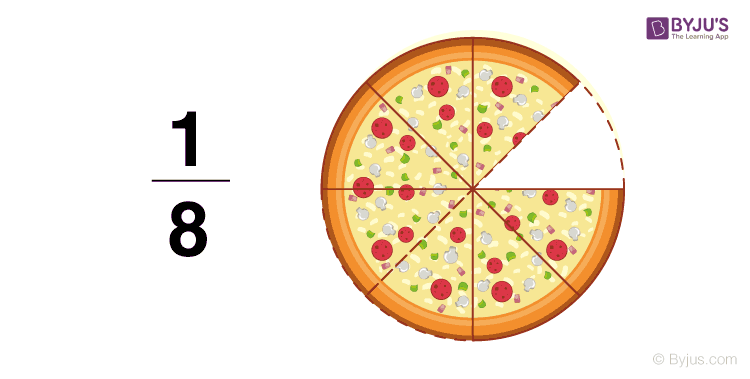 Numerator of a Fraction

Numerator of fraction represents the number of parts selected or removed from the total. For example, if a circle is cut into eight parts and four parts as shown in the below figure, then the selected parts of the circle, i.e. 3 over a part of the total number of parts can be written as 3/8 and 3/4, respectively. Here, 9 is greater than 5, that means the denominator is less than the numerator.

Geetha took 3 roses from a basket of 10 roses. Represent this in the form of a fraction and identify the denominator.

Number of roses taken by Geetha = 3

Thus, Geetha took 3/10th of the roses from the basket.

Arun bought 20 mangoes. He gave 4 mangoes to his brother. What fraction of the mangoes was he left with? Also, find the numerator of the obtained fraction.

Number of mangoes given to his brother = 4

Thus, Arun was left with four-fifth of the mangoes.

What is a numerator and a denominator?

What is the numerator in Division?

How do you remember the numerator and denominator?

Is the numerator bigger than the denominator?

Yes, in some fractions the numerator will be bigger than the denominator, such fractions are called improper fractions. However, not in all the fractions, numerators are greater than denominators.

Do you divide the numerator by denominator?

To divide the numerator by denominator, we need to express these parts as a multiplication of their factors. When we represent them in terms of factors, we can cancel out the common factors to get the reduced form.