Pareto chart is also called a Pareto diagram and Pareto analysis. It is named for the Italian economist Vilfredo Pareto, who described Pareto principle, according to which roughly 80% of the outcomes come from 20% of the conditions, for many events. This assumption is used in calculations of business profit or population of any country. Hence, it is a part of probability and statistics.

What is Pareto Chart?

A Pareto chart is a bar graph or the combination of bar and line graphs. The purpose of using this chart is to represent a set of data in a bar graph chart. The individual values are represented by the length of the bars and the line shows the combined total. The values are expressed from the longest bar to the shortest bar in the graph. These charts are also created using the excel sheets. Basically these graphs give statistical information on a bulk of information for each category. Hence, it is a part of Mathematical statistics.

Let us learn how to make use of the Pareto chart for various applications.

Pareto charts are the best chart to do the analysis of the bulk of data. In business industries, these charts are used very often. Let us see some of its more applications.

Let us take an example, where we need to prepare a chart of feedback analysis for XYZ restaurant, as per the reviews and ratings received from the customers. Here the customers are given a checklist of four points based on which they have to rate the restaurant out of 10. The four points are:

Now, let us draw the Pareto chart for the Feedback of XYZ restaurant as per the data received. 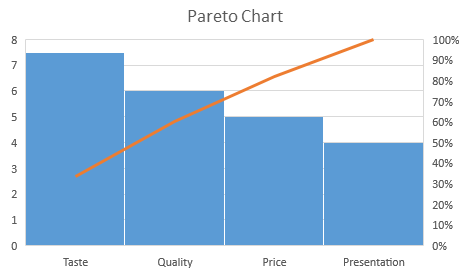 Download BYJU’S-The Learning App and get personalised videos for many mathematical concepts to learn easily and quickly.

What is a Pareto chart used for?

A Pareto chart is a fundamental quality tool that assists us in identifying the most prevalent defects, complaints, or any other factor we can count and characterise or classify.

How do you make a Pareto chart?

In excel one can make a Pareto chart easily in two steps. First, select the data (generally a column containing text of categories and another with numbers. A Pareto chart then groups the same categories and sums the corresponding numbers. Then, select Insert statistic chart > histogram > choose Pareto. This will give you the Pareto chart for the given data.

The 80/20 rule of Pareto charts states that 80% of the results are determined by 20% of the causes. Thus, it is suggested that to identify the 20% defect types that are the reason for 80% of the defects.

How do you create a Pareto chart in statistics?

How does Pareto chart work?

The primary objective of the Pareto chart is to highlight the most important among a typically large set of factors. In quality control, it often depicts the most frequent causes of defects, the highest occurring type of defect, or the most frequent reasons for customer complaints, and so on.
Test your knowledge on Pareto chart
Q5