Organisms consume food for survival, growth and repair. Most of the food is digested and utilised by the body for the production of energy; the rest is expelled from the body by the digestive system in the form of faeces. This process is NOT called excretion, though; it is called egestion (also known as defecation).

On the contrary, excretion is the process where metabolic wastes are eliminated from an organism. In humans, this function is performed through the kidneys, lungs and skin. In animals, the main excretory products are: 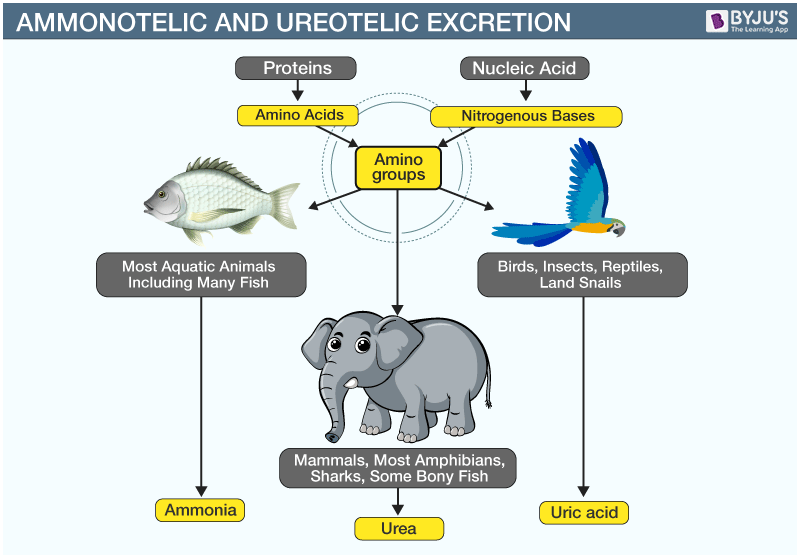 There are a few significant modes of excretion observed in living organisms.

Based on the excretory product, five modes of excretion are known in animals. They are:

The process of eliminating ammonia from the body is known as ammonotelism, and the organisms which exhibit this nature are called ammonotelic. Most fish, protozoans, echinoderms, poriferans and crustaceans fall into this category. Aquatic animals excrete ammonia directly into the environment; where the compound is quickly diluted. It is also very toxic to tissues.

In some mammals and amphibians, urea is excreted as a metabolic waste product. Such organisms are called ureotelic. In these organisms, ammonia that is produced is converted to urea in the liver of animals and is released back into the blood. The kidneys filter the urea and expel the urea outside the body. Some of the urea is retained in the matrix of the kidney to maintain a desired osmolarity in the organisms. Humans are ureotelic as we expel the urea through urine. Moreover, urea is comparatively less toxic than ammonia.

Uricotelic animals remove nitrogenous wastes as uric acid in the form of pellets or paste. Metabolically, this process is quite costly; however, the water loss is minimal, and it is the least toxic. Moreover, since uric acid is not readily soluble in water, the excrements form pasty white suspensions. Most reptiles, birds, and insects are classified as uricotelics.

Spiders convert the ammonia into guanine before excretion. This characteristic is also found in some reptiles, birds and earthworms. It is also insoluble in water; hence no water is required for its excretion.

Register at BYJU’S to explore more about the modes of excretion.

1. What are the different modes of excretion in humans?

Excretion in humans is carried out through kidneys, lungs and skin.

2. Are lungs part of the excretory system?

Lungs do excrete metabolic waste products such as carbon dioxide and water.

3. What are nitrogenous wastes?

Nitrogenous wastes are formed as a result of metabolic cellular activities. The most common metabolic wastes are ammonia, urea, and uric acid.

4. Do proteins get stored in the body?

Proteins can’t be stored in the body. When protein is metabolized, nitrogenous wastes such as ammonia and urea are formed. These are then expelled from the body.