Since the beginning of the 21st century, mankind has witnessed the rise of terrorism, economic inflation, and climate change as the major threats to a healthy and peaceful life. But very few are aware of an even bigger problem of ‘hidden hunger’ lurking in the background. About half of the world’s population faces the deficiency of micronutrients, proteins, and vitamins and other essential elements in their diet.

According to the statistics of the World Health Organization (WHO), a staggering 2 billion people worldwide are suffering from anaemia and is mainly due to the deficiency of iron in their diet. This kind of deficiency has multiple detrimental effects on the population like increased risks of diseases, reduced lifespan, reduced mental abilities, etc.

Biofortification of staple food crops has emerged as a very potent solution to tackle this problem of deficiency of nutrients in developing countries where a large section of the population cannot afford enough fruits, vegetables, legumes, fish, and other food products to meet their essential nutritional requirements.

Biofortification is the process of developing micronutrients – rich food crops using the best conventional breeding practices or via genetic modification using modern biotechnology. It differs from ordinary fortification and it focuses on improving the nutrient profile of the food crop as it grows and matures instead of manually adding nutrients to the food while it is being processed.

Biofortification is a realistic and cost-effective source of conveying micronutrients to those populations who have limited access to different diets and other micronutrient interventions. 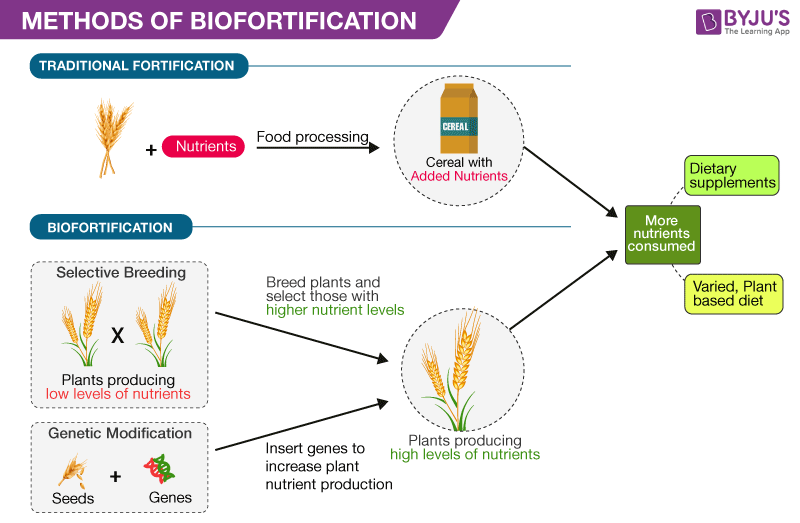 Some of the prominent biofortification projects around the world include Stay tuned with BYJU’S to learn more about biofortification.