Malaria is a mosquito-borne infectious disease caused by various species of the parasitic protozoan microorganisms called Plasmodium. Malaria is a disease that man has battled with for a long time. The first evidence of this protozoan came from mosquitoes preserved in amber nearly 30 million years ago.

It is even thought to have brought the Roman Empire to its knees. Malaria was so prevalent during the Roman times that the disease is also called ‘Roman Fever’. Today, the credit for actually discovering the parasite is given to Charles Louis Alphonse Laveran, a French physician. He even won the Nobel Prize in 1907 for his findings.

Here, let’s learn more about malaria and the life cycle of malarial parasite with the help of a diagram. 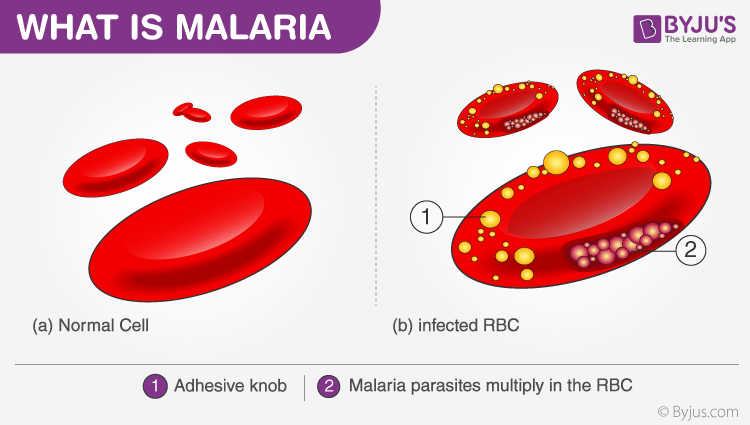 There are many factors that can cause malaria, such as –

Symptoms of malaria are exhibited within 7 to 18 days of being infected. Common symptoms include:

Sir Ronald Ross and his study on the transmission of the disease helped carve the way for future scientists to effectively combat the disease. His deep research showed that specifically, the female Anopheles stephensi mosquito is the vector of the disease, and addressing this problem will prevent malaria and in turn, save countless lives.

Below is a labelled diagram of the malarial parasite to give you a better insight of their life cycle. 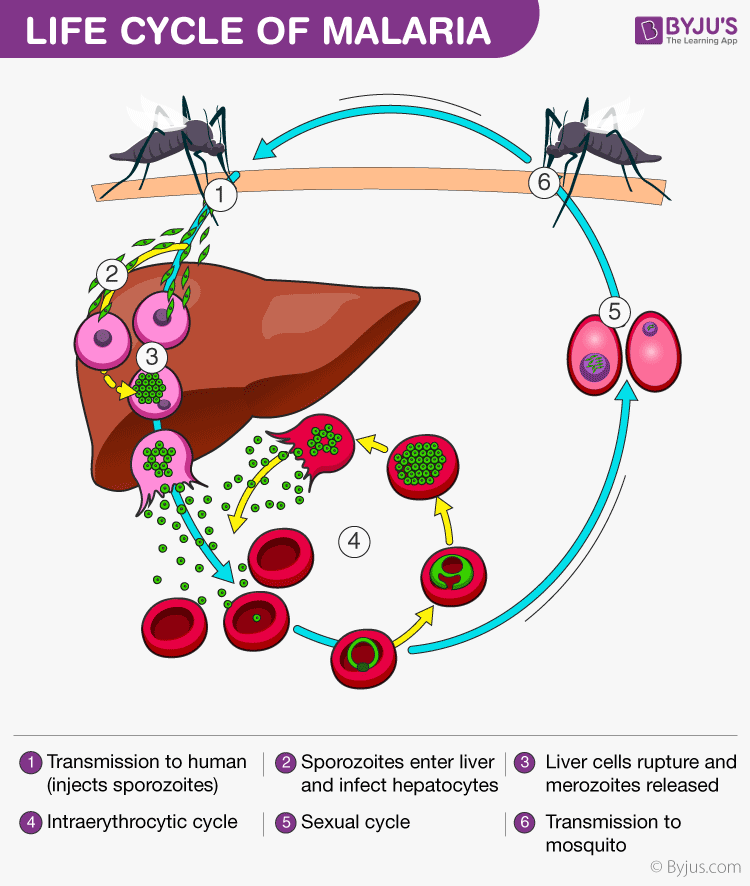 Malaria parasite exists in the form of a motile sporozoite. The vector of malaria i.e. the female Anopheles mosquito transmits the malarial sporozoites into the hosts. When an infected mosquito bites a human, the sporozoites are injected into the blood through the mosquito’s saliva.

The sporozoites travel into our body and accumulate in the liver. These parasites initially multiply within the liver, by damaging the liver and rupturing the blood cells in the body. Malaria kills by causing the destruction of the red blood cells in the host. The parasites reproduce asexually in the RBCs, bursting the cells and releasing more parasites to infect more cells. The rupture of red blood cells by the malaria parasite releases a toxin called hemozoin which causes the patient to experience a condition known as the chills.

When the female Anopheles mosquito bites an infected human, the parasites enter the mosquito’s body along the human blood it is drinking. It is inside the mosquito’s body that the actual development and maturing of the parasite happens. The parasites produced in the human body reach the intestine of the mosquito where the male and females cells fertilize each other to lead to the formation of a sporozoite. On maturing, the sporozoite breaks out the mosquito’s intestine and migrate to the salivary glands. Once they reach salivary glands, they wait till the mosquito bites another human and the process of infection and disease begins all over again. It is prudent however to observe that the complete development of the malaria parasite takes place in two different hosts; humans and mosquitoes.

Malaria is one of the major causes of preventable death in the world today. It affects more than 500 million people worldwide and causes 1 to 2 million deaths every year. It is a tropical infectious disease and almost 90 per cent of the cases are from Sub-Saharan Africa.

There are two ways to deal with malaria – prevent the mosquito bite from happening (i.e. preventative steps) or attack the parasites once they have infected the body.

The first method advocates the use of mosquito nets and mosquito repellents such as permethrin to prevent mosquitoes from biting. The second form of treatment uses a chemical called Quinine present in the bark of a cinchona tree. A form of drug chloroquine has proven very effective against malaria even though it is not a vaccine.

To learn more about malaria or other related diseases, please visit BYJU’S.

Plasmodium is a genus of parasitic protozoans that are known to infect the red blood cells in mammals and causes an infectious disease called malaria. Some species of plasmodium such as P.ovale, P.vivax, P.malariae and P.knowlesi are known to cause malaria.

What are some symptoms of malaria?