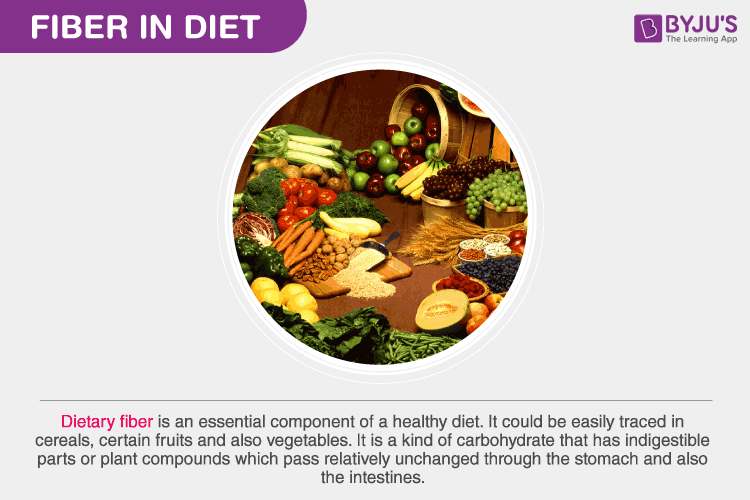 Dietary fiber is an essential component of a healthy diet. It could be easily traced in cereals, certain fruits and also vegetables. It is a kind of carbohydrate that has indigestible parts or plant compounds which pass relatively unchanged through the stomach and also the intestines. Since it could pass relatively unobstructed within the stomach and intestines, it keeps the digestive system in our body healthy. Other names by which the fiber is known include ‘bulk’ and ‘roughage’. The fibers are bulky and some fiber forms are soluble in water and are not so bulky or even rough.

Dietary fiber prevents heart disease, diabetes, weight gain and some cancers. It even contributes to some of the other processes like stabilizing glucose and also the cholesterol levels. In other countries with traditional diets of high-fiber, diseases like bowel cancer, coronary heart disease, and diabetes are known to be much less or common than in other countries. They help in weight loss too, since it fills the belly, acting somewhat like the sponge, it is slower to be digested and absorbed hence makes one feel full. It also provides bulk, which aids elimination and that is how it helps lower blood cholesterol. Children between the age group of four and eight should ideally consume around 18 g of fibre each day.

Consuming a low-fiber diet could give rise to various disorders like constipation. The small, hard and dry faecal matter which is hard to pass, diverticulitis or the small hernias from the digestive tract occur due to constipation over a long time. The syndrome named irritable bowel have symptoms like pain, bloating and flatulence of the abdomen, overweight, and also obesity, diabetes characterized by too much of glucose within the blood and colon cancer, being some other disorders.

The sources of fibers include beans as in chili, soup; whole grains, brown rice, which offers more fiber than white rice; popcorn; nuts like almonds, pecans, and walnuts; baked potato along with its skin; bran cereal; oatmeal and berries.

To know more about the topics discussed above, visit BYJU’S.