“Gene regulation can be defined as any kind of alteration in the gene to give rise to a different expression which might result in a change in the synthesized amino acid sequence.”

Gene expression is basically the synthesis of the polypeptide chain encoded by a particular gene. Therefore, we can say that the expression of the gene can be quantified in terms of the amount of protein synthesised by the genes.

Let’s learn about the regulation of gene expression in prokaryotes with the example of Lac Operon.

We can infer that the gene regulation can take place at various steps of gene expression which includes the following:

The regulation of the expression of the gene can be explained with the example of an enzyme, say peroxidase in bacteria. This enzyme catalyzes the hydrolysis of hydrogen peroxide to water and oxygen.  Now, if the bacteria are moved to another environment where they fail to manufacture hydrogen peroxide, the enzyme no longer plays its role. In such a situation, the bacteria will not synthesize the enzyme anymore. Thus, we can say that the environmental, metabolic and physiological condition regulates the expression of genes.

Gene regulation in prokaryotes is most extensively observed at the initiation of transcription. Thus, the gene expression during transcription initiation is affected by regulation. The regulation usually takes place in the expression of the RNA polymerase at the promoter site. This affects the accessory proteins which bind to the recognition sites. These accessory proteins can regulate the promoter site in two ways:

In Operons, the operator is situated right next to the promoter where the regulator binds to control its entire functioning.

“Lac operon is an operon or a group of genes with a single promoter that encode genes for the transport and metabolism of lactose in E.coli and other bacteria.” 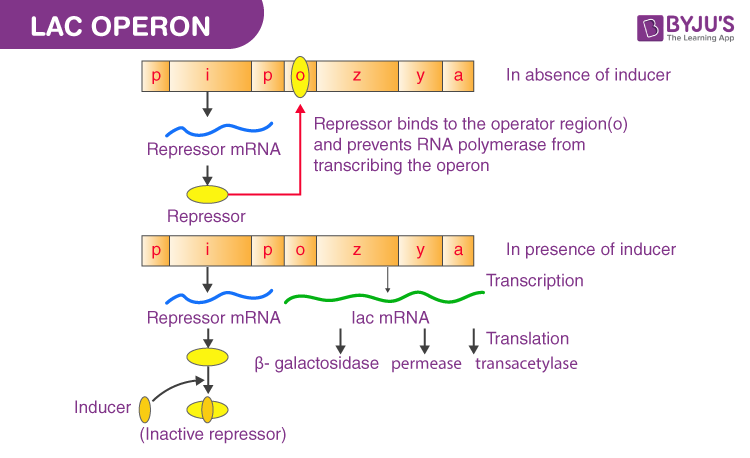 Hence, all these genes help in lactose metabolism. In lac operon, lactose acts as an inducer. If lactose is provided in the medium for the bacteria, the regulatory gene is activated. The inducer will bind to the repressor protein and render it inactive which allows transcription of the operon. Thus, the lac operon is negatively regulated in this case.

Stay tuned with BYJU’S to learn more about Lac Operon concept, diagram and Regulation of Gene Expression in prokaryotes and eukaryotes. You can also refer to the lac operon notes mentioned here for the better understanding of the concept.