Difference Between Gene and DNA

Gene and DNA are two terminologies used primarily in the field of genetics. In general, a gene is a short section of DNA and DNA- Deoxyribonucleic acid is a molecule which carries the genetic instructions or the hereditary materials. 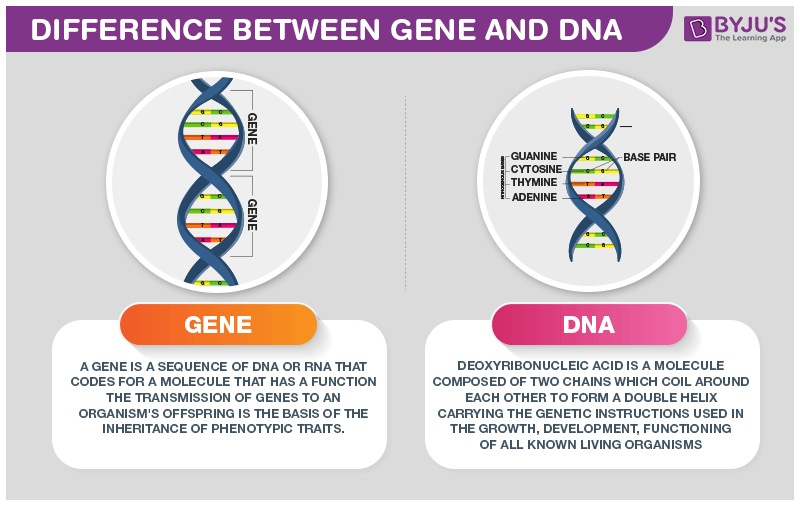 Genes are functional units of heredity as they are made of DNA. It is a subdivision of DNA and is mainly passed down from parents to their children. Genes are generally organized and packaged in components called chromosomes.

Overall, human beings have 23 pairs or 46 chromosomes. A set of chromosomes are passed on from a child’s mother, and another set of chromosomes comes from the child’s father. There are about thirty thousand genes in every cell of the human body. They play a vital role in controlling the functions of both DNA and RNA.

It is a biomolecule made out of two long, twisted strands, containing complementary genetic information. These strands of DNA holds the blueprint for all the living organisms.

DNA was discovered in the year 1869 by the Swiss biologist Johannes Friedrich Miescher. The complete structure of the DNA molecule resembles a ladder which is twisted at both the ends and is composed of nucleotides – sugar, phosphate groups, and nitrogen bases. DNA is the genetic material, which is involved in carrying the hereditary information, replication process, mutations, and also in the equal distribution of DNA during the cell division.

The difference between DNA and gene are summarized below

In conclusion, the difference between DNA and gene is quite apparent. DNA is present on the genes, which make up the functional unit of heredity.

To learn more about the difference between Gene and DNA, or any other article, visit BYJU’S.

Test your Knowledge on Genes And DNA!
Q5