“Linkage and recombination are the phenomena that describe the inheritance of genes.”

In linkage, two or more genes linked together are always inherited together in the same combination for more than two generations, whereas in recombination the genetic material is exchanged between different organisms which leads to the production of offsprings with the combination of traits.

The chromosomal theory of inheritance came into existence long after Mendelian genetics. The lack of advanced technology and physical proof were two reasons for the rejection of Mendel’s concept of genetics. However, later experiments confirmed Mendel’s results.

Biologists developed the chromosomal theory of inheritance. The work was further carried forward and proved by T.H.Morgan. This led to the concept of linkage and recombination of the genes.

Morgan carried out a dihybrid cross between white-eyed and yellow-bodied females and red-eyed and brown-bodied males. Self-crossing of the F1 generation surprisingly produced an F2 generation without being the ratio of 9:3:3:1. The outcome exhibited a divergence from Mendel’s dihybrid cross in peas.

Morgan noted that while crossing a set of characters, two genes did not follow Mendel’s law as they did not divide as per the law. The likelihood of achieving a parental combination if two genes are situated on the same chromosome was relatively higher in the subsequent generation in comparison to the non-parental combination. The physical connection of genes was referred to as linkage.

Genes are said to be linked when genes for different traits are located in similar chromosomes and hence are tied to each other. It is a deviation from the Mendelian principle of independent assortment that is appropriate to be applied to the genes that are situated on different chromosomes.

The term genetic recombination described the non-parental gene combinations in a dihybrid cross. 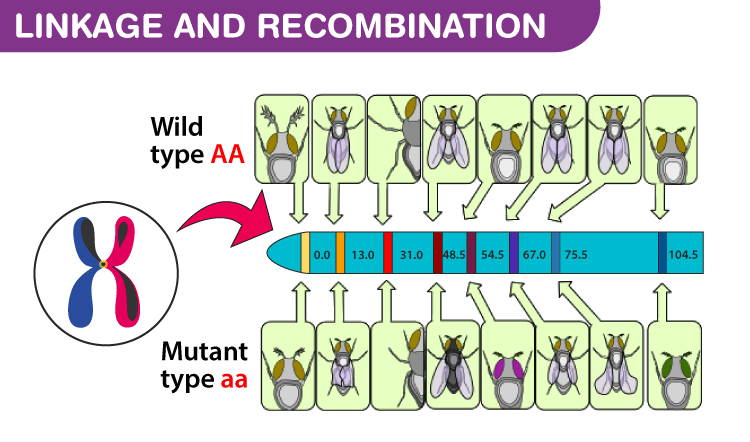 Additionally, they observed that the likelihood of recombination is reliant on how influential the linkage is. In other terms, though two genes are linked on chromosomes, the genes may or may not be linked tightly.

Once the linked genes were identified, the recurrence of linked genes also determined the expression of characteristics in the next generation.

A student of Morgan, Sturtevant discovered the site of linked genes on a chromosome by estimating their frequency of genetic recombination through the gene mapping process. This method of producing a link map was widely used during the Human Genome Project.

Linkages can be classified into two types established on the absence or presence of non-parental combinations or new combinations, namely:

A linkage is said to be complete when two or multiple characteristics are inherited and normally surface in two or further generations in their parental or original combinations, they are known as complete linkage. These particular genes do not generate combinations that are non-parental. The genes that exhibit these linkages are located nearby in the same chromosome. Examples – genes for long wings and grey body in male Drosophila

It is displayed by genes that generate some portion of non-parental combinations. These genes are situated at a distance on the chromosomes which can be attributed to the occasional or accidental deconstruction of chromosomal segments while crossing over.

Linkage And Crossing Over

Linkage is the tendency of genes present in the chromosome to stay intact and transfer to the next generation whereas crossing over is the exchange of chromosomal sections to disrupt built links and form new linkages.

Linkages assist in maintaining a newly improved variety, crossing over, on the other hand, forms as a source of variations to produce new varieties.

Crossing over, in other terms, is the exchange of segments observed in homologous chromosomes between non-sister chromatids and takes place during the pachytene stage of the prophase I in the cell division process of meiosis and always takes place within linked genes. The recombination of linked genes that crossing over produces plays a significant role in evolution.

Recombination is a process of producing new combinations of alleles by the recombination of DNA molecules. It is also referred to as genetic recombination, as there is an exchange of genetic material (DNA) between two different chromosomes or between different regions of the same chromosome. This process is observed in both eukaryotes and prokaryotes. It increases the genetic diversity of sexually reproducing organisms.

Recombination can be of the following two types:

This type of recombination occurs between chromosomes of similar sequences and is carried out during meiosis.

This occurs between chromosomes that are not similar.

This is observed between very short sequences that usually contain similarities.

Mitotic recombination occurs during interphase. However, this type of recombination is usually harmful and can result in tumors. It increases when the cells are exposed to radiation.

The prokaryotic cells undergo recombination through one of the three processes:

Let us take an example of freckles and red hair to understand the recombination of linked genes.

Freckles and red hair happens in people because the genes for both are present on the same chromosome. During homologous recombination, the DNA is rarely split between the two genes.

For more details on linkage and recombination of the gene, keep visiting BYJU’S Website or download the BYJU’S app for further reference.

How are linkage and recombination different from each other?

Linkage helps to keep the genes together in the same chromosome, whereas recombination is the process where DNA segments separate during crossing over in meiosis.

Are crossing over and recombination the same thing?

Crossing over occurs when the two homologous chromosomes break and then reconnect to different end pieces. If the chromosomes break at the same locus in the base pair sequence it results in the exchange of genes and is called recombination.

What are the different types of linkage?

The two different types of linkage are:

What factors can cause linkage disequilibrium?

The factors that cause linkage disequilibrium are: