“Lipids are organic compounds that contain hydrogen, carbon, and oxygen atoms, which forms the framework for the structure and function of living cells.”

These organic compounds are nonpolar molecules, which are soluble only in nonpolar solvents and insoluble in water because water is a polar molecule. In the human body, these molecules can be synthesized in the liver and are found in oil, butter, whole milk, cheese, fried foods and also in some red meats.

Let us have a detailed look at the lipid structure, properties, types and classification of lipids. 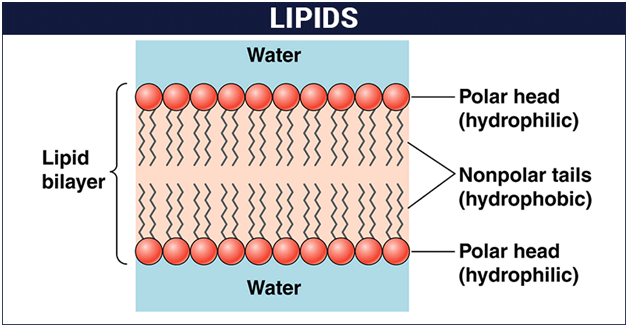 Lipids are a family of organic compounds, composed of fats and oils. These molecules yield high energy and are responsible for different functions within the human body. Listed below are some important characteristics of Lipids.

Lipids are the polymers of fatty acids that contain a long, non-polar hydrocarbon chain with a small polar region containing oxygen. The lipid structure is explained in the diagram below: 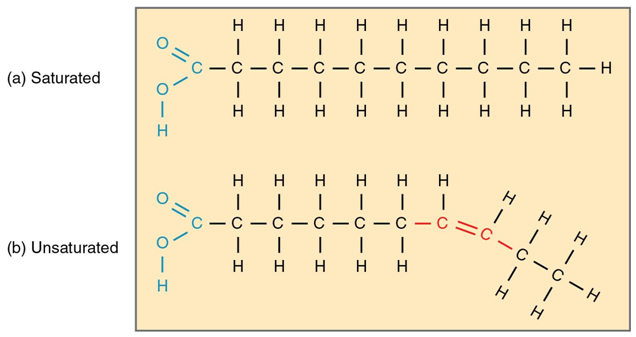 Lipids can be classified into two main classes:

A saponifiable lipid comprises one or more ester groups, enabling it to undergo hydrolysis in the presence of a base, acid, or enzymes, including waxes, triglycerides, sphingolipids and phospholipids.

Further, these categories can be divided into non-polar and polar lipids.

Nonpolar lipids, namely triglycerides, are utilized as fuel and to store energy.

Polar lipids, that could form a barrier with an external water environment, are utilized in membranes. Polar lipids comprise sphingolipids and glycerophospholipids.

Fatty acids are pivotal components of all these lipids.

Within these two major classes of lipids, there are numerous specific types of lipids important to live, including fatty acids, triglycerides, glycerophospholipids, sphingolipids and steroids. These are broadly classified as simple lipids and complex lipids.

Esters of fatty acids containing groups in addition to alcohol and a fatty acid.

These include fatty acids, glycerol, steroids, other alcohols, fatty aldehydes, and ketone bodies, hydrocarbons, lipid-soluble vitamins, and hormones. Because they are uncharged, acylglycerols (glycerides), cholesterol, and cholesteryl esters are termed neutral lipids. These compounds are produced by the hydrolysis of simple and complex lipids.

Some of the different types of lipids are described below in detail.

Lack of carbon-carbon double bonds indicate that the fatty acid is saturated. The saturated fatty acids have higher melting points compared to unsaturated acids of the corresponding size due to their ability to pack their molecules together thus leading to a straight rod-like shape.

Unsaturated fatty acid is indicated when a fatty acid has more than one double bond.

“Often, naturally occurring fatty acids possesses an even number of carbon atoms and are unbranched.”

On the other hand, unsaturated fatty acids contain a cis-double bond(s) which create a structural kink that disables them to group their molecules in straight rod-like shape.

Fats play several major roles in our body. Some of the important roles of fats are mentioned below:

Waxes are “esters” (an organic compound made by replacing the hydrogen with acid by an alkyl or another organic group) formed from long-alcohols and long-chain carboxylic acids.

Waxes are found almost everywhere. The fruits and leaves of many plants possess waxy coatings, that can safeguard them from small predators and dehydration.

Fur of a few animals and the feathers of birds possess the same coatings serving as water repellants.

Carnauba wax is known for its water resistance and toughness (significant for car wax).

Membranes are primarily composed of phospholipids that are Phosphoacylglycerols.

The name phospholipid is derived from the fact that phosphoacylglycerols are lipids containing a phosphate group.

Our bodies possess chemical messengers known as hormones, which are basically organic compounds synthesized in glands and transported by the bloodstream to various tissues in order to trigger or hinder the desired process.

Steroids are a kind of hormone that is typically recognized by their tetracyclic skeleton, composed of three fused six-membered and one five-membered ring, as seen above. The four rings are assigned as A, B, C & D as observed in the shade blue, while the numbers in red indicate the carbons.

There are different types of lipids. Some examples of lipids include butter, ghee, vegetable oil, cheese, cholesterol and other steroids, waxes, phospholipids, and fat-soluble vitamins. All these compounds have similar features, i.e. insoluble in water and soluble in organic solvents, etc.

Lipids are organic compounds that are fatty acids or derivatives of fatty acids, which are insoluble in water but soluble in organic solvents. For eg., natural oil, steroid, waxes.

How are lipids important to our body?

How are lipids digested?

The enzyme lipase breaks down fats into fatty acids and glycerol, which is facilitated by bile in the liver.

What is lipid emulsion?

It refers to an emulsion of lipid for human intravenous use. These are also referred to as intralipids which is the emulsion of soybean oil, glycerin and egg phospholipids. It is available in 10%, 20% and 30% concentrations.

How are lipids metabolized?

Lipid metabolism involves the oxidation of fatty acids to generate energy to synthesize new lipids from smaller molecules. The metabolism of lipids is associated with carbohydrate metabolism as the products of glucose are converted into lipids.

How are lipids released in the blood?

The medium-chain triglycerides with 8-12 carbons are digested and absorbed in the small intestine. Since lipids are insoluble in water, they are carried to the bloodstream by lipoproteins which are water-soluble and can carry the lipids internally.

What are the main types of lipids?

What are lipids made up of?

Lipids are made up of a glycerol molecule attached to three fatty acid molecules. Such a lipid is called triglyceride.

Test your knowledge on Lipids
Q5