Parturition is another word that describes childbirth. Both labour or delivery terminologies refer to Parturition. Overall, parturition is the final stage of the pregnancy, which every woman has to undergo to delivery a baby. During this period, a baby grows inside a woman’s uterus.

Let’s learn in detail about the Parturition and the three different stages of parturition.

Parturition means childbirth. It is also known as labour. It is the mechanism of signalling the onset of labour (or) a procedure of delivering a child after the completion of pregnancy period. The developed child is born with the release of cortisol.

During parturition process, the cervix dilates and relaxes. Along with cortisol, oxytocin and estrogen hormones are released to begin the milk production and labour.

During parturition, the uterus contracts to push the fetus towards the cervix and continues until the fetus comes down the birth canal. In this process, the head should be first to come out.

After parturition, the uterus releases the placenta and it passes out immediately after the fetus is born. Lactation begins and the first milk is called colostrum. This milk contains antibodies, which is required for a newborn baby to protect it against infectious diseases and other allergies. 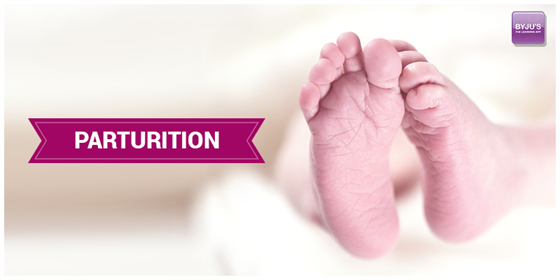 Signs and Symptoms of Parturition

The signs of Parturition includes:

There are three stages of Parturition, which includes:

This stage begins with the onset of labour and continues until the cervix is completely dilated. Dilation is divided into two phases:

This stage starts at full dilation and continues until birth. This stage is also divided into two phases:

This stage ends with the childbirth and the umbilical cord is clamped.

In this stage, the placenta is removed and the contractions of uterus decrease simultaneously.

The female hormones involved in parturition include:

Q.1. List out the functions for the following female reproductive organs – Vagina, Uterus, Ovaries and Oviduct.

Listed below are the functions of female reproductive organs:

Q.2. Which hormones are released during the process of parturition?

During the process of parturition or the childbirth oxytocin, estrogen and cortisol hormones are released.

Q.3. Which hormones are responsible for ovarian changes during the menstrual cycle?

Q.4.List out the three stages of Parturition

There are three stages of Parturition:

Q.5.Which hormone is involved in the contractions of uterine?

Estrogen, the primary female sex hormone is primarily involved in the contractions of uterine.