For being a mother, a woman has to go through various stages in life. Let’s see the stages involved in the childbirth starting from pregnancy followed by parturition and lactation. 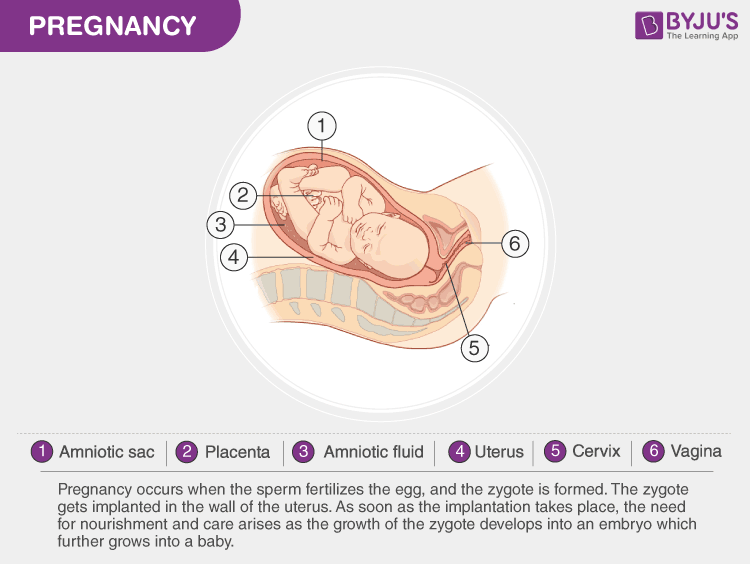 Pregnancy occurs when the sperm fertilizes the egg, and the zygote is formed. The zygote gets implanted in the wall of the uterus. As soon as the implantation takes place, the need for nourishment and care arises. The zygote develops into an embryo which further grows into a baby. This responsibility is taken up by a layer formed between the baby and the mother, called the placenta. The placenta is formed by chorion and the uterine tissue.  This layer plays many roles during pregnancy, which are briefly discussed as follows:-

As soon as the implantation takes place, the fertilized cell mass or embryo starts showing the triploblastic nature of human beings by dividing into the three layers of cells. This gives rise to different organs during development – ectoderm, mesoderm, and endoderm.

All these steps after implantation lead to the development of the baby and it takes nine months in humans. The development is very gradual and steady. At first, the heart of the embryo is formed, followed by limbs, major organs, the appearance of hair and so on. By the end of 9 months, the fetus is completely developed.

It is the process of the contraction of the uterus at regular intervals that helps in the delivery of the baby at the end of pregnancy. The signals that the fully developed fetus sends through the placenta for ejection is called Foetal ejection reflex. These signals induce muscular contractions.

The time period from fertilization to childbirth is called the gestation period.

It is the process of production of milk by the mammary glands at the end of pregnancy. The milk produced initially by the glands is called colostrum. This milk is crucial for the baby as it provides the child with the initial immunity.

This was a brief explanation of pregnancy, parturition, and lactation.