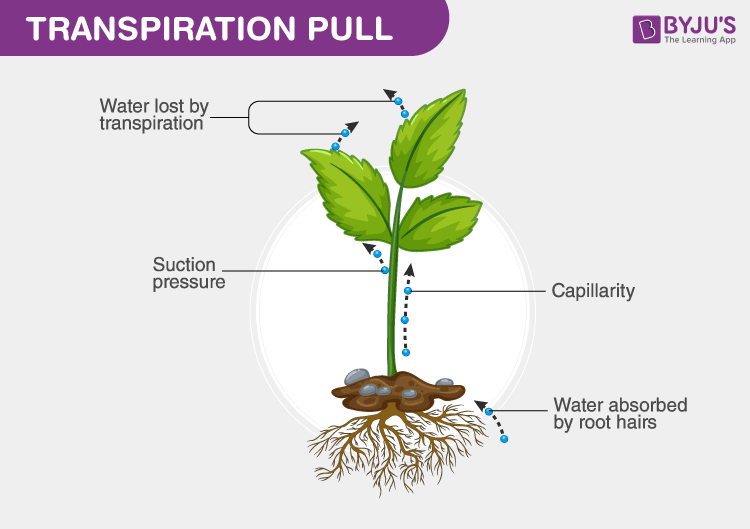 A process in which the moisture and other gaseous wastes are excreted through the stomata of the leaf, lenticels of the stem and fruits are termed as Transpiration. In this process, the water absorbed by the root tips are excreted out into the atmosphere by the leaves and stems of respective plants to keep the plants cool and to allow the root to absorbs more water and other important nutrients from the soil. Light, humidity, temperature, wind and the leaf surface are the factors affecting the rate of transpiration in plants.

A transpiration pull could be simply defined as a biological process in which the force of pulling is produced inside the xylem tissue. This force helps in the upward movement of water into the xylem vessels. In this process, loss of water in the form of vapours through leaves are observed. This biological process is carried out in all higher plants and trees as their stems are surrounded by bundles of fine tubes, which are made from a woody material known as xylem.

Transpiration pull is also referred as suction force and this force is used to draw the water in an upward direction from the roots to the leaves. The amount of water received by the leaves are used for the photosynthesis and the excess amount of water is released into the atmosphere in the form of vapours through the openings in the leaves known as stomata.

The Phenomenon of Transpiration Pull-in Plants

In this process, the water molecules combine together to form a column in the xylem. The pressure created by transpiration pull applies a force on the combined water molecules and helps them to move in an upward direction into the mesophyll.

The mechanism involved in this biological process is based on the upward movement of water from the tip of the root to the aerial parts of the plant body which is called ascent of sap. During transpiration, a negative hydrostatic pressure is generated in the mesophyll cells to draw water from the roots to the veins of the leaves.

The Role of Transpiration Pull in Plants

Transpiration pull in plants results from the evaporation or excretion of water from the surface of cells in the leaves. This process helps in the proper flow of water and protects the plant from an embolism.

The whole mechanism of transpiration pull in plants could be visualised to a person drawing a bucket full of water from a well when he is in need of water.