Acromegaly is a hormonal disorder that leads to the abnormal growth of hands, feet and face as shown in the below image This disorder is mainly caused due to the excessive production of the Growth Hormone(GH) produced by the Pituitary gland. 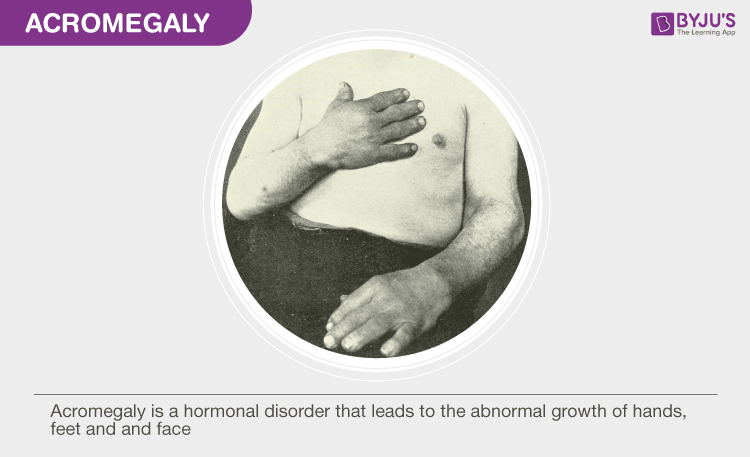 What are the Causes of Acromegaly?

The most common cause of this disorder is the overproduction of Growth Hormone by the pituitary gland. The pituitary gland, a small gland situated at the base of your brain and called the Master Gland, as it synthesis some of the important hormones in the body. Due to the excessive growth of this gland, the surrounding nerve tissues and optic nerves get compressed. This results in the growth of the bone and the enlargement of organs. People suffering from this disease have much larger bones when compared to other people. It is estimated that about 95% of the people affected by this disease have a tumour which affects the pituitary gland.

What are the Symptoms of Acromegaly?

The sign and symptoms vary from patient to patient. Symptoms tend to develop gradually and the changes may or may not be noticed for years. There is a wide range of symptoms, some of the common symptoms related to Acromegaly are given below:

How is Acromegaly diagnosed?

To diagnose this hormonal disorder, a series of tests are performed to confirm the overproduction of growth hormone in the body. The test includes:

How is Acromegaly Treated?

At the beginning stage of this disease, the symptoms would be too low. Acromegaly is mostly found in the adults, between the age of 30 to 50, but there are chances of getting the symptoms at any age. Hence, proper treatment would reduce it to some extent. Generally, the treatment for this disorder varies with the patient’s age, health, and how far the condition is. There are three ways to treat acromegaly:

If this disease is left untreated, it can cause many serious health complications. They include:

1. How common is acromegaly?

Acromegaly is a rare disorder that affects both males and females and occurs in approximately 50 to 70 people per million. According to the researchers estimate that three out of every million develop the disorder every year and can occur at any age after puberty.

2. Who is more affected by acromegaly?

This hormonal disorder is seen both in male and female patients and is mostly diagnosed between 30 to 50 years of age.

No, acromegaly is not inherited. It develops spontaneously in the pituitary gland by excessive secretion of growth hormone in the body.

4. What is the difference between gigantism and acromegaly?

Explore more about Acromegaly or other related topics @ BYJU’S Biology