“Botany is the branch of Biology that deals with the study of plants.”

Botany is one of the world’s oldest natural sciences. Initially, Botany included all the plant-like organisms such as algae, lichens, ferns, fungi, mosses along with actual plants. Later on, it was observed that bacteria, algae and fungi belong to a different kingdom.

Read on to explore more about botany meaning by referring to the below-mentioned topics – branches and importance of botany. 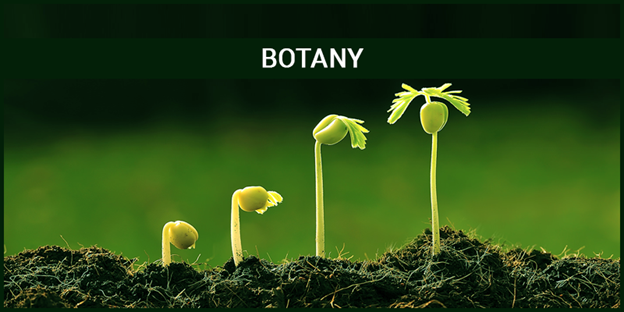 Plants are the major source of life on earth. They provide us with food, oxygen and a variety of raw materials for various industrial and domestic purposes. That is why humans have always been interested in plants since time immemorial.

The Greek scholar Theophrastus was one of the early Botanists of the world. He is also known as the “Father of Botany” due to his major writings on plants. One of his books called “Enquiry into Plants” classified the plants based on the geographical ranges, sizes, uses and growth patterns. The other work called “On the Causes of Plants” explained the economics of growing plants.

Dioscorides was another Greek physician from 90-40 A.D. who wrote an encyclopedia about herbal medicines known as “De Materia Medica”. This book was used as an important medicinal guidebook for over 1500 years until the invention of the compound microscope.

The invention of the compound microscope by Robert Hooke in 1665 marked the advancement of scientific knowledge in the field of Botany. It helped in the study of the anatomy and physiology of plants. The discovery of chlorophyll helped in understanding the process of photosynthesis. Gregor Mendel studied the genetic inheritance in plants through his experiments on pea plants.

With the advent of biotechnology and genetic engineering, scientists are able to understand the plant structure in a better way and have devised better ways of improving crop yield and crop health.

Botany is divided into a number of branches:

It is the study of organisms and environmental conditions that are responsible for causing diseases in plants, the mechanisms by which the disease occurs, and the methods of controlling plant diseases.

Plant ecology studies the distribution of plants, how do the environmental factors affect plants and the interaction between plants and other organisms.

This is the branch of botany that deals with the recovery and identification of plant fossils, thereby, studying the evolutionary history of plants.

It is the branch of Botany in which the scientists study as to how were the plants used by the people in the past. Understanding a plant also helps in understanding the medicinal and spiritual significances of a plant in the past.

Forensic botany is the use of plants and parts of plants such as pollens, seeds, leaves, etc. to investigate criminal or non-criminal cases, legal disputes or questions, to discover the cause of death or former location.

Plants are an integral part of human life. They are used in various aspects of day to day lives. Botany studies the characteristics and uses of these plants and hence are very important.

The importance of Botany can be understood by the following points:

Discover more about Botany, its meaning, history, branches, importance and other related topics only at BYJU’S Biology