Plants need water, minerals, and food for their growth and survival. Water and minerals are taken up by roots and leaves prepare the food. These are then transported to the other parts of the plants. When we talk about transport, there should be some means of transportation. Diffusion is the main pathway of transportation in plants.

Let us study about diffusion as a means of transport in plants in detail. 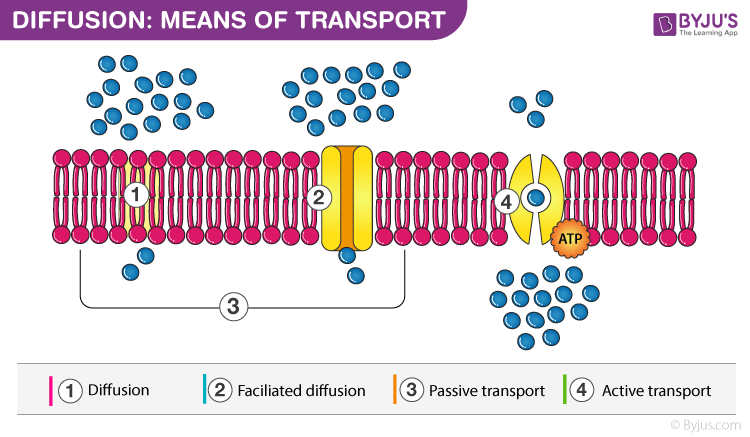 Diffusion is a very important process for photosynthesis where carbon dioxide from the stomata diffuses into the leaves and finally into the cells. Also, during transpiration, the water and oxygen diffuse from the leaves into the environment.

Diffusion as Means of Transport in Plants

Transportation in plants is an important and natural phenomenon which takes place in all the higher plants. All plants require some essential organic material and inorganic material for the proper functioning of cells and tissues. This process is carried out by three means of transport.

Types of Diffusion in Plants

Diffusion in plants is of two major types:

The diffusing molecules do not combine with the constituents of the membrane.

The molecules diffuse through the membrane with the help of transporter proteins.

Following are the important factors affecting diffusion in plants:

The rate of diffusion is directly proportional to the increase in temperature.

The rate of diffusion is inversely proportional to the square root of density of the gas.

Importance of Diffusion in Plants

The process of diffusion is important for the plants in the following ways:

Learn more about diffusion in plants, its types, importance and other related topics @ BYJU’S Biology.

Test your Knowledge on diffusion means of transport
Q5