Let us understand mutation in terms of genetic codes.

Genes are the functional units of heredity of organisms. It is mainly responsible for the structural and functional changes and for the variation in organisms which could be good or bad. Even a minute change in the DNA sequence could alter the amino acids to be produced and proteins to be synthesized.

The phenomenon of change occurring within the DNA sequence is termed as the mutation. This is mainly caused either by the internal factors or through external factors, including smoking, UV rays, etc. Apart from these factors, there are other causes for the DNA variation in an organism, and it is the recombination. Mutation leads to the alteration in the expression of the genotype and phenotype. Eventually, this might affect cells or even damage the organism. 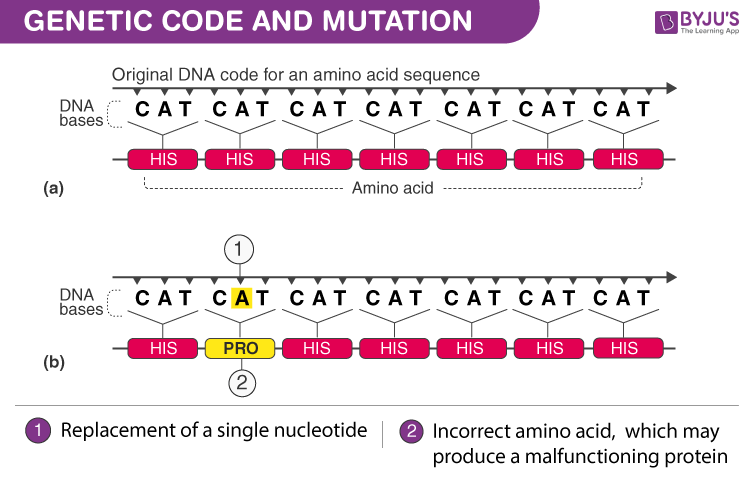 DNA sequences build the genes of organisms which in turn encode for particular proteins. Any fluctuation in this sequence, for example, mishaps during DNA transcription, might lead to a change in the genetic codes, which alter the protein synthesis.

There are different types of mutation and are mainly based on the range of alternation. It could begin with a single base pair to a segment of DNA. A variation which is caused by the change in the building block and base pair of DNA is termed as a point mutation. An example of point mutation is Sickle cell anaemia.

The sickle cell anaemia is a disease condition caused due to the change in a single base pair of the gene. In this condition, the codon for the amino acid glutamate is replaced by that for valine. When the reading frame of the genetic code is altered by the insertion or deletion of one or two bases, it is called frame-shift mutation.

MAN AND THE RED SEA

MAN CAN DTH ERE DSE A

MAN CAT AND THE RED SEA

Translation is the process of conversion of nucleic acid information into amino acids.

3. Name any disease caused due to the change in a single base pair of the gene.

For more detailed information about the Genetic Code And Mutation, visit BYJU’S.