Plant cells are eukaryotes, composed of specialised cellular organelles that differ in several fundamental factors from Animal cell. Plant cells usually consist of a thick cell wall that functions by holding them upright and also prevents from losing their shape. The plasma membrane, cytoplasm and all other cell organelles function together to keep the plant active. The vacuoles, a  fluid-filled membrane-bound organelle, located within the cytoplasm, holds the water in the plant cell. In certain conditions,  plant cells do not get a sufficient amount of water, or there is a severe loss of water from the cell. This results in the total shrinkage of the plant cell and the phenomenon are called plasmolysis.

Plasmolysis is defined as the process of contraction or shrinkage of the protoplasm of a plant cell and is caused due to the loss of water in the cell. Plasmolysis is an example of the results of osmosis and rarely occurs in nature.

The word Plasmolysis was generally derived from a Latin and Greek word plasma – The mould and lusis meaning loosening.

How do Water Pass through the Cell Membranes? 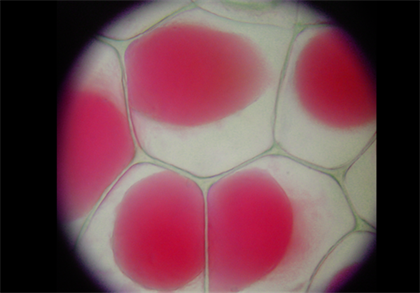 Demonstration of Plasmolysis in Rheo plant

The process of plasmolysis can be easily explained in the laboratory by placing a living cell in a strong salt solution. When the plant cells are placed in the concentrated salt solution, because of osmosis, water from the cell sap moves out. Therefore, the water travels through the cell membrane into the neighbouring medium. Finally, the protoplasm separates from the cell and assumes a spherical shape.

Normally, for this experiment, Tradescantia or Rheo plant cell, Elodea plants or onion epidermal cells are used, because they have coloured sap which can be easily observed and identified under the microscope.

There are two different types of plasmolysis and this classification is mainly based on the final structure of the cytoplasm.

During the concave plasmolysis, both the cell membrane and protoplasm shrink away and begins to detach from the cell wall, which is caused due to the loss of water. Concave plasmolysis is a reversible process and it can be revised by placing the cell in a hypotonic solution, which helps calls to regain the water back into the cell.

Plasmolysis is more common and happens in extreme cases of water loss. Some real-life examples of Plasmolysis are:

When the plasmolysed cell is placed in a hypotonic solution, (the solution in which solute concentration is less than the cell sap), the water travels into the cell, due to the higher concentration of water outside the cell. Then the cell swells and becomes turgid. This is known as deplasmolysis.

When the living cells are placed in isotonic solution(both solutions have an equal amount of solute particles), the water does not flow within or outside. Here, the water passes in and out of the cell and in an equilibrium state, and Therefore, the cells are called as flaccid.

Stay tuned with  BYJU’S Biology to learn more in detail about plasmolysis and other related concepts.