Kerala Board SSLC Class 10 Physics 2018 Question Paper solutions are the perfect resource. It helps the students to prepare most efficiently for the board exams. This resource is used by students to score well in the final exams. If any student is looking to ace the exams, then they are encouraged to practise these solutions regularly. The Class 10 exam question paper sets the foundation for most of the questions that are likely to be repeated in the Physics paper for the final exam. Students can download the PDF formats of the solved or unsolved question paper, as preferred with just a click on the listed links. For the convenience of the students, we have listed the clickable links in this article. Meanwhile, we also provide the questions and answers on the web-page.

All students who are thorough with the complete complex concepts from Physics will find it easier to gain good scores in the final exams. These students will find it easy to understand the question types that are found in the KBPE SSLC Class 10 Physics exam. Students are advised to revise the entire subject before the exam. They can also solve the previous papers of Kerala Board Class 10 Physics, after which, they can refer to the solutions and self-analyse their performance. They can also scale their preparation level for the Class 10 board exams. This will help the students to identify where they have gone wrong while answering the question paper and they can then further avoid these types of errors. These SSLC previous year question papers also give an overview of the question paper design and the marks’ distribution. Students can also gauge the difficulty level of the exams with the help of these question paper solutions. 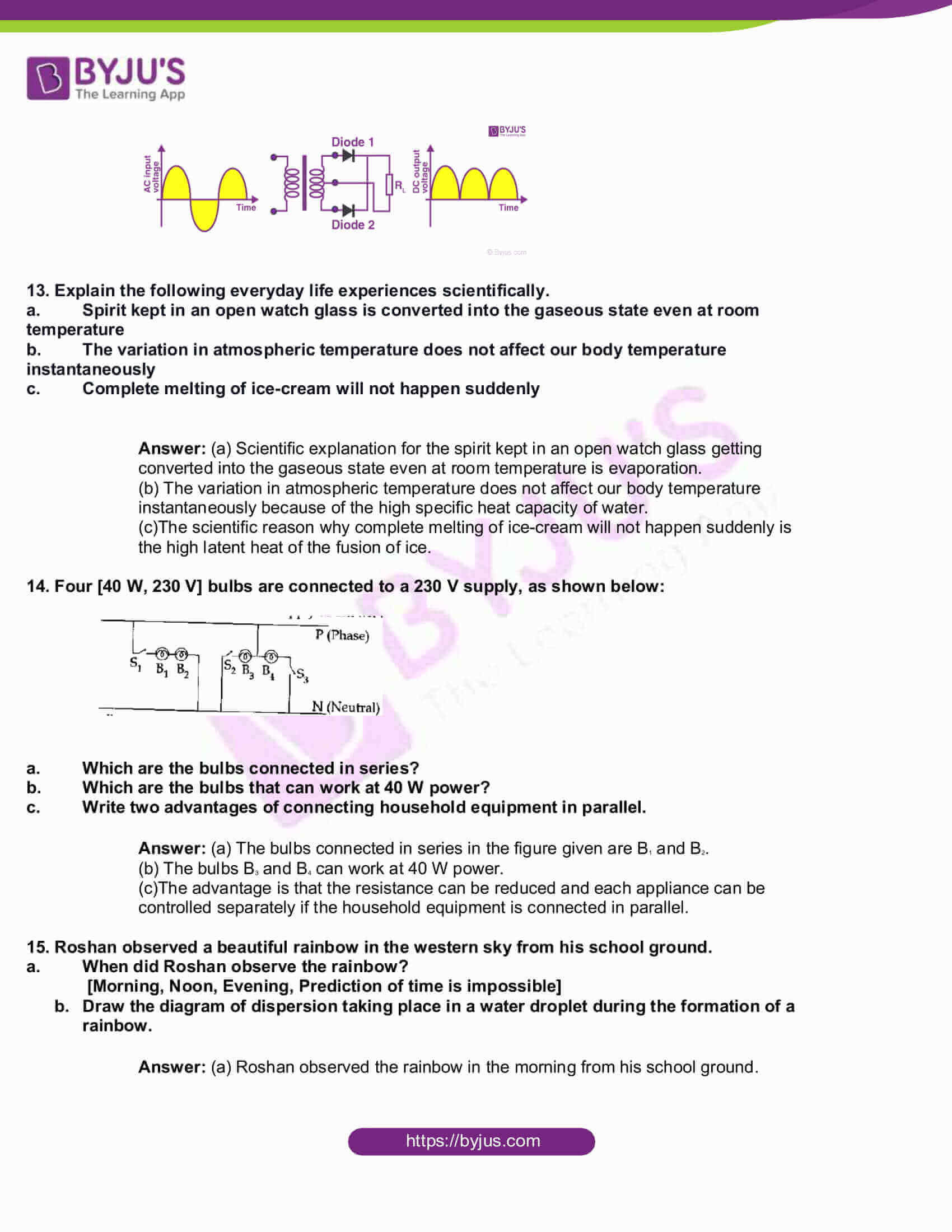 2. Solar energy is treated as the energy source of the future. Write any two solar devices working on solar energy that can be utilised in daily life.

Answer: Solar cell, Solar Cooker and Solar water heater are some solar devices that function on the solar energy that can be utilised in daily life.

3. Distinguish the relationship between the terms given below and fill in the blanks:

4. Find the odd one from the brackets below and give a reason for your selection.

Answer: Yellow is the odd man out from the colours given in the bracket. Reason for selection is that while other colours are primary colours, yellow is a secondary colour.

5. Write any two problems faced when electrical power is transmitted to distant places.

6. Correct the underlined parts of the following statements appropriately if it is wrong.

(i) Conductors having higher melting points than the circuit elements are used as fuse wire.

(ii) The amperage of the fuse wire must be reduced as the power of the equipment included in the circuit is increased.

Answer: (i) Conductors having low melting point than the circuit elements are used as fuse wire

7. A student standing in front of a huge building claps his hands. He heard its echo after 2 seconds. [Speed of sound in air is 340 m/sec]

So, the distance between the student and the building is 340 m.

(b) The characteristic of the ear behind the phenomenon called echo is the persistence of audibility.

8. Identify the electronic components from the following symbols. Write any one difference between them.

Answer: (a) The symbol (a) is for LED, while the symbol in figure (b) is for the photodiode. The main difference between both is that the LED emits light and the photodiode absorbs light.

9. The statements given below are related to a step-down transformer. Tabulate them as those related to primary and secondary.

(i) Winding with thick wire

(iii) Winding with a thin wire

Answer: The statements given are tabulated as those related to primary and secondary. They are as follows:

Winding with a thin wire

Current flowing at a higher voltage

Winding with a thick wire

Current flowing at a low voltage

10. Explain how the following arrangements are useful in power transmission.

Answer: (a) Given that H=I2Rt, you will see that when the resistance is decreased, the heat produced can also be minimised.

(b). Alternatively, when the voltage is increased, the current can be decreased, and the heat produced can be minimised.

11. Explain the reason for the following in a power generator.

Answer: (a) In a power generator, the armature is used as a stator to avoid spark because for electric energy at high potential without any insulation problem, sparking can be generated.

(b) Strong electromagnets are used as field magnet in a power generator. The reason for this is that the main advantage of an electromagnet over a permanent magnet is that the magnetic field can be quickly charged by controlling the amount of electric current in the winding.

(c) Three armature coils are arranged at 120° angular separation in a power generator to get 3 AC of different phases.

12. Analyse the given circuit diagram of a half-wave rectifier and answer the following questions.

(c) Draw the output waveform of a full-wave rectifier.

Answer: (a) The components labelled M and N are the diode and the resistor, respectively

(b) (i) Transformer – Centre tap transformer

Answer: (a) Scientific explanation for the spirit kept in an open watch glass getting converted into the gaseous state even at room temperature is evaporation.

(b) The variation in atmospheric temperature does not affect our body temperature instantaneously because of the high specific heat capacity of water.

(c)The scientific reason why complete melting of ice-cream will not happen suddenly is the high latent heat of the fusion of ice.

Answer: (a) The bulbs connected in series in the figure given are B1 and B2.

(c)The advantage is that the resistance can be reduced and each appliance can be controlled separately if the household equipment is connected in parallel.

15. Roshan observed a beautiful rainbow in the western sky from his school ground.

Answer: (a) Roshan observed the rainbow in the morning from his school ground. 16. The following diagram shows an experiment using a beaker of considerable height and a pipe [Excited tuning fork is used]. 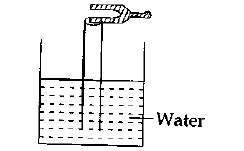 Answer: (a) The loudness of the sound produced by the tuning fork increases / varies while adjusting the height of the air column inside the pipe.

17. Answer the following question by analysing the table:

Answer: (a) The temperature difference remains the same when various amounts of heat energy are given to the above substances of equal masses due to difference in specific heat capacity.

(b) Water for which the highest amount of heat is given has a higher specific heat capacity.

(c) Lead is the substance from the above table, which exhibits the largest temperature change when the same amount of heat is given.

19. Analyse the diagram of the solar spectrum and write the answers:

Answer: (a) Infrared radiation has a wavelength greater than visible light in this spectrum.

(b) Violet is the colour with the highest frequency in the visible part of the solar spectrum.

(c) Ultraviolet radiation provided vitamin D; however, it also said to be the reason for skin cancer. Meanwhile, Infrared radiation is used in distant photography and also causes sunlight to be hotter.

20. (a) Write one example each for fossil fuels in a solid and liquid state.

(b) Which fossil fuel produces ammonia when distilled in the absence of air?

(c) Write down the process of evolution of fossil fuels on earth.

Answer: (a) The examples of fossil fuels are Coal in the solid-state and petrol in a liquid state.

(b) The fossil fuel, coal when it is distilled in the absence of air, it produces ammonia.

(c) Fossil fuels are buried flammable geologic deposits of organic substances such as dead plants, and animals that got deposited under several thousand feet of silt. These deposits decayed with time and got converted to natural gas, coal, and petroleum due to the extreme heat and pressure inside the earth’s crust.