If any student wishes to know further about the exam question paper pattern or the question types that are expected to come for the KBPE Class 10 Board Exams, then the best resource is this previous year paper with solutions that we provide in this article. Students can access the PDF version as well as on-page question answers of the Kerala Board Class 10 Biology Previous Year Paper 2018- Solved from this article. 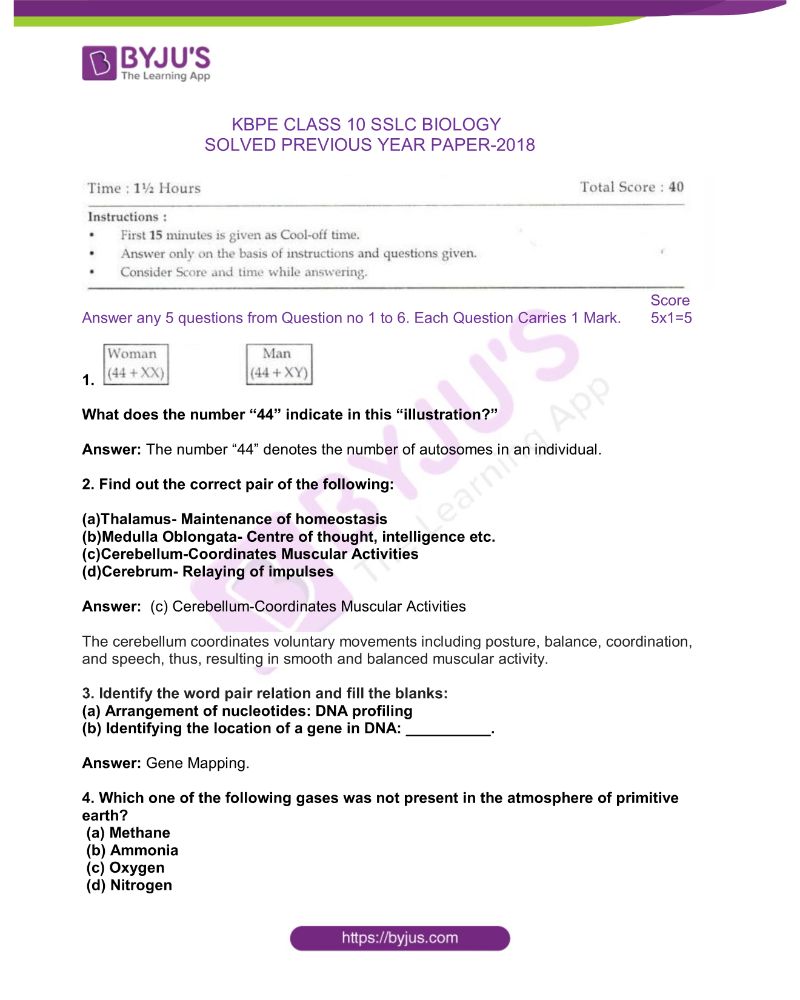 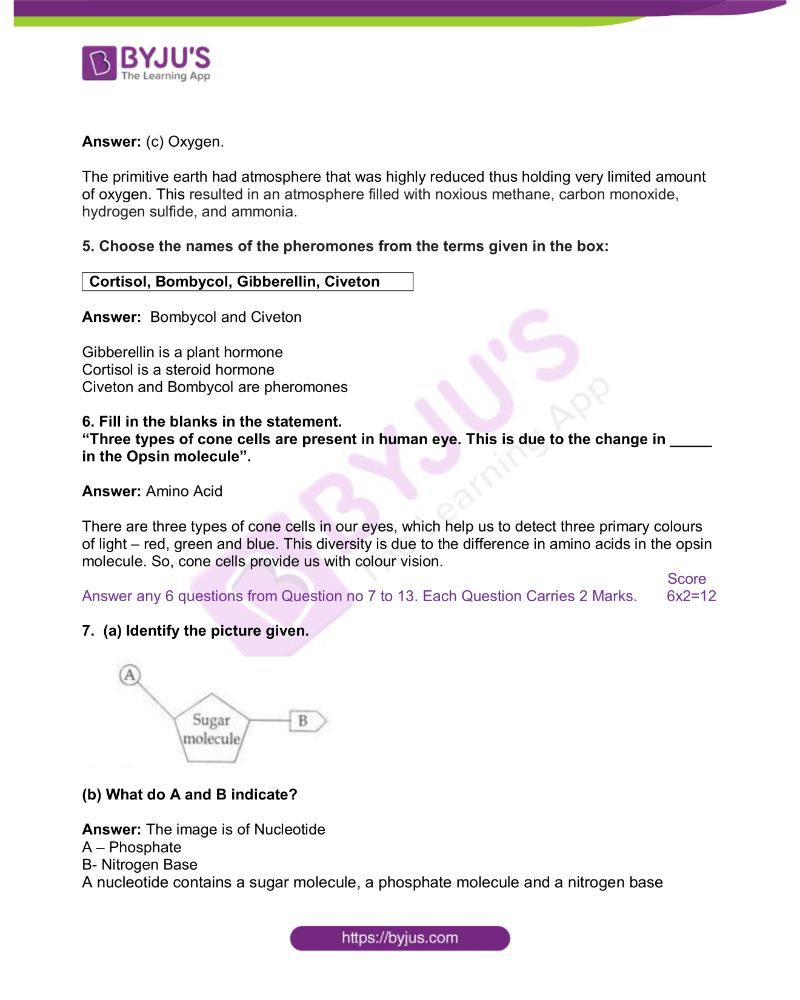 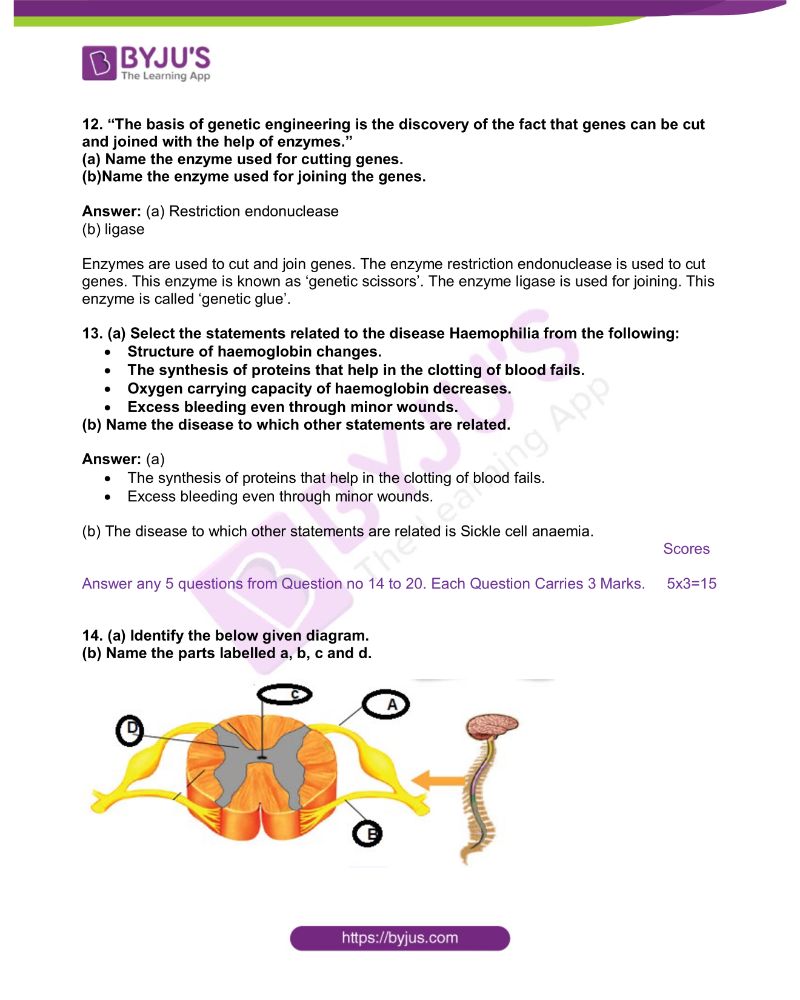 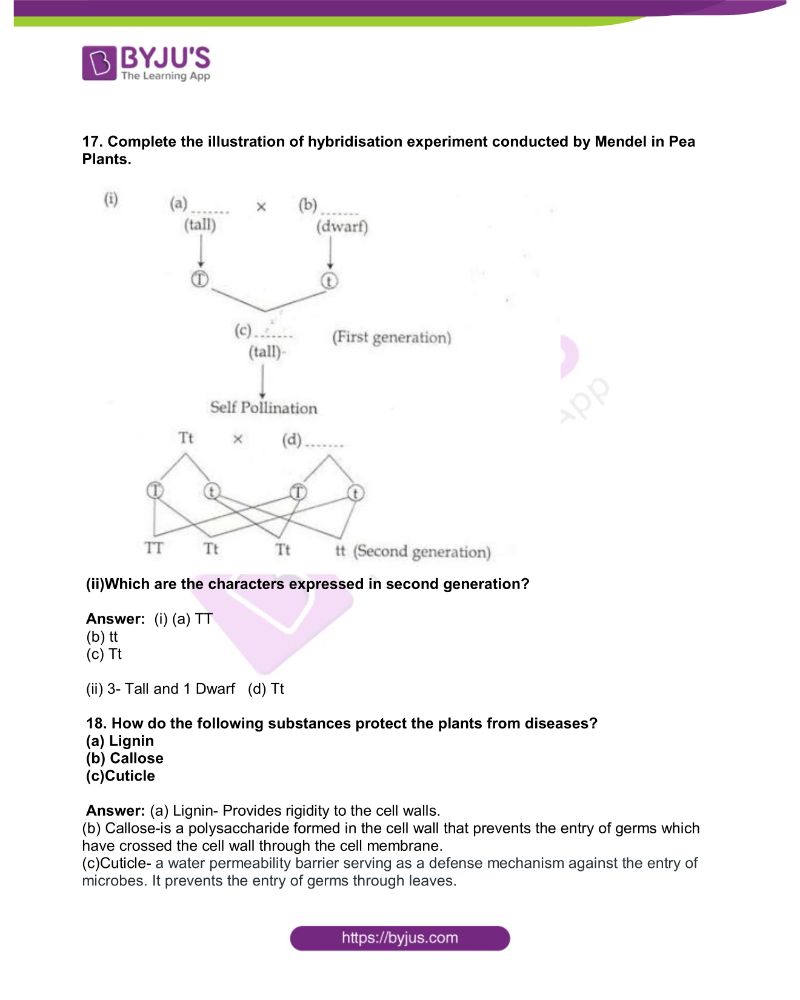 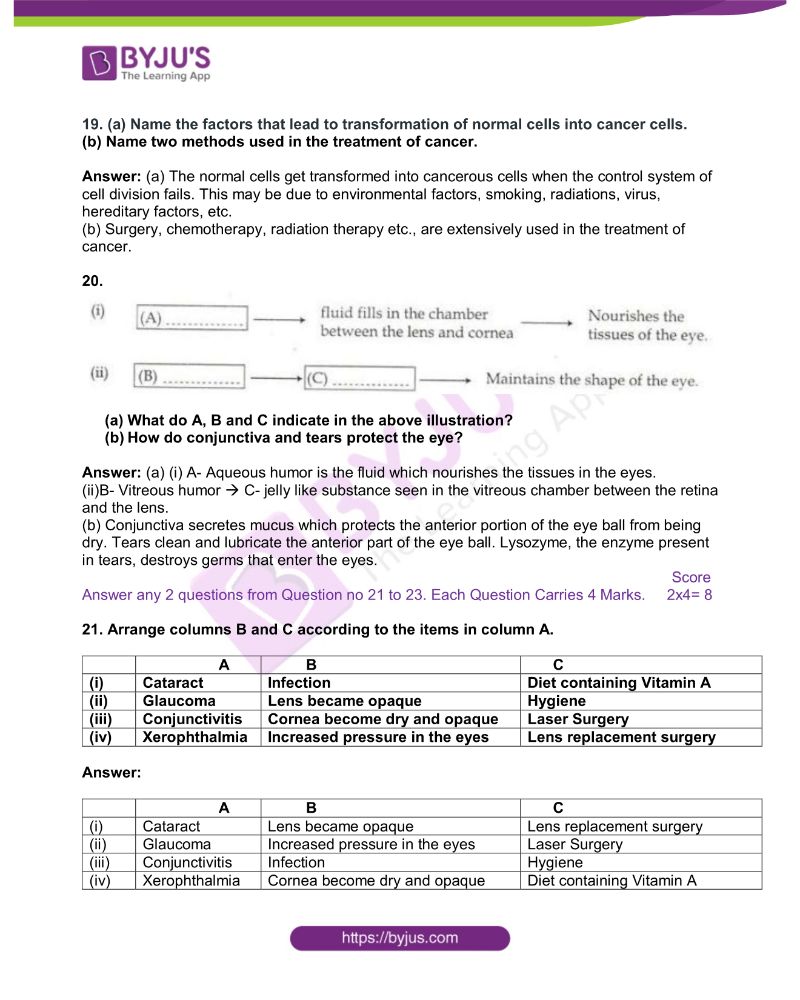 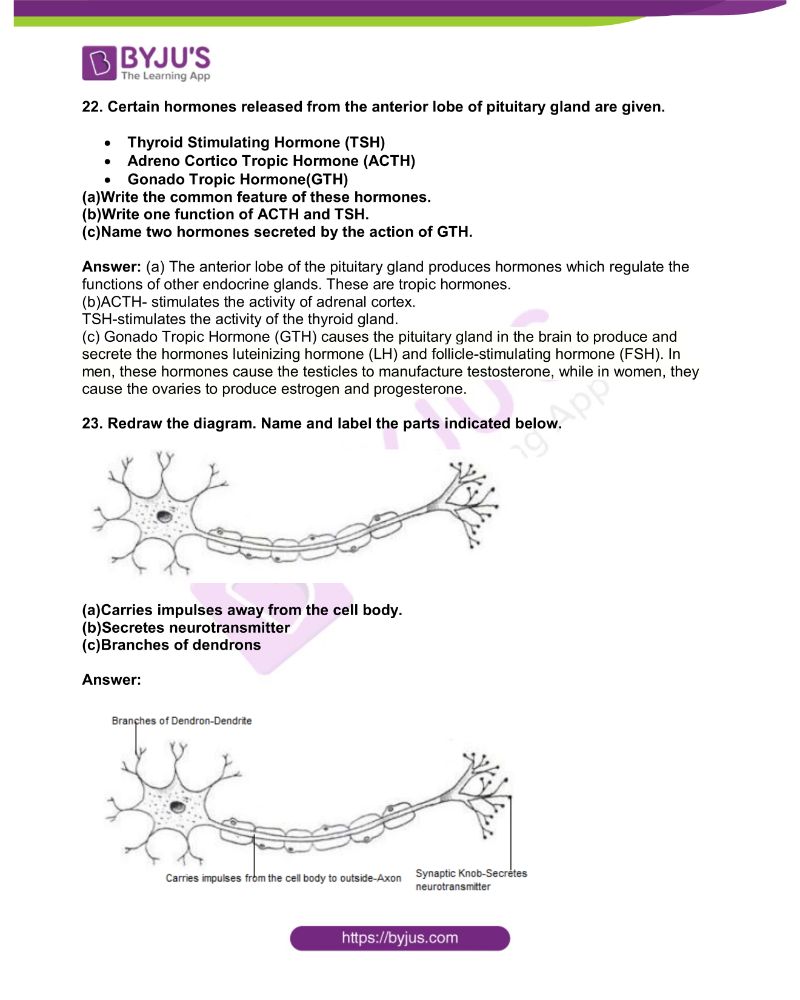 Answer any 5 questions from Question no 1 to 6. Each Question Carries 1 Mark.

What does the number “44” indicate in this “illustration?”

Answer: The number “44” denotes the number of autosomes in an individual.

2. Find out the correct pair of the following:

3. Identify the word pair relation and fill the blanks:

(a) Arrangement of nucleotides: DNA profiling

4. Which one of the following gases was not present in the atmosphere of primitive earth?

The primitive earth had an atmosphere that was highly reduced thus holding a very limited amount of oxygen. This resulted in an atmosphere filled with noxious methane, carbon monoxide, hydrogen sulfide, and ammonia.

5. Choose the names of the pheromones from the terms given in the box:

Gibberellin is a plant hormone

Cortisol is a steroid hormone

6. Fill in the blanks in the statement.

“Three types of cone cells are present in the human eye. This is due to the change in _____ in the Opsin molecule”.

There are three types of cone cells in our eyes, which help us to detect three primary colours of light – red, green and blue. This diversity is due to the difference in amino acids in the opsin molecule. So, cone cells provide us with colour vision.

Answer any 6 questions from Question no 7 to 13. Each Question Carries 2 Marks.

7. (a) Identify the picture given.

Answer: The image is of Nucleotide

A nucleotide contains a sugar molecule, a phosphate molecule and a nitrogen base

8. “Mucus and Cilia in the respiratory tract provide a first-level defence.”

(a) What is the role of mucus and cilia in defence?

(b)Write an example of second-level defence.

Answer: (a) The mucous membrane is another protective covering of body parts. Pathogens trapped in the mucus produced by this membrane, get destroyed. The destroyed germs are expelled out by the cilia cells of the mucous membrane.

(b)  Bacteria that penetrate the mucous layer are dealt with the second line of defence. This includes Antimicrobial peptides (AMPs), also called host defence peptides (HDPs), a part of the innate immune response secreted by the surface epithelium of the respiratory tract that kills many strains of bacteria. Bacteria that are resistant to antimicrobial peptides are also killed by a variety of reactive oxygen species produced by phagocytes.

9. List out four concepts that can be included in the pamphlet to be distributed in an awareness programme against Dengue.

Use mosquito repellents and nets

Avoid situations that lead to the multiplication of pathogens and vectors. Keep our surroundings clean.

10. (a) Identify the disease from the following symptoms.

(b) Write the cause of this disease.

Symptoms of Epilepsy are continuous muscular contraction, frothy discharge from the mouth, clenching of the teeth following which the patient falls unconscious.

(b) The main cause of this disease is the continuous and irregular flow of electric charges in the brain.

11. “Though antibiotics are effective medicines, their regular use develops immunity in pathogens against antibiotics.”

Write any two other side effects of the regular use of antibiotics.

Answer: Given here are some other side effects of the regular use of antibiotics:

12. “The basis of genetic engineering is the discovery of the fact that genes can be cut and joined with the help of enzymes.”

(a) Name the enzyme used for cutting genes.

(b)Name the enzyme used for joining the genes.

13. (a) Select the statements related to the disease Haemophilia from the following:

(b) Name the disease to which other statements are related.

(b) The disease to which other statements are related is Sickle cell anaemia.

Answer any 5 questions from Question no 14 to 20. Each Question Carries 3 Marks.

14. (a) Identify the below given diagram.

Answer: (a) The diagram shows the cross-section of the spinal cord.

(b) The name of the parts labelled A, B, C and D are as follows:

15. Match the plant hormones and their functions suitably.

16. The main concepts of the two theories regarding the origin of life on earth are given. Arrange them in the following table. Write the name of the theories as a title.

(i) Life has originated in some other planet in the universe.

(ii)Changes occurred in the chemical substances in water, under specific conditions of the earth.

(iv) Life originated in the ocean.

17. Complete the illustration of hybridisation experiment conducted by Mendel in Pea Plants. 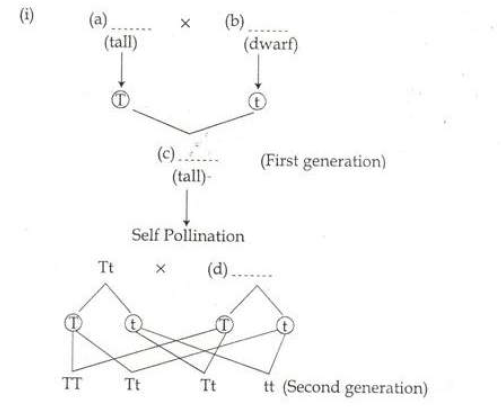 (ii)Which are the characters expressed in the second generation?

18. How do the following substances protect the plants from diseases?

Answer: (a) Lignin- Provides rigidity to the cell walls.

(c)Cuticle- a water permeability barrier serving as a defence mechanism against the entry of microbes. It prevents the entry of germs through leaves.

19. (a) Name the factors that lead to the transformation of normal cells into cancer cells.

(b) Name two methods used in the treatment of cancer.

Answer: (a) The normal cells get transformed into cancerous cells when the control system of cell division fails. This may be due to environmental factors, smoking, radiations, virus, hereditary factors, etc.

(b) Surgery, chemotherapy, radiation therapy etc., are extensively used in the treatment of cancer.

(a) What do A, B and C indicate in the above illustration?

(b) How do conjunctiva and tears protect the eye?

Answer: (a) (i) A- Aqueous humour is the fluid which nourishes the tissues in the eyes.

(ii)B- Vitreous humour 🡪 C- jelly-like substance seen in the vitreous chamber between the retina and the lens.

Answer any 2 questions from Question no 21 to 23. Each Question Carries 4 Marks.

21. Arrange columns B and C according to the items in column A.

22. Certain hormones released from the anterior lobe of the pituitary gland are given.

(a)Write the common feature of these hormones.

(b)Write one function of ACTH and TSH.

(c)Name two hormones secreted by the action of GTH.

Answer: (a) The anterior lobe of the pituitary gland produces hormones which regulate the functions of other endocrine glands. These are tropic hormones.

(b)ACTH- stimulates the activity of the adrenal cortex.

TSH-stimulates the activity of the thyroid gland.

(c) Gonado Tropic Hormone (GTH) causes the pituitary gland in the brain to produce and secrete the hormones luteinizing hormone (LH) and follicle-stimulating hormone (FSH). In men, these hormones cause the testicles to manufacture testosterone, while in women, they cause the ovaries to produce estrogen and progesterone.

23. Redraw the diagram. Name and label the parts indicated below.

(a)Carries impulses away from the cell body.