Kerala Board SSLC Class 10 Biology 2020 Question Paper with solutions is a useful resource for the students to ace the final exams. This study material helps students to perform well and score high marks for the board exams. This Class 10 exam question paper sets the basis for most of the questions that are likely to be asked in the Biology exam paper. Students can now access the PDF formats of the solved or unsolved question paper, according to their preference by only clicking on the links listed in this article. For the convenience of the students, we have provided the clickable links below. Additionally, we also provide the questions and answers on the web-page.

In the meantime, all the students who have mastered the complete complex topics from Biology will find it easier to ace the final exams. Students will also find it easy to understand the type of questions asked in the KBPE SSLC Class 10 Biology exam. Additionally, they can solve the previous papers of Kerala Board Class 10 Biology. After solving the papers, students can refer to these solutions and self-analyse their performance and scale their preparation level for the board exams. It will help them to determine where they have gone wrong while answering and how to avoid these types of errors for the final exams. Solving these SSLC previous papers of Kerala Board is the best way to get an overview of the exam paper pattern and the marking scheme. Students can as well determine the difficulty level of the exams with the help of these question paper solutions. 1. The process that leads to the formation of impulses in photoreceptors is:

a. The dissociation of visual pigments in the presence of light

b. Formation of vitamin A in the presence of light

c. The transmission of impulses to cerebrum through the optical nerve

d. The reunion of retinal and opsin

Answer:(a) The dissociation of visual pigments in the presence of light

2. What are indicated by (i) and (ii) in the illustration of a DNA molecule given below?

3. Analyse the given symptoms and identify the disease

Answer: After analysing the given symptoms, we can identify that myxoedema is the disease.

4. Based on the given model, make a suitable pair from the following box:

5. In plants, which is the chemical substance that prevents the germs, that have crossed the cell wall from entering the cell membrane?

6. Select the correct pair from the following options:

7. Suitably arrange the information under the given headings:

8. Analyse the following illustration and answer the questions: a. What proof of evolution does this illustration give?
b. Does the study of homologous organs give similar proof? How?

Answer: (a) According to the illustration given, it proves that different species that exist today share a common ancestor.

(b) Homologous organs are the organs from various animals that have the same structure but different functions. Now, by studying these organs, it becomes evident that there was a common ancestor for all these living beings. Comparative morphology also indicates proof of evolution.

9. Analyse the following statements related to certain diseases and give the reasons for each.

(a) In hepatitis, dark yellow colour appears in the white portion of the eyes and the nails.

(b) In diphtheria, the ash-coloured thick coating forms in the throat.

Answer: (a) When the flow of bile secreted by the liver is blocked, it gives rise to an increase in the level of the bile pigment, called bilirubin in the blood. This leads to dark yellow colour of the mucus membrane, nails and white portion of the eyes.

(b) Diphtheria is a severe bacterial infection that affects the mucous membranes of the throat and nose producing toxins, which destroy the cells of the mucus membrane. These cells that are destroyed by the toxins produce ash-coloured thick coating in the throat.

10. Observe the picture and answer the following questions: 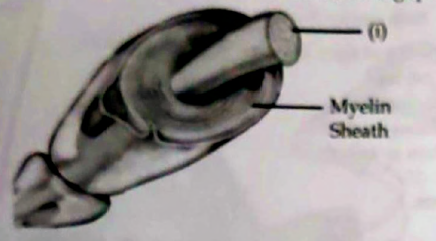 a. Name the part indicated as (i)
b. How does myelin sheath form?

Answer: (a) The part indicated by (i) in the illustration is Axon.

11. Analyse the table related to human chromosomes and arrange the column B in accordance with column A.

12. The functions of the cells in specific defence are illustrated below. Identify (i), (ii), (iii) and (iv) Answer: (i) B- Lymphocytes

(ii) Matures in the Thymus glands

(iv) Disintegrate the cell membrane of bacteria or kill them / stimulate other white blood cells, which will help to destroy the pathogens

13. Analyse the following statement and answer the questions :

“Though haemophilia is not completely curable, temporary relief can bring in.”

(a) How can temporary relief be brought in?

(b) Why is complete cure not possible?

Answer: (a) Temporary relief for haemophilia is to receive replacement of the deficient protein by injecting it

(b) Complete cure for this is not possible, as it is a genetic disease

14. Observe the given steps related to the experience of taste and arrange them properly.

15. Analyse the part of an illustration related to genetic engineering and answer the following questions:

(a) Add further steps and complete the illustration.

(b) Mention any other advantages of genetic engineering.

Answer: (a) Other steps that are added to complete the illustration related to artificially preparing Plasmid includes

(b) Some advantages of genetic engineering are as given below: (b) What may be the characters that will appear in the plants produced as a result of the self-pollination of the first generation?

(b) Meanwhile, the characters that will appear in the plants produced as a result of the self-pollination of the first generation are given below:

17. Write a short note which explains the mode of transmission and precautions of rat fever to include in a pamphlet preparing for an awareness programme.

Answer: Here are some mode of transmission of Rat fever mentioned below to be included in any pamphlet informing of an awareness programme:

Meanwhile, the precautions for rat fever are also given:

18. Analyse the illustration and answer the following questions ?

Answer: (a) In the given figure (i) is Sensory neuron and (ii) is Inter neuron

(b) Not all of our accidental responses are controlled by the spinal cord (iii). When light falls on our eyes or any object moves towards our eye we normally blink our eyes. This response is a cerebral reflex, under the control of the cerebrum.

19. An illustration related to human evolution is given. Analyse it and answer the following questions: 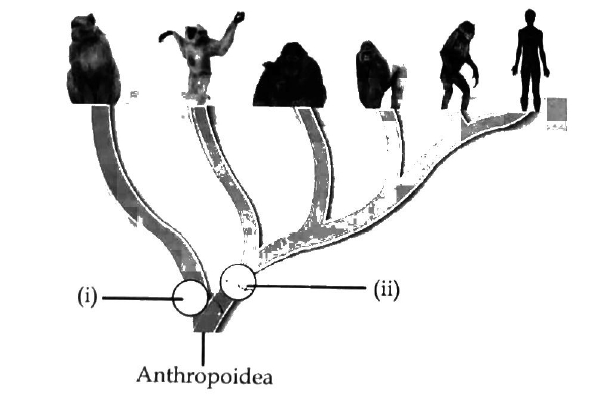 Answer: (a) Category (i) from the image is Cercopithecoidea and (ii) is Hominoidea

(c) A comparative study of haemoglobin explains how an ancestral single-function molecule gave rise to descending molecules with varied functions. Haemoglobin is the molecule in red blood cells responsible for giving blood its colour and for carrying oxygen throughout the body. New functions of metallo-porphyrin rings or a kind of molecular cage embedded in proteins were developed with the appearance of atmospheric oxygen. The presence of haemoglobin in both oxygen-needing and non-oxygen needing organisms also suggests the same evolutionary roots. Meanwhile, you can see that there is no difference in the number of amino acids in the chain of haemoglobin found in the man or chimpanzee.

20. Select the suitable items from the box and complete the table related to the hormone defects.

(ii) Presence of glucose in urine

21. Identify the gland indicated in the picture and answer the following questions: 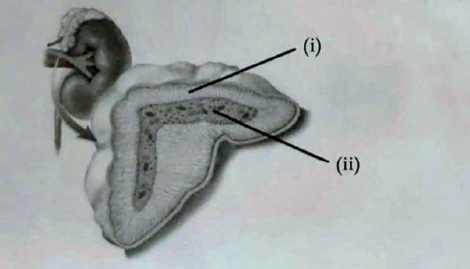 (a) Name the hormone produced by the part indicated as (i), which slows down the action of defense cells.

(b) Name the two hormones produced by the part indicated as (ii). Give their functions.

Answer: (a) The hormone produced by the part (i) Cortex is Cortisole, which slows down the action of defense cells

(b) Part (ii) indicated in the image is the medulla. Meanwhile, two non-steroid hormones produced by the adrenal gland are adrenaline (also called epinephrine) and noradrenaline (also called norepinephrine). Meanwhile, Adrenaline is often called the “stress hormone” as it is a major hormone secreted in response to stress. At the same time, the hormones – adrenaline and noradrenaline also serve as excitatory neurotransmitters in the sympathetic nervous system.

(c) In the meantime, the two primary and linked functions of aldosterone are given here:

22. Explain how the body will react to the situations described below :

(b) The components of vaccines enter the body

Answer: a) The defense activity of the recipient is stimulated when a foreign antigen reaches their blood. Then, the antigen in the blood will react with the antibody in the recipient’s blood, thus resulting in clotting of the blood. Thus, we can conclude that a person cannot receive all types of blood. They can only receive the blood that matches correctly.

(c) Alternatively, when the components of vaccines enter the body, then it will act as the antigens that stimulate the defense mechanism of the body. Antibodies are also formed in the body against them, which are retained in the body. Later these antibodies protect the body from the pathogen that is responsible for the particular disease.

23. Redraw the picture given below. Identify the name indicated and label the parts. (a) The part refracts light rays into the eye.

(b) The part that adjusts its size as the intensity of light varies.

(c) The part of Retina where plenty of photo receptors are seen.