Kerala Board SSLC Class 10 Physics 2020 Question Paper solutions are used by the students to prepare most competently for the final exams. This useful study material helps them to perform well and ace the board exams. This Class 10 exam question paper lays the foundation for most of the questions that are likely to be repeated in the Physics paper for the board exams. Students can now get the PDF formats of the solved or unsolved question paper, as per their preference by just clicking on the links mentioned in this article. Now, for the convenience of the students, we have also provided the clickable links below, in this article. Alternatively, we also provide the questions and answers on the web-page.

All the students, who have mastered the entire complex concepts and formulas from Physics, will find it easier to perform well in the final exams. They will also find it easy to understand the type of questions asked in the KBPE SSLC Class 10 Physics exam. Additionally, they are urged to solve the previous papers of Kerala Board Class 10 Physics. After solving the papers, students can refer to the solutions so that they can self-analyse their performance and thus, scale their preparation level for the board exams. Doing so will also help them to determine where they have made mistakes while answering the questions. Knowing the mistakes beforehand will help them to avoid these types of errors for the final exams. Solving these SSLC previous year papers is also the best way to get an overview of the exam paper pattern and the marking scheme. 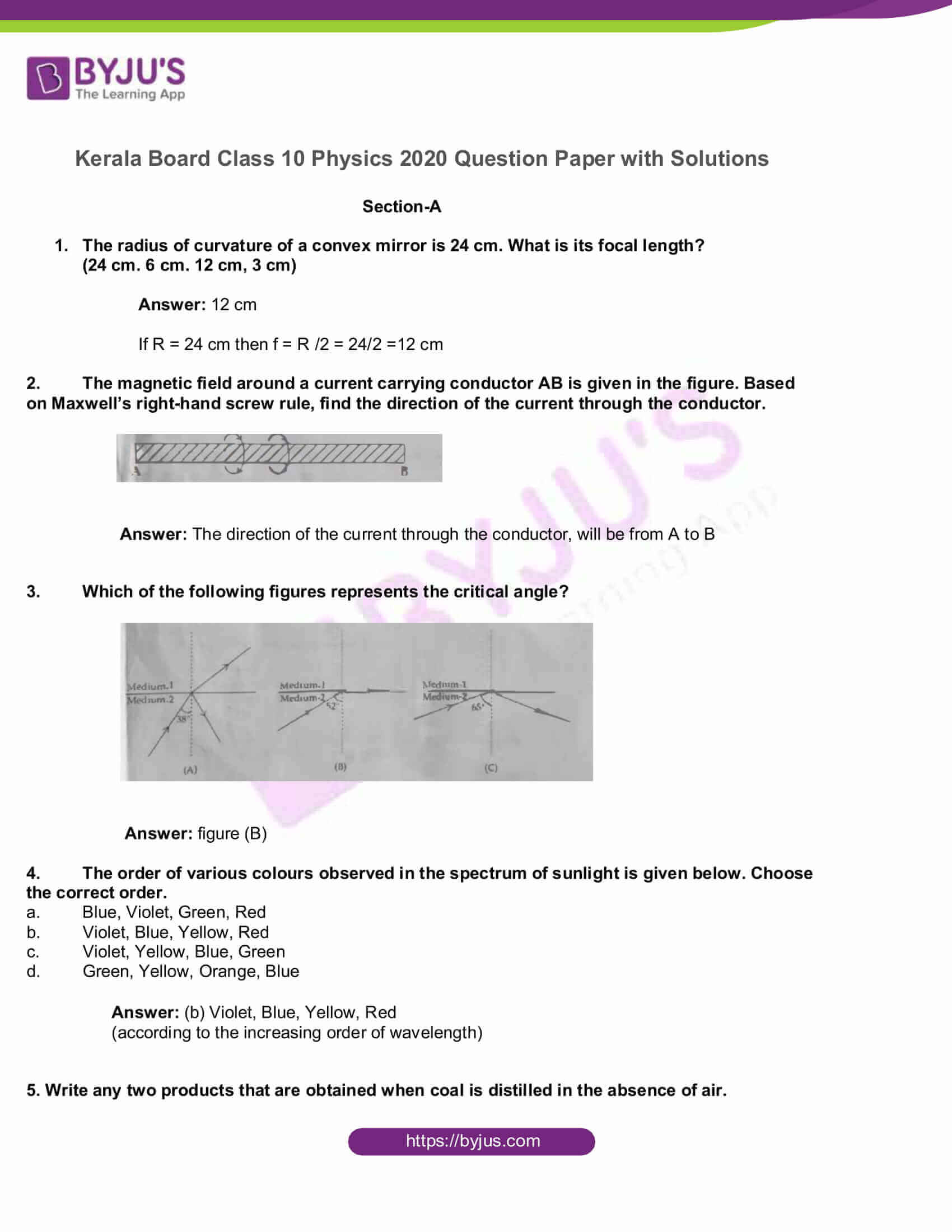 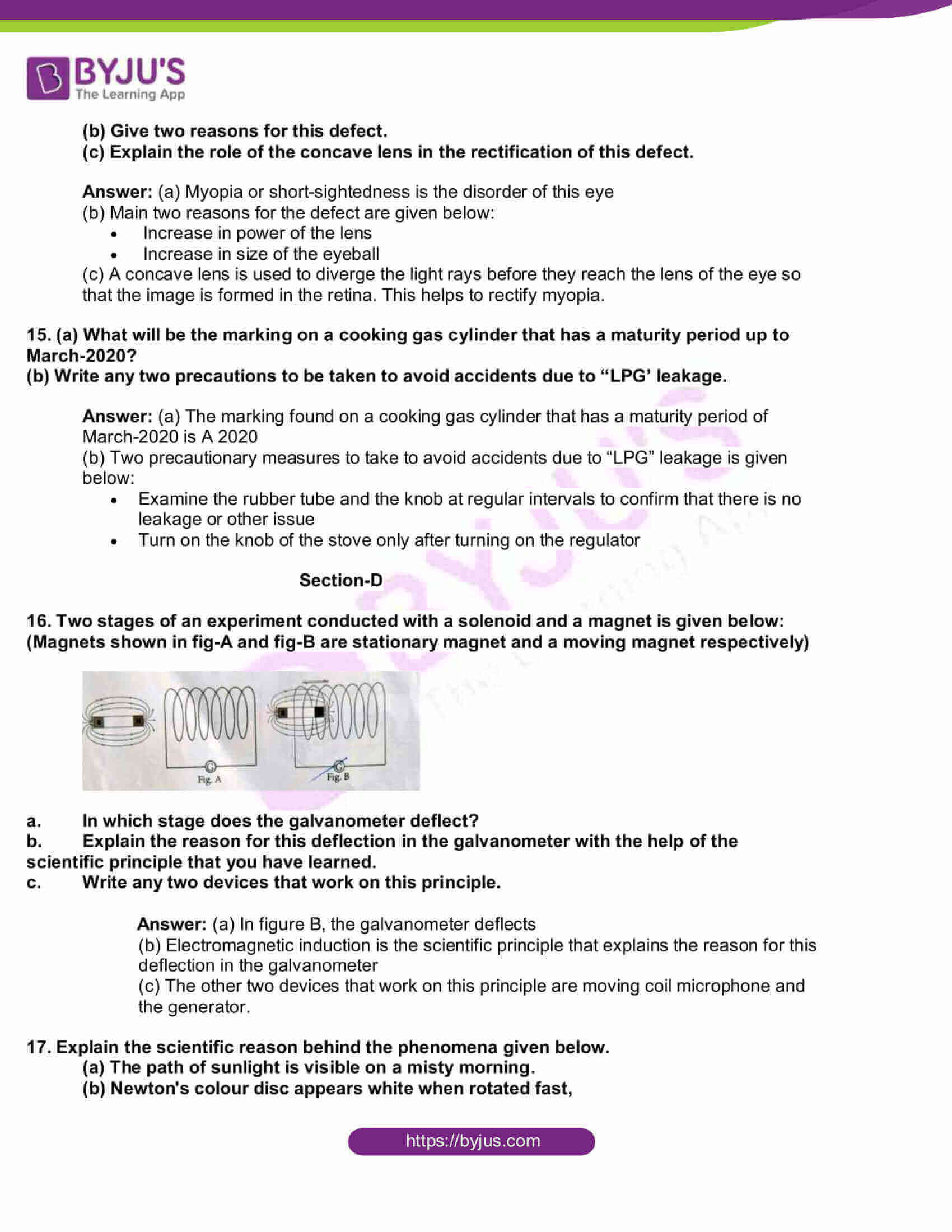 Answer: The direction of the current through the conductor, will be from A to B

(according to the increasing order of wavelength)

5. Write any two products that are obtained when coal is distilled in the absence of air.

Answer: Some products that are obtained when coal is distilled in the absence of air, include coal gas, coal tar, coke, ammonia and so on.

6. The following table is prepared for comparing the properties of resistances in different combinations. Re-arrange the contents in each column to match them correctly.

7. Write any two methods to provide first aid in the case of electric shock.

Answer: Given are some methods to provide first aid in the case of electric shock:

8. A conductor AB is placed in a magnetic field as shown in the figure. (b) If an electric current passes from A to B, then the conductor will move outwards the magnet.

9. Observe the figure of a DC motor. 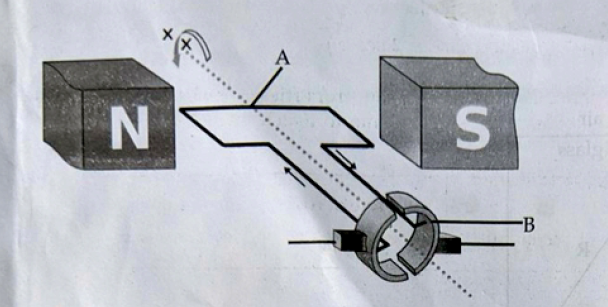 Answer: (a) The part A is the Armature and part B is the Split ring

(b) To change the device to an AC generator, it will have to use Slip rings and the field magnets

10. Write the reason for the twinkling of stars in the Sky.

Answer: When a ray of light travels from one medium to another, it ‘bends’ and this phenomenon is referred to as refraction. If it travels from a rare medium to a dense medium, it bends towards the normal and if it travels from a dense medium to a rarer medium, it bends away from the normal. The speed through which it travels changes depending on the medium, and therefore this bending occurs. This effect can be observed when light passes through a prism or a glass slab and even when light passes through water. The light ray travels from air to a medium of different density here. So how are refraction and twinkling connected? The atmosphere of the earth is made of different layers. It is affected by winds, varying temperatures, and different densities as well. When light from a distant source (a star) passes through our turbulent (moving air) atmosphere, it undergoes refraction many times. When we finally perceive this light from a star, it appears to be twinkling! This is because some light rays reach us directly and some bends away from and toward us. It happens so fast that it gives a twinkling effect.

Learn more about why do stars twinkle from here.

11. Specification of two electrical heaters are given below:

Answer: (a) Heater B requires a fuse of higher amperage

(b) Heater B generates more heat when it operates for 5 minutes under the same voltage rating as the heater A because when the resistance decreases, the current increases, and so does the heat.

12. Two rays of light OA and OB coming from an object “O”, are falling obliquely on the surface of a plane mirror as shown. (b) The image formed is virtual, erect and same size as the object

13. A ray of light falling obliquely from air to a glass slab is shown in the figure. (b) Here the refractive index and the optical density of glass is more than that of air. Also, the ray of light bends towards the normal, when light travels to denser medium. So, the angle of refraction is less than that of the angle of incidence in this case.

14. The picture represents a method of rectification of the defect of an eye using a lens of suitable focal length.

(a) Name the disorder of this eye.

(b) Give two reasons for this defect.

(c) Explain the role of the concave lens in the rectification of this defect.

Answer: (a) Myopia or short-sightedness is the disorder of this eye

(b) Main two reasons for the defect are given below:

(c) A concave lens is used to diverge the light rays before they reach the lens of the eye so that the image is formed in the retina. This helps to rectify myopia.

15. (a) What will be the marking on a cooking gas cylinder that has a maturity period up to March-2020?

(b) Write any two precautions to be taken to avoid accidents due to “LPG’ leakage.

Answer: (a) The marking found on a cooking gas cylinder that has a maturity period of March-2020 is A 2020

(b) Two precautionary measures to take to avoid accidents due to “LPG” leakage is given below:

16. Two stages of an experiment conducted with a solenoid and a magnet is given below:

Answer: (a) In figure B, the galvanometer deflects

(c) The other two devices that work on this principle are moving coil microphone and the generator.

17. Explain the scientific reason behind the phenomena given below.

(a) The path of sunlight is visible on a misty morning.

(d) A person can see the distant object and near object clearly.

Answer: (a) The scientific reason for the path of sunlight being visible on a misty morning is the Tyndall effect.

18. Analyse the circuits A and B

Now, H = v2 t / R, so if the resistance decreases, the heat will increase.

19. Observe the figure and answer the following questions. B1 and B2 are identical bulbs. (a) Which bulb will glow in the circuits?

(b) If the battery in the circuit is replaced by an AC source of the same voltage, what change can be observed in the working of the bulbs? Explain the reasons for the change.

Answer: (a) Bulb B1 will glow in the circuits

(b) The two bulbs [B1 and B2] glow due to mutual induction. While B2 glows continuously, the intensity of bulb B1 was reduced due to self-induction.

(b) Centre of curvature.

Answer: (a) The centre point of a lens is called the optic centre of a lens.

(c) Principal focus of a convex lens is a point on its principal axis to which light rays parallel to the principal axis converge after refraction by the lens.

(d) The difference between the optical centre of the lens and the principal focus is the Focal length of a concave lens.