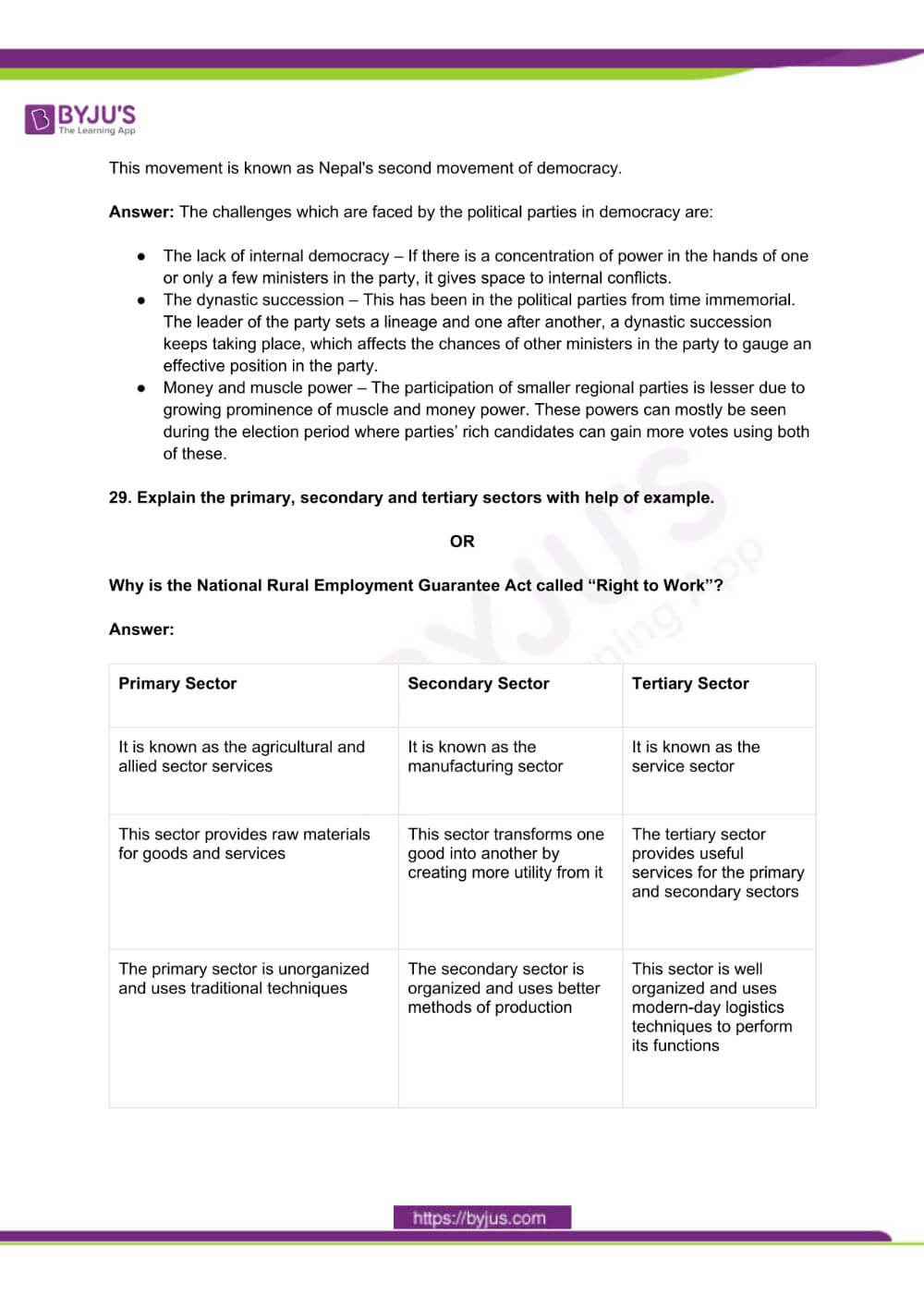 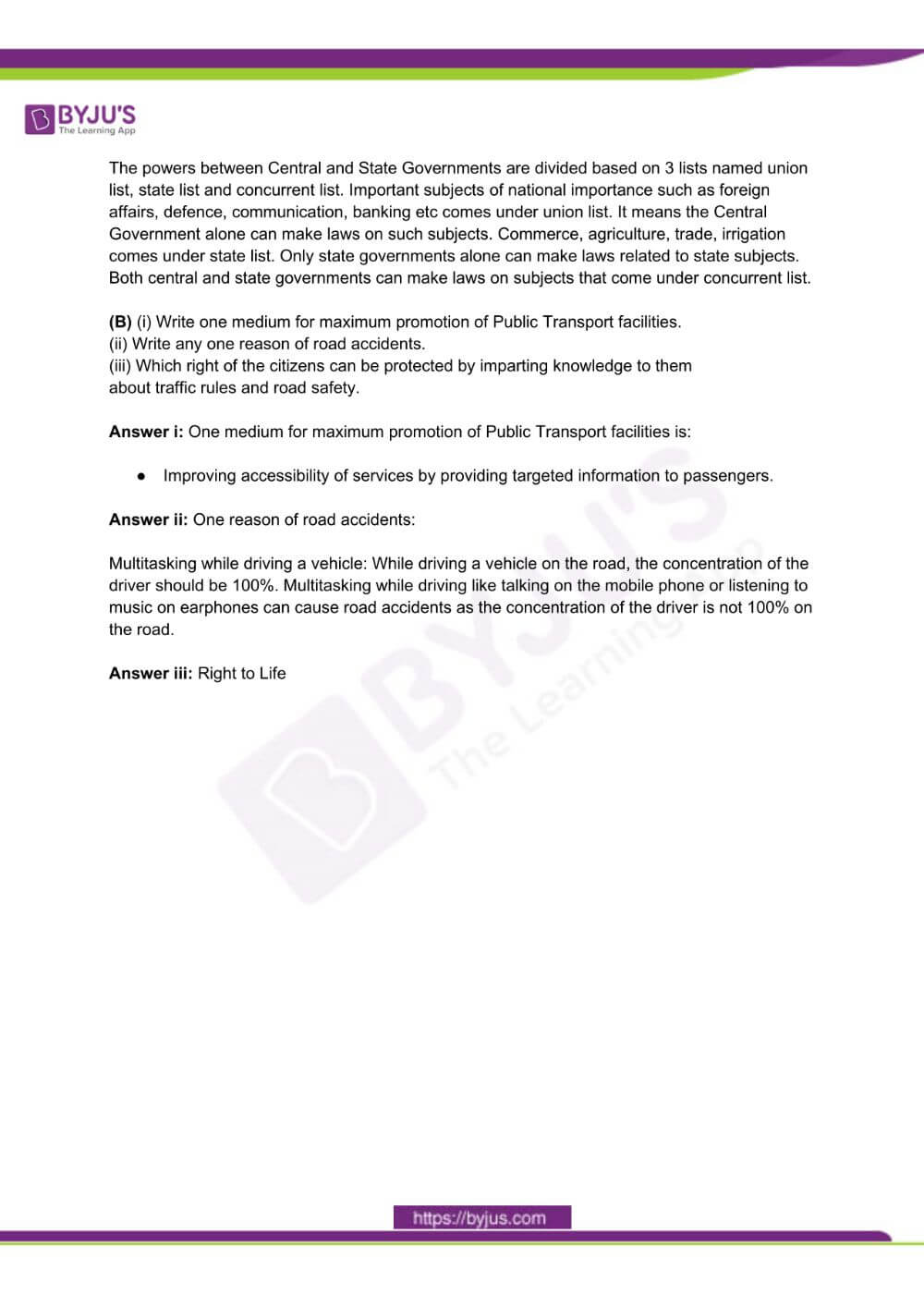 3. What is suitable measure for comparison of development between two or more countries?

Answer: The most basic comparison of development between two or more countries is between GDP per capita levels.

4. What is medium of exchange?

5. Write the meaning of investment.

Answer: Investment refers to the expenditure incurred by producers on the purchase of capital goods such as machinery, plant, etc.

7. Write a short note on the Jallianwala Bagh massacre.

Answer: In Jallianwala Bagh, which is a public garden enclosed from all sides except its narrow entrance, a group of Indians had gathered to protest peacefully against the Rowlatt Act and the arrest of their two leaders. They were unarmed and the crowd consisted of women and children too. On April 13, 1919, Brigadier General Reginald Dyer carried out one of the deadliest attacks in the history of India. Dyer’s troops closed the main entrance to the garden. Without warning, he ordered his troops to fire at the crowd of 15,000 to 20,000 people. Shooting continued for ten minutes until the ammunition was nearly exhausted. Official figures of the massacre reveal that only 379 people died, however, the Indian National Congress had then pegged the figure at least 1,000 people killed and 500 injured.

8. What are Rare Species?

Answer: A rare species is a group of organisms that are very uncommon, scarce, or infrequently encountered. This designation may be applied to either a plant or animal, and is distinct from the term endangered or threatened.

9. Write any four causes of declining biodiversity in India.

Answer: Four causes of declining biodiversity in India are:

11. Explain impact of Globalization on agriculture.

Answer: Impact of Globalization on agriculture are:

14. What is the difference between International and local trade?

Answer: Difference between International and local trade are:

15. Describe the technological changes in World Economy in 19th Century.

Answer: In the early nineteenth century, factories increasingly became an

intimate part of the English landscape. In the 1st phase of industrialisation, cotton was the leading sector. Later steel and iron industry led the way towards industrialisation. Due to higher demand for iron and steel, railways started expanding. Technological changes occurred gradually. The machines often broke down and the cost incurred to repair them was not cheap. When steam engines were invented, it was not accepted quickly. Although it improved productivity, industrialists were slow to accept them.

16. Explain the importance of Advertisement in goods market.

Answer: Advertising plays a very important role in today’s age of competition. Advertising is one thing which has become a necessity for everybody in today’s day-to-day life, be it the producer, the traders, or the customer.

17. Describe the Housing problem of Bombay in the mid-nineteenth century.

Answer: The city of Bombay quickly developed and its trade in cotton and opium developed. People from all over India migrated here in search of livelihood. But the life of migrants was not smooth. The three major problems faced by people who migrated to Bombay during the mid – 19th century are:

18. Write a note on Vienna congress.

Describe the Resistance to France colonial education in schools in Vietnam.

Answer: The Congress of Vienna was a meeting of ambassadors of European states chaired by Austrian statesman Klemens von Metternich. It was held in Vienna from November 1814 to June 1815, though the delegates had arrived and were already negotiating by late September 1814. The objective of the Congress was to provide a long-term peace plan for Europe by settling critical issues arising from the French Revolutionary Wars and the Napoleonic Wars. The goal was not simply to restore old boundaries but to resize the main powers, so they could balance each other and remain at peace. The leaders were conservatives with little use for republicanism or revolution, both of which threatened to upset the status quo in Europe. France lost all its recent conquests while Prussia, Austria and Russia made major territorial gains. Prussia added smaller German states in the west, Swedish Pomerania and 60% of the Kingdom of Saxony; Austria gained Venice and much of northern Italy. Russia gained parts of Poland. The new Kingdom of the Netherlands had been created just months before, and included formerly Austrian territory that in 1830 became Belgium.

Answer: School textbooks disparaged the Vietnamese and glorified the French. It also provided justifications of French colonial rule. The textbooks portrayed that Vietnamese were primitive and lacked intelligence. However, the teachers did not follow the syllabus, they were taught what was happening on the ground. This resistance to follow and teach the school syllabus grew stronger when the number of Vietnamese teachers increased in the lower classes. Gradually with the forming of various groups by the students, schools became a vital spot of political battles.

19. “According to your view democracy is accountable, responsive and legitimate

government.” Give three arguments in favour of your view.

Answer: The most basic outcome of democracy should be that it produces a government that is

accountable to the citizens, and responsive to the needs and expectations of the citizens.

20. Which desirable reforms can be done in the present context in Indian democracy?

22. Give any two differences between formal and informal sector credit.

Answer: Two differences between formal and informal sector credit are:

Cheaper Labour – One of the advantages of multinational corporations is the opportunity to operate in countries where labour is not as expensive. Multinationals can set up their offices in several countries where demand for their services and products are high while cheaper labour is available.

Job Creation – When international companies set up branches in other countries, employees and members of the team are locals. That said, more people are given employment opportunities especially in developing countries.

24. Explain the Judicial machinery for redressal of consumer disputes.

Answer: The law has enabled consumers the right to represent in the consumer courts.

25. Discuss the Religious effects of the Print Revolution.

The novel is a modern form of literature. Explain it.

Answer: The religious effects of the Print Revolution are:

Answer: Nineteenth-century periodicals serialised important novels, which gave birth to a particular way of writing novels. In the 1920s in England, popular works were sold in cheap series, called the Shilling Series. Since social reforms and novels had already created a great interest in women’s lives and emotions, there was also an interest in what women would have to say about their own lives. From the 1860s, a few Bengali women like Kailashbashini Debi wrote books highlighting the experiences of women. A woman in a Tamil novel expressed what reading meant to women who were so greatly confined by social regulations.

26. What are resources ? Describe biotic and abiotic resources.

Write causes and methods of conservation of soil erosion.

Answer: Resources is a vast concept. Resources are everything that is useful and contributes value to society. A resource is a water, air, food, animals, plants, metals, minerals, and anything else that exists in nature and also has usefulness to human civilization.

Answer: The causes of soil erosion are:

The raindrops disperse the soil, which is then washed away into the nearby streams and rivers. Regions with very heavy and frequent rainfall face a large amount of soil loss. The flowing water during floods also erodes a lot of soil by creating potholes, rock-cut basins, etc.

2. Agriculture – The farming practices are the major cause of soil erosion. The agricultural activities disturb the ground. The trees are cleared and the land is ploughed to sow new seeds. Since most of the crops are grown during spring, the land lies fallow during winters. Most of the soil is eroded during winters.

Also, the tyres of tractors make grooves on the land, making a natural pathway for water. Fine soil particles are eroded by wind.

3. Grazing – The grazing animals feed on the grasses and remove the vegetation from the land. Their hooves churn up the soil. They also pull out plants by their roots. This loosens the soil and makes it more prone to erosion.

4. Logging and Mining – A large number of trees are cut down to carry out the logging process. Trees hold the soil firmly. The canopy of the trees protects the soil from heavy rainfall. The leaf litter that protects the soil from erosion, is also lost during logging. Mining activities also disturb the land and leave the soil more prone to erosion.

6. Rivers and Streams – The flowing rivers and streams carry away the soil particles leading to a V-shaped erosion activity.

7. Heavy Winds – During dry weather or in the semi-arid regions, the minute soil particles are carried away by the wind to faraway lands. This degrades the soil and results in desertification.

Methods of conservation of soil erosion.

“Even today, women face many discriminations.” Explain the statement with examples.

Explain the challenges which are faced by the political parties in democracy.

Answer: In April 2006, Nepal witnessed an extraordinary movement to restore democracy. The features of this movement were as follows.

1) The movement aimed to reverse King Gyanendra’s orders of dismissing the Parliament and restore democracy in Nepal.

2) All the major political parties in the Parliament came together and formed an alliance called the Seven Party Alliance (SPA), which announced a four-day strike in Kathmandu.

3) They were joined by Maoist insurgents and various other organisations, as their protest developed into an indefinite strike. Millions of people resisted curfew and gathered on the streets every day demanding the restoration of democracy. Ultimately, the King was forced to concede all the demands of the people, i.e. restoration of democracy, power to an all party government and the formation of a new constituent assembly in the country.

This movement is known as Nepal’s second movement of democracy.

Answer: The challenges which are faced by the political parties in democracy are:

29. Explain the primary, secondary and tertiary sectors with help of example.

Why is the National Rural Employment Guarantee Act called “Right to Work”?

Answer: National Rural Employment Guarantee Act called “Right to Work” because it provided 100 days work and wage to every person below poverty line.

Objectives of NREGA are:-

30. (A) Mark the following in the given outline Map of India :

(B) Mark the following in the given outline map of India.

Answer A and B: Activity to be done by yourself.

31. (A) “The Constitution of India clearly provided a three-fold distribution of legislative

powers between the Union and States. ” Explain the statement with examples.

Answer: Power is shared among different organs of government, such as the legislature, executive and judiciary. Such a separation ensures that none of the organs can exercise unlimited power.

The powers between Central and State Governments are divided based on 3 lists named union list, state list and concurrent list. Important subjects of national importance such as foreign affairs, defence, communication, banking etc comes under union list. It means the Central Government alone can make laws on such subjects. Commerce, agriculture, trade, irrigation comes under state list. Only state governments alone can make laws related to state subjects. Both central and state governments can make laws on subjects that come under concurrent list.

(B) (i) Write one medium for maximum promotion of Public Transport facilities.

(ii) Write any one reason of road accidents.

about traffic rules and road safety.

Answer i: One medium for maximum promotion of Public Transport facilities is: