Q.1. Which antibody is involved in hypersensitivity or allergic reaction?

Q.2. Which cell is involved in cell-mediated immunity?

Q.4. Which antibody is transmitted from a mother placenta to embryo?

Q.5. Which of the following is produced in the body by vaccination?

Q.6. Which of the following is a physical barrier?

Q.9. Which of the vaccines are created by the deactivation of pathogens?

Q.10. Which of the following are long-term immunity, which is present since the time of our birth?

Q.1. What are the types of Immunity?

Sol: There are two major types of immunity:

Q.2. Which part of the antigen binds with an antibody?

Sol: Fab- Fragment antigen binding is the part of the antigen that binds with an antibody.

Q.4. How many types of antigen and antibody are found in the human body?

Q.5. What are Antibodies?

Sol: Antibody (Ab) is also known as an immunoglobulin(Ig). These are large, Y-shaped proteins produced by plasma cells and are present in the blood cells. They bind to foreign particles and invade them. These particles are foreign bodies that get attacked by Antibody.

Sol: Immunization is the process of activating the person’s immune system, typically by the administration of a vaccine. This process helps an individual to protect against subsequent infection or dreadful disease.

Sol: Immunity is the ability of the body to defend itself against disease-causing organisms. Everyday our body comes in contact with several pathogens, but only a few result in diseases. The reason is, antibodies are released against these pathogens by our body cells, which has an ability to protect our body against diseases. This defence mechanism is called immunity.

Q.8. What are the main elements of the innate immune system?

Sol: The main elements of the innate immune system are –

Q.9. What are the different types of antibodies?

Antibodies (Ab) are also known as an immunoglobulin(Ig). of five different types. This classification is on the basis of their H chains. The different types of antibodies that are present are as follows:

Q.10. What is the difference between antigen and antibody

Sol: An antigen is a molecule that initiates the production of an antibody and causes an immune response.

Antibody (Ab) is also known as an immunoglobulin(Ig). These are large, Y-shaped blood proteins produced by plasma cells. They bind to foreign particles and invade them. These particles are foreign bodies that get attacked by Antibody.

Differences between antigen and antibody.

Q.11.What are the functions of the antibody?

Sol: The main functions of the antibody are:

Q.12. What is innate immunity?

Sol: The immunity, which is present in an organism by birth is called the innate Immunity. Innate immunity refers to the body’s defence system. This is activated immediately when the pathogen attacks. Innate immunity includes certain barriers and defence mechanisms that keep foreign particles out of the body. This immunity helps us by providing the natural resistance components including salivary enzymes, natural killer cells, intact skin and neutrophils, etc. which produce an initial response against the infections at birth prior to exposure to a pathogen or antigens. It is a long-term immunity in which our body produces the antibodies on its own. Our body has few natural barriers to prevent the entry of pathogens.

Q.13. What are the functions of antibodies in the human immune system?

Sol: Antibodies are the proteins produced due to the interaction of antigens with B cells found in the body and can get specifically coupled with that specific antigen.

Following are some of the primary functions of antibody:

Q.14.What are the different types of antigens?

Sol: There are different types of antigens and the classification are as follows:

Based on their origin or their sources:

Based on the immune response or the ability of antigens to carry out their functions:

Q.15. What is the difference between active immunity and passive immunity

Q.16. Explain in detail about the B-cells and T-cells.

Sol: The acquired immunity involves two types of cells: B-cells and T-cells. B cells and T cells are the white blood cells of the immune system that are responsible for adaptive immune response in an organism. Both the cells are produced or developed within the bone marrow. The B cells mature in the bone marrow and the T cells travel and mature in the thymus. These cells are structurally similar and are involved in adaptive immune response in an organism. 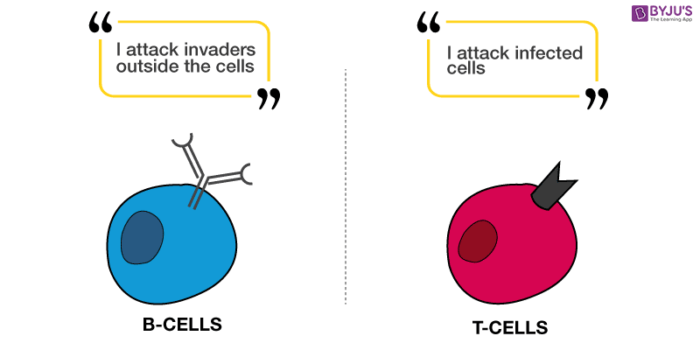 Q.17. What is Acquired Immunity?

An individual acquires the immunity after the birth, hence is called the acquired immunity.

Unlike the innate immunity, this is not present by birth. It is the immunity that our body acquires or gains over time. The ability of the immune system to adapt itself to disease and to generate pathogen-specific immunity is termed as acquired immunity. It is also known as adaptive immunity.

Acquired Immunity is specific and mediated by antibodies or lymphocytes which make the antigen harmless.

The main function of acquired immunity is to relieve the victim of the infectious disease and also prevent its attack in future. It mainly consists of an advanced lymphatic defence system, which functions by recognizing their own body cells and not reacting to them.

Our body starts producing antibodies to engulf the pathogen and destroy its antigen. When it encounters for the first time, it is called a primary response. Once a body gets used to these pathogens, antibodies are ready to attack them for the second time and are known as naturally acquired immunity.

The acquired immunity in our body has certain special features.

Sol: A human body has a few natural barriers to prevent the entry of pathogens.

Q.19. List out the similarities and differences between B-cells and T-cells?

Similarities between B-cells and T-cells:

Differences between B-cells and T-cells:

Q.20. What are the cells involved in the mechanisms of innate immunity?

Sol: There are different types of cells, which play an important role in the mechanisms of innate immunity. These cells include:

We, at BYJU’S, aim to deliver students with all the necessary support and allow them to prove their abilities by excelling in their examination. Important Questions for RBSE Class 12 Biology Chapter-39, Immune system are prepared under the guidance of RBSE syllabus for Class 12 with proper structure and after thorough research on the particular topics.