The solutions for all the questions on Chapter 1 Physics of RBSE Class 12 are provided here. Students can go through these questions to understand the concepts better and score well in the board examination. These solutions are solved by the team of experts to provide the best and accurate solutions to the questions. Visit BYJU’s RBSE Class 12 solutions page to get the answers for textbook questions of all subjects.

Q1: Two identical charges separated by a distance of 3m experience a force of repulsion of 16N, the magnitude of each charge is

Q3: Two-point charges +9e and +e are at a separation of 16m. Where on the line joining them another charge q must be put so it remains in equilibrium?

Q4: Two identical spheres having unequal and opposite charges are 90 cm apart. They are now made constant and then again separated by the same distance. Now they repel each other by a force of 0.025 N. Find the charge on each sphere.

Q5: On putting a glass plate in between the two charges the electrostatic force between them as compared to earlier is

Q7: On placing a dipole in a uniform electric field it is acted upon by a

Q8: For the same distance from the centre of dipole the ratio of electric fields at longitudinal and transverse position is

Q9: The force of attraction between +5 μC and -5 μC charges kept at some distance apart is 9N. When the two charges are made to contact and then separated again by the same distance the force acting between them becomes

Q10: Two equal but unlike charged objects are kept at some distance apart with a force F acting between them. If 75% charge of one of them is somehow transferred to the other then the new force between them is

Q1: Write the value of one quantum of charge.

Q2: The electrostatic force between two protons separated by a distance r is F. If the protons are replaced by electrons then what will be the force?

Answer: The force between the two electrons will also be F

Q3: The force exerted by one charge on another is F. In presence of a third charge what will be the force on the second charge by the first charge.

Answer: The force on the second charge by the first charge will be F even when a third charge is present

Q4: Name the experiment with which the quantum nature of charge was established?

Q5: What is the force acting on a charge placed in an electric field E?

Answer: The force acting on the charge q is given by, F= qE

Q6: What is the effect of speed of a charged particle on its charge and mass?

The magnitude of the electric field is given by

Q8: Give the definition of electric dipole moment.

p = magnitude of the charge

2a = distance between the charges

Q9: Write the condition for an ideal electric dipole

Answer: An ideal dipole is the combination of two opposite charges of the same magnitude having a small distance between them.

Q10: What is the net force on an electric dipole in a uniform electric field?

Answer: Dipole meaning two opposite charges. The force (F) of the positive charge +q is +qE and the force on the negative charge -q is -qE. Therefore the net force on an electric dipole in a uniform electric field is zero.

Q1: What is meant by frictional electricity? Describe its origin.

r =distance between the charges

Q3: Write the law of superposition of forces

Answer: According to the law of superposition of force the net force acting on a charge is equal to the sum of the individual forces.

Q4: What is meant by electric field lines? Write its two properties

Q5: Explain the law of conservation of charge.

Answer: According to the law of conservation of charge, the total charge in a closed system remains constant. The amount of positive charge minus the amount of negative charge in the universe is always conserved.

Q6: Define the relative permittivity of a medium.

Q7: How can a metallic sphere be charged without touching it?

Answer: The induction charging is a charging process in which the object is charged without actually being touched. The charging by induction process is where the charged object is held near an uncharged sphere that is grounded on a neutrally charged material. The charge flows between two objects and the uncharged sphere develops a charge with opposite polarity.

Answer: If q1+q2 is equal to zero it means that the total force acting on the system is also zero.

Answer: The quantisation of electric charge means that the total charge of the system is an integral multiple of individual charge (e).

e = charge of an electron

Q10: A dipole is kept in a uniform electric field. Show that it will not have a translatory motion

Q11: Explain why the test charge employed should be infinitesimally small for determining the electric field due to a point charge.

Answer: The basic reason is that the test charge should not disturb the electric field. When the test charge is infinitesimally small then it will not alter the field being measured.

atoms. The nucleus of each atom has a charge 29e. What fraction of electrons should be removed from the sphere to give it a charge of 2μC?

The charge on the nucleus of each atom = 29e

Q13: Consider two identical metallic spheres of exactly the same mass. One of them is given some negative charge and the other is charged positively by the same amount, will there be any difference in the masses of the sphere after charging? If yes, Why?

. Therefore the electric field intensity reduces more rapidly for a dipole along the axial line than for a single charge.

Q1: Define Coulomb’s law for the electrostatic force between two charges, and discuss its limitations. Using this law define 1 coulomb of charge.

Coulomb’s Law or Coulomb’s Inverse Square Law states that the magnetic of the electric force of attraction or repulsion acting between two point charges at rest is directly proportional to the product of the charges and inversely proportional to the square of the distance between them. This force acts along the line joining the two charges and it also depends on the nature of the medium between the charges.

If F is the force between two charges then

r = distance between the two charges

Definition of 1 Coulomb of charge from Coulomb’s Law

If the force acting between the two equal charges kept at a distance of 1m is 9×109 N then the magnitude of each charge is equal to 1 Coulomb.

Expression for electric field due to a point charge

We will consider a charge +q kept in free space at the point O. Let us consider a point P at a distance r from the point charge. In order to calculate the electric intensity at point P we should keep a test charge +q1 at P.

According to Coulomb’s Law, the electrostatic force acting on the charge +q1 is given by

The direction of the electric force is from O to P

Let us divide both sides of the equation by q1

Therefore, the electric intensity at P is given by

If another charge q1 is brought in this field the electric force acting on it is given by Coulomb’s force.

Consider two charges +q and -q kept at the points B and A. The moment of the dipole is given by p = q(2a). Where q is the magnitude of either one of the charges and 2a is the distance between the two charges. Consider a point M on the axial line at a distance r from the centre O of the dipole.

Electric field at M due to the charge +q at B

(in the direction B to M)

(in the direction M to A)

Here i is the unit vector. The net electric field at point M is equal to the sum of E1 and E2.

Since dipole moment p =q(2a), the above equation can be rewritten as

Therefore, the value of the net electric field can be written as

Q4: Derive the expression for the torque acting on a dipole placed in a uniform electric field.

Answer: Torque is the force that causes a dipole to rotate about an axis. It is a vector quantity and its direction depends on the direction of the force applied. Let us consider the charges +q and -q kept at a distance d. The dipole is kept in a uniform electric field of strength E and the dipole makes an angle θ with the electric field. 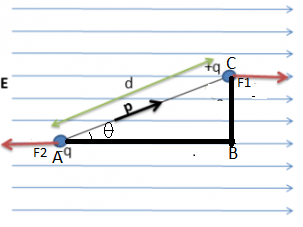 The torque on the dipole is given by

From the figure, we know

The dipole moment p =qd, where q is the charge and d is the distance between the charges. Therefore the equation for torque can be written as

The vector form of the equation of torque is given by