The answers are provided for all the questions of Chapter 16 Physics of RBSE Class 12. Students can go through these questions to understand the concepts better and score well in the board examination and entrance examinations for various professional courses. These solutions are provided by the team of experts to provide the best and accurate solutions to the questions. Do check BYJU’S RBSE Class 12 solutions page to get the answers for textbook questions of all subjects.

Q2: In insulators the forbidden energy gap between the valence band and conduction band is

Q3: If an NPN transistor is used as an amplifier then

Q4: The current amplification factor for a common base circuit of a transistor is 0.95. When emitter current is 1mA then base current is

Q5: The forbidden energy gap in Germanium is 0.7 eV. The wavelength at which its absorption starts is

Q1. What is the direction of diffusion current in junction diode?

Answer: The direction of current is from P region to N region.

Q2: Write down the relation between α and β (current amplification factor) of the transistor.

Answer: The relation between α and β is given by

Q3: Can the barrier potential of the forward-biased PN junction be measured by a voltmeter connected at the ends of the device?

Answer: No, it is not possible to find the barrier potential of the forward-biased PN junction by connecting voltmeter at the ends.

Q4: Make the truth table for the OR gate.

Q5: Write down the name of that logic gate in which the output is 1 when all the inputs are 1

Answer: AND gate gives the output 1 when the input is 1

Q6: To use the transistor as an amplifier which junction is reverse biased?

Answer: To use the transistor as an amplifier Base-collector junction is reverse biased.

Answer: The relation between α and β is given by

Q1: What is rectification? Draw the figure of a bridge full-wave rectifier.

Rectification: It is the process of converting alternating current to direct current. 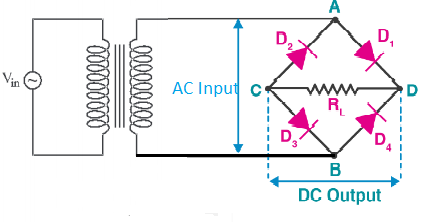 Q2: In a rectifier why is the base made thin in comparison to the emitter and collector? Dynamic resistance of a diode is defined as the ratio of change in voltage to the change in current.

Q4: What do you understand by the logic gate? Draw the symbol for XOR gate and also write the truth table.

Answer: A Logic gate is an elementary building block of a digital circuit. The logic gates have two or more inputs and a single output. It follows a certain logical relationship between the input and the output voltages. The five common logic gates are OR gate, AND gate, NOT gate, NOR gate and NAND gate. Each logic gate has a symbol and its function is defined by the truth table.

Q5: Draw the transistor-based circuit diagram for NOT gate and also give its truth table.

Transistor-based circuit diagram for NOT gate Q6: Write down the boolean expression for the given logic circuit. And also write the truth table for it.

Q7: Draw the circuit used for voltage regulation by Zener diode and also explain the process in short.

Answer: The Zener diode is specially designed to work in reverse biased condition. These diodes have specified breakdown voltage depending on the doping levels. As the voltage across the diode remains constant at the breakdown and there is an increase in current. This property helps Zener diodes to be used in voltage stabilization and voltage regulation. The above figure shows a power supply with output voltage Vi, resistance Rs and Zener diode are connected across the output terminals. The load resistor RL is connected parallel to the Zener diode. The Zener diode selected has a breakdown voltage Vz equal to the constant value of the dc voltage to be obtained at the load resistance RL. The Zener diode is connected in the circuit in reverse biased condition. We do not use ordinary junction diode because the low power rating diode can get damaged when we apply reverse bias above its breakdown voltage. If the value of Vi is greater than VZ then the diode comes in the breakdown region and the potential across its terminals will be VZ. Since RL is parallel to the diode the potential difference across RL is also VZ. Even if the value of RL is changed the potential difference will be VZ. The series resistor Rs is connected to the circuit in order to limit the current into the diode.

Q1: Differentiate between conductors, insulators and semiconductors on the basis of energy band theory. Explain the process of electrical conductance in intrinsic semiconductors. Metals like Gold, Copper, Aluminum, Silver, allow an electric current to flow through them.

The valence band and the conduction band overlap since there is no forbidden gap between them. The number of free electrons available in a conductor at room temperature is large.

The energy band diagram of a semiconductor shows that the conduction band is empty and the valence band is completely filled. The forbidden gap between the two bands is very small, that is about 1eV approximately. For Germanium, the forbidden gap is 0.72eV and for Silicon, it is 1.1eV. Thus, a semiconductor requires small conductivity. Germanium and Silicon are the most preferable materials used as semiconductors.

Electronic Configuration of Silicon and Germanium

We notice from the electron configurations of both the elements that they have four electrons in their outermost shell or valence shell. As the temperature of the semiconductor is increased, the electrons gain more thermal energy and thus break free from their shell. The process of ionization of the atoms in the crystal lattice creates a vacancy in the bond between the atoms. The position from which the electron gets dislodged has a hole which is equivalent to an effective positive charge. The hole is then occupied by a free electron, as a result of which the latter vacant position becomes a hole and the former becomes a neutral position. This way the hole or the effective positive charge is transferred from one position to another. In an intrinsic semiconductor, the number of free electrons is equal to the number of holes. Mathematically,

Q2: What is PN junction? Explain the process occurring during its formation on the junction surface. If this junction is forward biased then explain the effect on the depletion layer.

Also when the electrons diffuse an ionised donor is left behind at the n-side. As this process continues a positively charged layer is developed on the n-side of the junctions. Similarly, an ionized acceptor is formed on the p-side when a hole moves from p-side to n-side. This region of positive charge and negative charge on either side of the junction is termed as the depletion region. Q3: What is a junction transistor? Make the necessary diagram and explain the working of a PNP transistor.

Answer: Junction transistor is a very important device in which there are two p-n junctions. These are of two types NPN and PNP. The middle part (base) is thin and highly doped. The other two parts are emitter and collector. The emitter has higher doping than the collector. 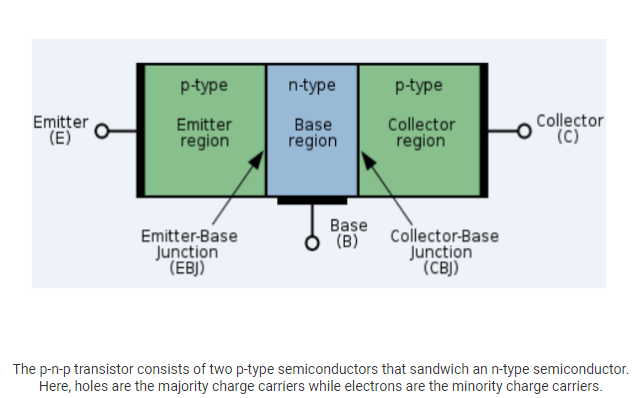 Working of a PNP transistor 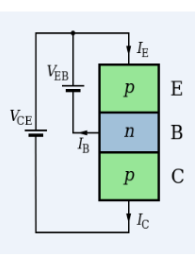 The emitter-base junction is forward biased whereas the collector-base junction is reverse biased. In a PNP transistor, the majority charge carriers are holes which move from the emitter to the base. As the base layer is very thin, only little interaction occurs when electrons and holes combine. Most of the holes reach the collector. The current is carried by holes in a PNP transistor.