Heat is a very curious form of energy. It helps us stay warm, prepare hot and tasty food but its application far exceeds the domestic uses mentioned here. Understanding the properties of heat is the key to many fields of science. Thermodynamics is a massive field that deals only with the flow of heat through a system. Even nuclear energy uses the heat developed by the atom to create electricity. So it is clear that heat is quite important to us. That makes it imperative for us to take a closer look at heat.

Thermal Radiation is the transfer of heat by the means of the electromagnetic radiation generated by the thermal motion of particles in matter. For most bodies on Earth, this electromagnetic radiation lies in the invisible region of the spectrum known as the Infrared region. Everybody with a temperature above absolute zero emits thermal radiation. Thermal radiation is caused by the motion of the particles inside the body, at absolute zero this motion is completely suspended which is why a body at absolute zero emits no radiation and everything above absolute zero does. The particles moving through the body collide with other particles causing the kinetic energy of these particles to change. The difference between the energy state before and after is emitted as radiation heat loss. Thermal Radiation is responsible for the glow of hot objects i.e. iron is termed as being red-hot because at that temperature most of the thermal energy emitted falls in the red band of the spectrum. At an even higher temperature, it starts emitting a different colour.

The colours emitted by metals at different temperatures. 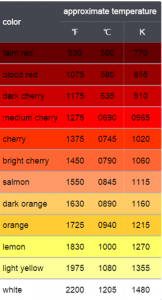 The discovery of heat radiation is a very curious one. It was discovered by the English Astronomer, William Herschel. He noticed that a thermometer, when moved from one end of a prism spectrum to another, would register a temperature change. The highest temperature was observed below the red band of the visible light. Hence, the name Infrared. Infrared waves though, are not to be confused with Heatwaves. Since all forms of electromagnetic radiation transfer energy from place to place, they could all be termed as Heat Waves.

How Is Radiation Different From Other Two Modes?

Unlike Conduction and Convection, Thermal Radiation requires no medium to transfer heat. The heat that the Earth receives from the sun is through Radiation. This is because radiation occurs through electromagnetic waves, and they do not need a medium for transmission. Thermal Radiation has another interesting property. It has been found that darker bodies absorb and emit heat radiation better than bodies with lighter colours. This is why people prefer to wear white colours in summers and darker colours in winters. Black especially is faster at both absorption and emission of heat that White. For humans, the thermal emissivity is independent of the colour of the skin. Skin is a perfect absorber and emitter of Infrared Radiation. If you saw a human through infrared waves, we would all appear black. We lose half our energy through radiation even if the surrounding atmosphere is not much colder than our body.