We quantify the size and shape of things using Dimensional Analysis. It helps us study the nature of objects mathematically. It involves lengths and angles as well as geometrical properties such as flatness and straightness. The basic concept of dimension is that we can add and subtract only those quantities that have the same dimensions. Similarly, two physical quantities are equal if they have the same dimensions.

The study of the relationship between physical quantities with the help of dimensions and units of measurement is termed as dimensional analysis. Dimensional analysis is essential because it keeps the units the same, helping us perform mathematical calculations smoothly.

Dimensional analysis is also called Factor Label Method or Unit Factor Method because we use conversion factors to get the same units. To help you understand the stated better, let’s say you want to know how many meters make 3 km?

Here, the conversion factor is 1000 meters.

Using Dimensional Analysis to Check the Correctness of Physical Equation

Let’s say that you don’t remember whether

We can check this by making sure the dimensions on each side of the equations match.

Reducing both the equations to its fundamental units on each side of the equation, we get

However, it should be kept in mind that dimensional analysis cannot help you determine any dimensionless constants in the equation.

Principle of Homogeneity states that dimensions of each of the terms of a dimensional equation on both sides should be the same. This principle is helpful because it helps us convert the units from one form to another. To better understand the principle, let us consider the following example:

Example 1: Check the correctness of physical equation s = ut + ½ at2. In the equation, s is the displacement, u is the initial velocity, v is the final velocity, a is the acceleration and t is the time in which change occurs.

Hence, by the principle of homogeneity, the given equation is dimensionally correct.

Some limitations of dimensional analysis are:

Check the correctness of the physical equation v2 = u2 + 2as2.

The computations made on the L.H.S and R.H.S are as follows:

Hence, by the principle of homogeneity, the equation is not dimensionally correct.

Evaluate the homogeneity of the equation, when the rate flow of a liquid has a coefficient of viscosity η through a capillary tube of length ‘l’ and radius ‘a’ under pressure head ‘p’ given as \(\frac{dV}{dt}=\frac{\pi p a^4}{8l\eta}\). 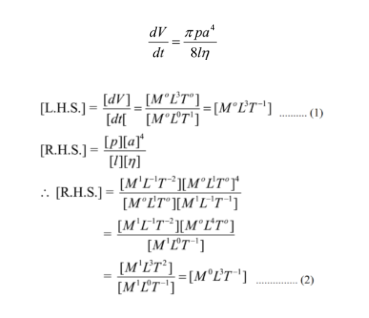 Hence, by the principle of homogeneity, the given equation is homogenous.