Not all the air molecules surrounding us travel at the same speed. Some air molecules travel faster, some move with moderate speeds, and some air molecules will hardly move at all. Hence, instead of asking about the speed of any particular gas molecule, we ask for the distribution of speed in a gas at a certain temperature. James Maxwell and Ludwig Boltzmann came up with a theory to show how the speeds of the molecule are distributed for an ideal gas. The distribution is often represented using the following graph. 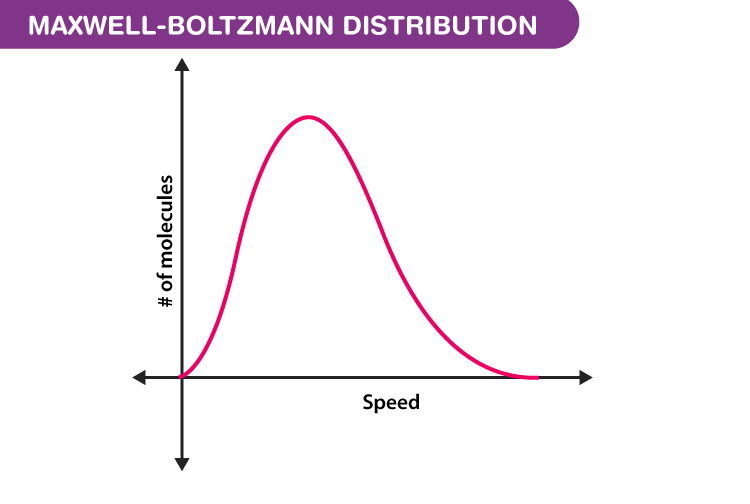 In the next section, let us look at the Maxwell Boltzmann distribution derivation.

Consider a system that consists of identical yet distinguishable particles.

Let the total number of particles in the system be ‘n’.

The total volume of the system is fixed and is given by ‘V’.

The total amount of the energy is fixed and is given by ‘U’.

We, now, want to know the number of particles at a given energy level.

According to Sterling’s approximation, the log of factorial can be approximated as

Making use of the Stirling approximation in eq (3), we get

By taking the derivative of the above equation, we get

The above equation implies that

As we know that n is a constant, therefore we can say that

The sum of all the changes in the system should sum up to zero.

The total energy of the system should also be constant.

Differentiating the above equation, we get

To maximise the function (4) subjected to constraints (5) and (6), let us use the Lagrange’s method of undetermined multipliers.

Simplifying the above equation, we get

The above equation signifies the number of particles in i th level.

In eq (8), the only variable parameter is \(epsilon_i\), therefore taking the sum, we get

The above equation is the same as

The value of 𝛽 in the above equation is \(\beta=-\frac{1}{k_{b}T}\), where kb is the Boltzmann constant and T is the temperature.

The above expression helps find the number of particles in the most probable microstate. This expression is known as the Maxwell Boltzmann statistics expression.