The air might not seem like anything at all; in fact, we look right through it all the time, but during a wind storm, air makes its presence known. The wind is “moving air” that moves due to the differences between air pressure within our atmosphere. The wind is capable of lifting roofs off the building, blow down power lines and uproot trees. Air under high pressure flows toward areas of low pressure. The greater the difference in pressure, the faster the air flows.

The presence of wind is vital to human existence. It carries the monsoon clouds from one place to another, thus causing rains in regions away from water bodies. It helps in the process of pollination and soil erosion. It increases the availability of CO2 to plants for the process of photosynthesis by creating turbulence and increases transpiration. But, sometimes, wind causes severe destruction too. Strong winds cause the uprooting of trees and forest fires. In this section, we will learn about the severe destruction caused by the cyclone and their causes.

Thunderstorms are storms ranging several kilometres in diameter, created by the rapid lifting of moist and warm air, as a result of which a dense vertical tower of the cloud is created. Thunderstorms are associated with strong winds, hail, lightning, tornadoes, thunder and heavy rain. 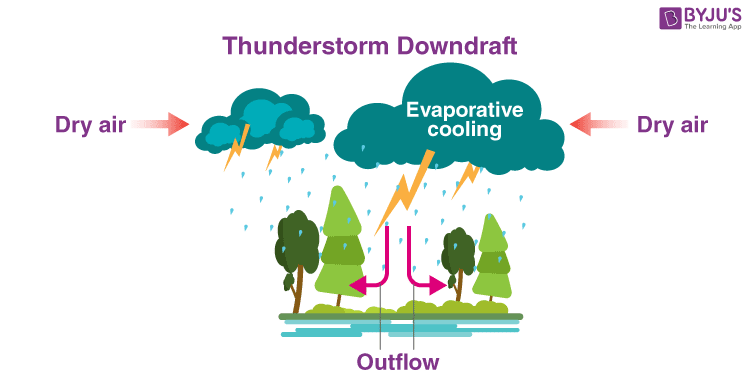 Air carrying water droplets are lifted vertically into the atmosphere due to unequal warming of the surface of the Earth. As a result of this lift, the air condenses and latent heat is released with the expansion resulting from a decrease in pressure (with the increase in height). These condensed droplets freeze and fall back to the ground along with hail, and lightning. 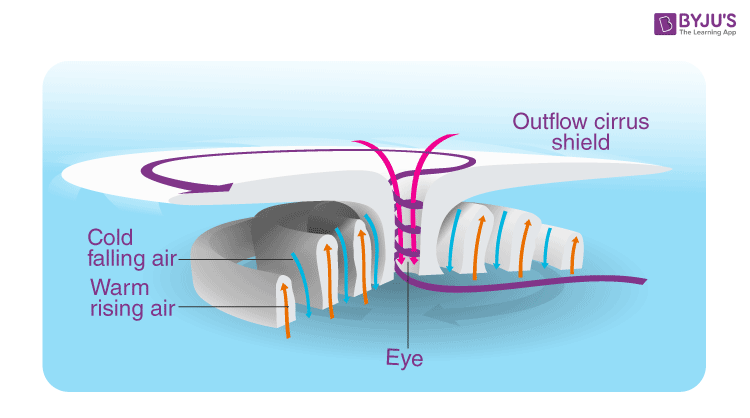 To Know, Why A Cyclone Spin, Watch The Video Below: 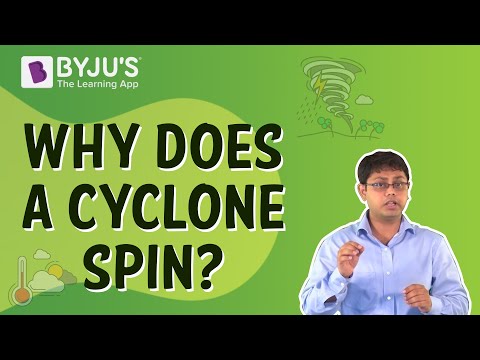 Cyclones are centred on areas of low atmospheric pressure, usually over warm ocean waters near the equator. The warm moist air over the ocean rises from the surface in the upward direction, resulting in the formation of the low-pressure zone over the surface. Air from the surrounding region, with higher pressure, pushes into the low-pressure area. The cool air becomes warm and moist and rises again, thus the cycle continues. As the warm air rises, the moisture in the air cools thus leading to the formation of cloud. The whole system grows gradually and becomes fast with time. As a result of this, an eye is created in the centre, as shown in the figure, which is the low-pressure centre into which the high-pressure air flows from above, thus creating a cyclone.

For more details on the cyclone and its causes and effects download BYJU’S-The Learning App.

Still here? You might want to check out the following links: