Enthalpy is defined as the sum of the internal energy of a system and the product of its pressure and volume. It is denoted by the symbol E. It is a state function. Units used to express enthalpy are calorie, BTU, or joules. It is not possible to measure the total enthalpy of the system directly due to which, change in enthalpy is generally measured during experiments.

E is the enthalpy

U is the internal energy of a system

P is the pressure

What is the Enthalpy change?

An enthalpy change is defined as the difference between the energy gained by the formation of new chemical bonds and the energy used to break bonds in a chemical reaction at constant pressure. In simple terms, it tells about the amount of heat is evolved or absorbed during a reaction. It is denoted as ΔH. It is expressed as follows:

Enthalpy of combustion – It is the change in enthalpy accomplished when one mole of an element is heated in the presence of excess oxygen under standard conditions. It is denoted as ΔHc.

Enthalpy of the solution – It is defined as the total amount of heat released or absorbed when two substances are put in a solution. It can be either negative or positive. For endothermic reactions, enthalpy of solution is positive and for exothermic reactions, it is negative.  It is denoted as ΔHsolution.

Entropy is defined as the measure of the thermal energy of a system per unit temperature which is not available for doing useful work. It is denoted as S. The SI unit for entropy is Joules per Kelvin. Entropy change at constant temperature is calculated as given below:

ΔS represents the change in entropy,

qrev represents the reverse of the heat,

T is the temperature on the Kelvin scale. 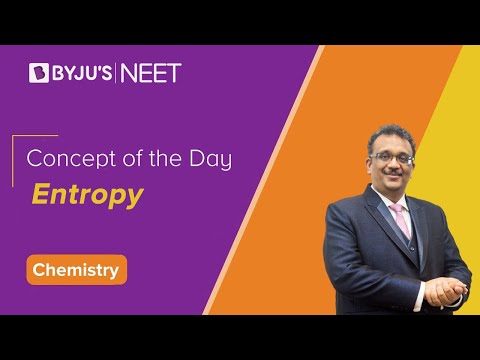 The relationship between enthalpy and entropy:

The relationship between enthalpy and entropy can be seen during the calculation of the Gibbs free energy. Josiah Willard Gibb’s developed Gibbs energy in the 1870s. He termed it as the available energy of a system that can be used to do work. It is defined as the sum of the enthalpy of a system and the product of the entropy and temperature of the system. It is denoted as G.

U is the internal energy in joules

P is the pressure in Pascal

V is the volume in m3

T is the temperature in Kelvin

S is the entropy in joules/Kelvin

H is the enthalpy in joules

The change in Gibbs energy is given as ΔG = ΔH – TΔS

To learn more about enthalpy, entropy and Gibbs free energy from the experts at BYJU’S, register now!

Test your knowledge on Enthalpy And Entropy
Q5