What is the Schiff’s Test?

Schiff’s test is a chemical test used to check for the presence of aldehydes in a given analyte. This is done by reacting the analyte with a small quantity of a Schiff’s reagent (which is the product formed in certain dye formulation reactions such as the reaction between sodium bisulfite and fuchsin). The structure of a decolourized Schiff’s reagent is illustrated below. In this qualitative test for the aldehyde functional group, the development of a purple or magenta colour upon the addition of a few drops of the analyte to the decolourized Schiff’s reagent confirms the presence of aldehydes.

The bisulfite and para-rosaniline react together to afford a decolourised adduct whose central carbon is sulfonated. Now, the free & uncharged amine groups belonging to the aromatic ring that react with the aldehyde group to form an aldimine. This aldimine group is an excellent electrophile and, therefore, undergoes further reaction with the bisulfite ion. Finally, a purple or magenta coloured bisulfite adduct is formed. 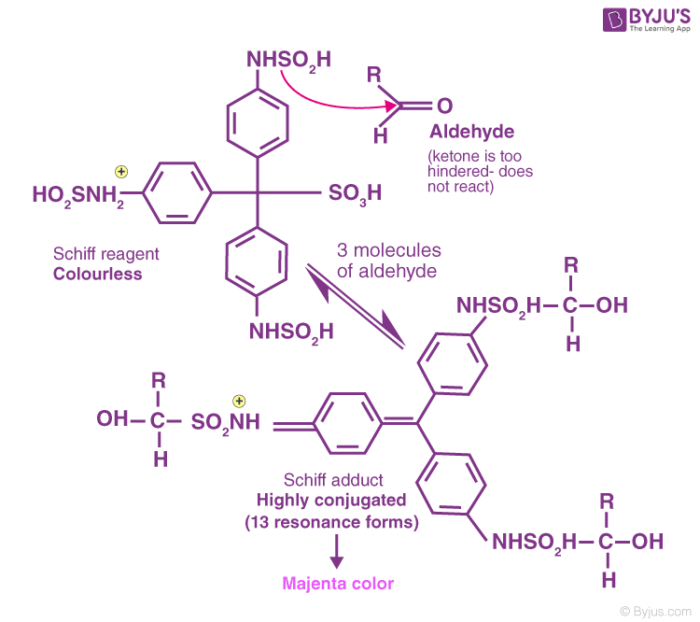 The general mechanism of Schiff’s test is illustrated above.

Do ketones give Schiff’s test?

The colouration is due to the complex compound formation. In general, ketones do not lead to this reaction. The heat should not be exposed to the reaction. With Schiff’s reagent, those ketones give a light pink hue, so light pink colour formation is not a positive test.

Does benzaldehyde give Schiff’s test?

Which test is used to identify ketones?

What are the similarities between aldehyde and ketones?

A carbonyl group is found in both aldehydes and ketones. That means, in this sense, their reactions are quite close. By having a hydrogen atom bound to the carbonyl ring, an aldehyde differs from a ketone. This makes it very simple to oxidise the aldehydes.

Does glucose give Schiff’s test?

In its open configuration, glucose contains an aldehyde group but forms a cyclic acetal structure (also called pyranose). This arrangement is very robust and Schiff’s reagent, which is a fragile foundation, does not break down. Therefore, hydrazone does not shape, giving a negative Schiff’s test.

To learn more about the Schiff’s reagent, the Schiff’s test, and other related concepts (such as Schiff’s bases), register with BYJU’S and download the mobile application on your smartphone.

Test your knowledge on Schiff Reagent And Test
Q5