What is Casimir Effect?

” The attractive force between two surfaces in a vacuum – first predicted by Hendrik Casimir over 50 years ago – could affect everything from micromachines to unified theories of nature.”

Casimir effect is a small attractive force that acts between two close parallel uncharged conducting plates. The force arises due to the quantum fluctuation of the electromagnetic field.

The attractive force between two plates of area A separated by a distance L can be calculated as,
\(F=\frac{\pi hc}{480L^4}A\)

where h is Planck’s constant and c is the speed of light.

Dutch physicists Hendrik Casimir and Dirk Polder proposed the existence of a force between two polarizable atoms and called it the Casimir–Polder force. After a discussion with Niels Bohr who suggested it had something to do with zero-point energy, Casimir alone formulated the theory predicting a force between neutral conducting plates in 1948 which is called the Casimir effect in the narrow sense.

Casimir Effect can be understood with a typical example of a vacuum in space. According to modern physics, the vacuum consists of varying electromagnetic waves and it can never be eliminated. It can be compared to a vast ocean of waves that always shows its existence, and it is unstoppable. These waves always possess a package of viable wavelengths. thus implying that an empty space consists of a minimum amount of energy. The energy that we can never feel, in spite of presence. 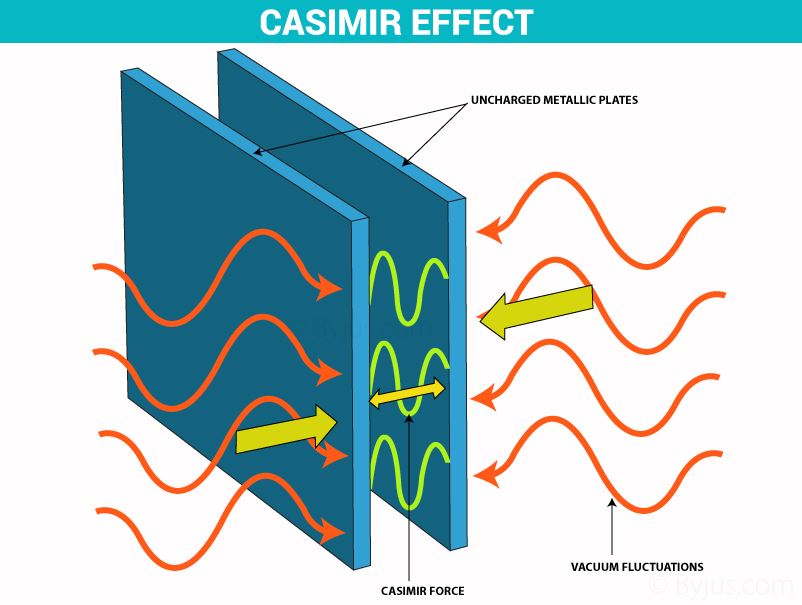 Now consider two mirrors that are placed in a vacuum facing each other. As a result, some waves will occupy the space between the mirrors bouncing backward and forward. Once the mirrors are moved closer to each other the longer waves which are present, due to lack of space they may no longer fit in. This is caused when the total amount of energy that is present between the plates will be a bit less compared to the energy that is present somewhere in the vacuum.

It is one of the suggested possible causes in understanding the Casimir Effect that is based on canonical macroscopic quantum electrodynamics. There may exist a vacuum of a coupled system that detects the properties of an electromagnetic field that will give rise to force. Casimir force is characterized by a property of a coupled system wherein the synergy between the two plates is mediated by the zero-point fields.

Marcus Sparnaay, in 1958, conducted one of the first experimental tests in a delicate and difficult experiment with parallel plates, obtaining results not in contradiction with the Casimir theory, but with large experimental errors.  More accurate measurement of the Casimir effect was conducted by Steve K. Lamoreaux of Los Alamos National Laboratory, and by Umar Mohideen and Anushree Roy of the University of California, Riverside. In practice, we use one plate that is flat and another plate that is a part of a sphere with a large radius to measure the Casimir effect because using two parallel plates would require accurate alignment to ensure they are parallel. Finally, in 2001, using microresonators, a group at the University of Padua finally succeeded in measuring the Casimir force between parallel plates.

Stay tuned with BYJU’S to learn more interesting concepts of physics with the help of interactive video lessons.