Disaccharides are those carbohydrates that on hydrolysis with acids or enzymes give two molecules of monosaccharides which can either be the same or different. 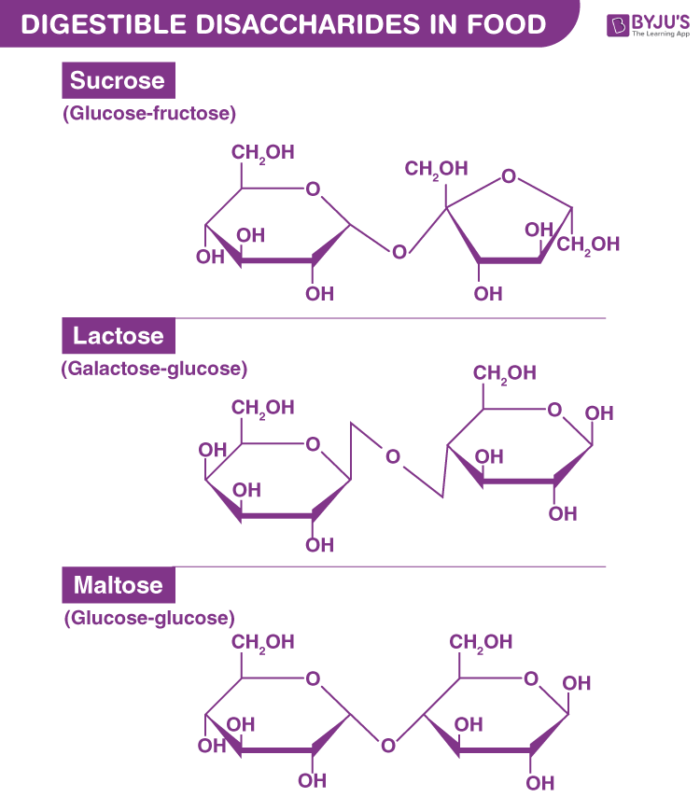 The most common disaccharide is sucrose which gives D -(+)- glucose and D-(-)- fructose on hydrolysis.

Commonly it is called milk sugar as this disaccharide is found in milk. It is made up of Beta-D-galactose and β-D-glucose. The bond is between the first carbon of galactose and the fourth carbon of glucose. This is also a reducing sugar.

Some More Types of Disaccharides

There few more types which are not that popular, such as:

It is made up of 2 molecules of glucose which are linked differently. This can be found in fungi, plants, and insects.

It is formed from galactose and fructose. It is helpful for the treatment of constipation and liver diseases.

It is also made up of two glucose molecules which are also arranged differently. These can be seen bacteriology which is a form of chemical analysis.

It comprises two glucosamine molecules which are linked. It is seen in some bacteria, exoskeletons of insects and is also found in fish, octopus, and squid.

What is the General Formula of Carbohydrates?

What is the molecular formula of the most common disaccharide?

Disaccharides are the carbohydrates that on hydrolysis gives two same or different carbohydrates. Their general formula is C12H22O11.

Maltose which is also known as a disaccharide made up of two alpha D glucose unit. The two-unit of glucose are linked with an alpha 1,4 glycosidic bond.

Is maltose a monosaccharide or disaccharide?

Maltose is a disaccharide.

Does maltose give Fehling’s test?

Test your Knowledge on Disaccharides!
Q5