In figure 1, when the mass comes to rest, the spring gets compressed by a distance ‘x’. The spring then comes to its normal length and mass attains a velocity ‘v’. This compression and elongation continue and each time with a maximum value of ‘x’. So we can infer that the total mechanical energy of the system (Block + Spring) remains constant. While in the second case also there will be compression and elongation but the minimum value will keep on decreasing. So we can say that the total mechanical energy of the system is not conserved in this case.

Now, Conservative force has one more property that works done by it is independent of the path taken.

Work was done by a conservative force 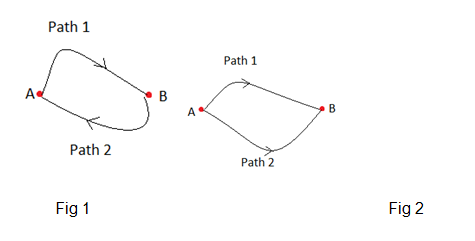 Work done by the conservative force in a closed path is zero.

Using the above two equations we get,

The above equation shows that work done to move a particle from point A to B through path 1 and 2 as shown in figure 2 will take the same amount of work done. But this statement is not valid for non-conservative forces.