What is a Distance-Time Graph?

A distance-time graph shows how far an object has travelled in a given time.  It is a simple line graph that denotes distance versus time findings on the graph.

Note: Curved lines on a distance-time graph indicate that the speed is changing.

For better understanding, let us consider an example of uniform motion. A bus driver drives at a constant speed which is indicated by the speedometer and the driver measures the time taken by the bus for every kilometre. The driver notices that the bus travels 1 kilometre in every 2 minutes.

He prepares the data table after this so that he has a clear understanding of everything and then draws the graph as shown below.

The graph is a straight line and the motion of the bus is also uniform. Also, from the graph, we can find the speed of the bus at any instant of time. The initial and final position of the car can be found as the following:

The slope of the line can be found by drawing a rectangle anywhere near the straight line which determines the speed of the bus. If an object is not moving, the distance-time graph results in a horizontal line which shows that the object is at rest.

The following things can be concluded now:

What is Velocity -Time Graph and Displacement-Time Graph? 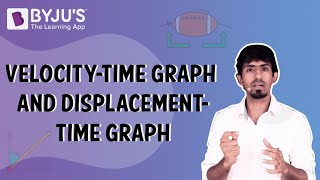