We have learnt what velocity is. Now, we will learn about Velocity Time Graphs .

To draw velocity time graphs, we will use the three equations of motion. Example: If the acceleration of a particle is zero (0), and velocity is constantly say 5 m/s at t =0, then it will remain constant throughout the time. As shown in the figure, the velocity of the particle will increase linearly with respect to time. The slope of the graph will give the magnitude of acceleration. 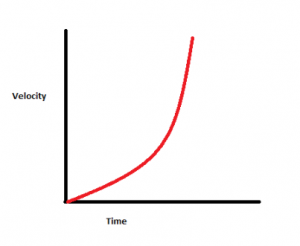 Case 3 was just the case of increasing acceleration. There will be a different graph when the acceleration is decreasing with time. To learn more about velocity time graphs, join BYJU’S.