The earth, along with the other planets, revolves around the sun in its orbit. In turn, the moon revolves around the earth in the moon’s orbit. There comes a time when the three heavenly bodies get aligned in the same straight line. This is when an eclipse occurs. It is defined as an astronomical phenomenon that occurs when one spatial object comes within the shadow of another spatial object. This obstructs the observer from seeing one of them in space. On earth, we witness two types of eclipses: solar and lunar.

Also known as the eclipse of the sun, it occurs when the moon comes in between the sun and the earth. As a result, the moon blocks the light of the sun from reaching the earth’s surface and casts a shadow on it. This occurs on a new moon phase. We can observe up to 5 solar eclipses per year. 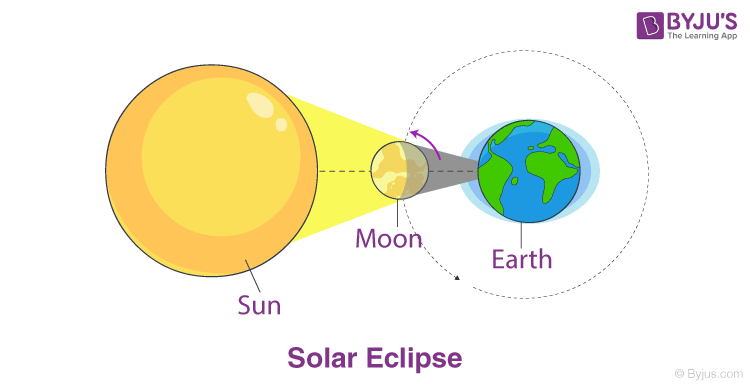 Depending on the distance of the moon from the earth during the event, different types of solar concealment can be observed. They can be categorized as:

On 26th December, an annular solar eclipse occurred when the Sun rose as a “ring of fire.”

Watch this interesting video on Solar eclipse to know more about this amazing phenomenon.

Also known as the eclipse of the moon, it occurs when the earth comes in between the sun and the moon. As a result, the earth blocks the light of the sun from reaching the moon’s surface and casts its shadow on the moon. It occurs on a full moon day. We can observe up to 3 lunar eclipses per year. 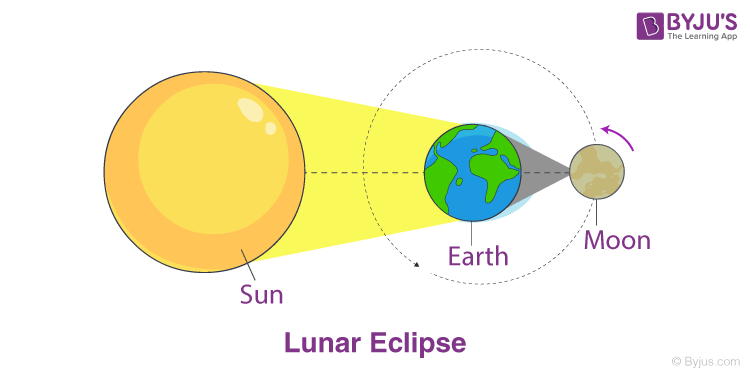 Depending on how the sun, the moon, and the earth line up, lunar eclipse too can be categorized as:

It is advised that one should not look at the sun directly during the solar eclipse as it can permanently damage the eyes. However, it is safe to watch the lunar eclipse with naked eyes.

To learn more about the Eclipses, download the BYJU’S – The Learning App.

Test your knowledge on Eclipse
Q5