Being our closest celestial neighbour appears large compared to the stars. In fact, all the stars and planets are larger than the moon but are so far away that they appear very small in comparison.

The moon’s surface is covered by rocks and loose dirt which we call lunar soil. It is pockmarked with craters of different sizes because of meteorites that hit its surface. On earth, these meteorites burn up in our atmosphere before they reach the ground. But this orb of the night has no atmosphere, so it is covered with large craters. Because there is no air, there is no life on the moon. We all know that Neil Armstrong was the first person to land on this celestial body in 1969.

Phases of the Moon:

If you look up at the moon at night, you would have noticed that it changes its shape every day. This is because the heavenly body has no light of its own; it can only reflect light from the sun. Only the side of the moon which faces the sun can reflect this light and can appear bright; the other side appears dark. As this celestial body revolves around the earth we can see different amounts of the region illuminated by the sun. Thus, it appears to change its shape. 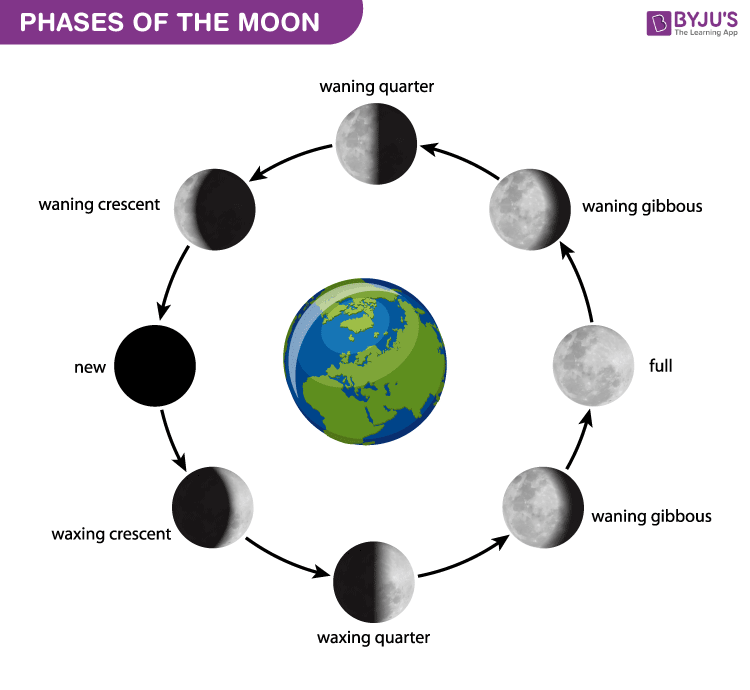 When this heavenly body is behind the earth and sun, we can see the entire illuminated portion – this is a full-moon (Paurnami). When it is between the sun and earth we can only see the dark portion and a new moon (Amavasya) occurs. Between these two extremes, we see intermediate phases such as a half-moon and crescent.

This Planetoid takes almost 27 days to revolve around the earth. But between two full moons, there are 29.5 days. This is because the earth also travels a distance through space during that time around the sun. It has to cover an extra distance (which takes 2 more days) if it has to be exactly behind the earth and sun again.

The celestial body only shows us only one side of itself. One side of it called the dark side or the far side never faces the earth. This is because the moon takes the same amount of time to rotate about its axis as it does to revolve around the earth. This is not a coincidence and occurs due to a phenomenon known as Tidal Locking. In fact, nobody had seen what the dark side looked like until 1959 when the Soviet space probe Luna 3 took a picture of it.

Stay tuned with BYJU’S to learn more about star, earth science and many more.

Test your Knowledge on Moon
Q5