What is Fisheye Lens?

A fisheye lens is an ultra-wide-angle lens that is designed for shooting wide angles generally 180 degrees. These lenses are also known as the ultra-wide or super-wide lens. They are famous for extreme sport, landscape, and artistic photography.

The term fisheye was named in the year 1906 by Robert W.Wood. He was an American physicist and the inventor of this lens. It was first put to use in the year 1920 for studying the formation of clouds. The angle of view of fisheye lenses is generally present between 100 and 180 degrees. The focal lengths depend upon the format they are used for.

There are two main types of fisheye lenses namely full-frame and circular frame. Each type will have a different effect and gives a different type of image. Let’s have a detailed look at them.

The circular fisheye lens is capable of capturing a complete 180-degree view in all directions. So, the image looks like a circular image. But the main drawback of this lens is it forms black edges. These lenses are mostly used in artistic photography and skateboard photography.

Learn more about the concave lens and its uses here. 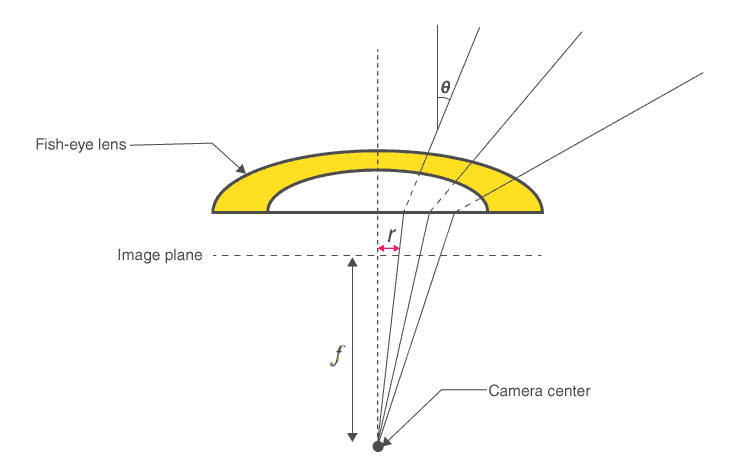 The projection for both the types of fisheye lenses is the same. The only difference is in the field of view. Following is the table with a mathematical formula for different fisheye projection:

Following are the characteristics of a fisheye lens:

Learn more about the convex lens and its uses here.

For more concepts with the help of interactive video lessons, download BYJU’S – The Learning App.