What is Joule-Thomson Effect?

The Joule-Thomson effect also known as Kelvin–Joule effect or Joule-Kelvin effect is the change in fluid’s temperature as it flows from a higher pressure region to lower pressure.

According to the thermodynamic principle, the Joule-kelvin effect can be explained best by considering a separate gas packet placed in the opposite flow of direction for restriction. For the gas packet to pass through, the upstream gas needs to perform some work to push through the packet. The work equals the volume of the packet multiplied by the times of upstream pressure.

As the packet goes through the restriction, it has to make some room by displacing a considerable amount of the downstream gas. It includes performing the work which equals the product of packet volume and downstream pressure.

Due to the different effects of compressibility, the work performed upstream is not equal to the amount of work done downstream for real gases. Since depressuring is viewed as an adiabatic process, it reveals that any gas does not exchange work or heat by its surroundings, any change in internal energy has to follow the first law of thermodynamics.

Gas molecules are subjected to repulsive and attractive forces, (Van der Waals forces) as they are in random motion. When the gas pressure is lowered, i.e, the average distance between the molecules increases, the attractive forces become dominant for many gases at ambient temperature which results in an elevation in potential energy.

Most of the real gases need more work downstream at ambient temperature, due to the effects of compressibility.

This indicates that the internal energy decreases when the gas passes through the restriction.

It can be generalized that for many real gases, the temperature decreases during a reduction in pressure, but not true for every gas and condition. Depressuring is an isenthalpic process which reveals that enthalpy doesn’t change. The temperature can either decrease or increase for any gas based on how the internal energy changes to maintain the enthalpy constant.

The following table explains when the Joule-Thomson effect cools or warms a real gas:

Joule Thomson coefficient can be derived using the thermodynamic relationships and is defined as the isenthalpic change in temperature in the fluid due to pressure drop is given as: 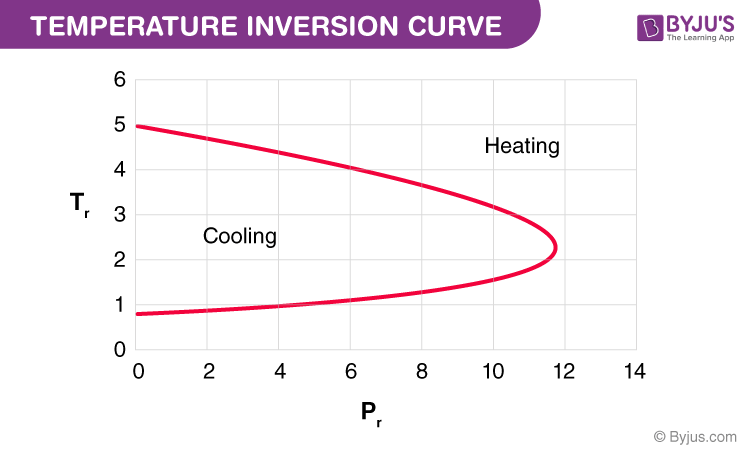 The temperature of a gas at which the reduction in pressure does not lead to any change in temperature is known as inversion temperature.  The gas gets heated up on expansion and cools down below this temperature.

What is the basic principle of Joule Thomson effect?

The basic principle of Joule Thomson effect is based on the transfer of heat. Also, at ordinary temperature and pressure, all real gases undergo expansion and this phenomenon is used in the process of liquefying gases. But this does not hold good for hydrogen and helium.

What is inversion temperature in Joule Thomson effect?

What is the Joule Thomson coefficient for an ideal gas?

The Joule Thomson coefficient for an ideal gas is equal to zero as the enthalpy of the gas is dependent on the temperature.

What is the maximum inversion temperature?

Why is Joule Thomson not applicable to hydrogen gas?

Joule Thomson is applicable to hydrogen gas but at lower temperatures. This is because when they are at higher temperatures, they are close to behaving like an ideal gas.

Stay tuned with BYJU’S to know more about the Joule Thomson Effect along with applications of inverse temperature in real-time.