Have you felt the sudden painful jolt you get when you brush someone’s arm? If you have a woollen blanket then you should definitely do this, switch off the light and brush your clothes with the woollen blanket. The amount of sparks that go off will amaze you. Believe it or not, this very phenomenon is also responsible for all the lightning strikes on our planet. So what is it? It is known as Static Electricity. Static electricity can be a nuisance or even a danger. The energy that makes your hair to stand on end can also damage electronic equipments and cause explosions. To understand static electricity, we need to first understand the basics of atoms and electric charge.

What is an Electric Charge?

Atoms are the building blocks of the universe. Whatever you see around you can be divided into smaller and smaller parts until you finally reach a part you cannot divide further. This building block is what we call an Atom. Inside an atom are protons, electrons and neutrons. Out of the three, electrons and protons fit the definition of an electric charge. The protons are positively charged, the electrons are negatively charged, and the neutrons are neutral. A majority of the mass of the atom is concentrated in a very tiny space in the centre called the nucleus and the electrons revolve around this heavy nucleus.

This means that electrons are held very loosely compared to protons. Therefore, the movement of charges here will be restricted to the movement of electrons. Since the atoms are made up of protons and electrons, we can safely conclude that all things are made up of electric charges. The charge of one proton is equal in strength to the charge of one electron. When the number of protons in an atom equals the number of electrons, the atom itself has no overall charge, it is neutral.

Electrons in materials are held extremely loosely meaning that they can be exchanged through simple contact like rubbing. The image below is an example of rubbing a glass rod with silk which causes static electricity. When two objects are rubbed together to create static electricity, one object gives up electrons and becomes more positively charged while the other material collects electrons and becomes more negatively charged. We should keep in mind that the rules such as like charges repel and unlike charges attract is applicable here. 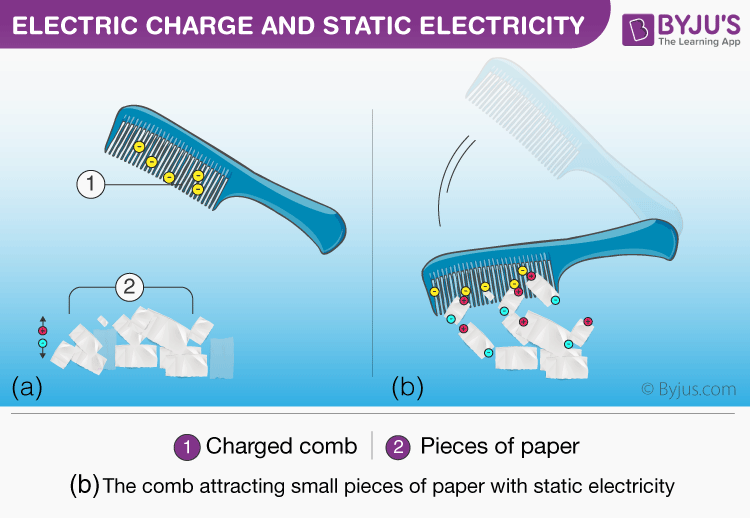 Speaking of times when your hair seems to stand on its ends when you remove your cap. Static electricity is the culprit here as well. As you remove your hat, electrons are transferred from hat to hair, creating that interesting hairdo! Remember, objects with the same charge repel each other. Because they have the same charge, your hair will stand on end. Your hairs are simply trying to get as far away from each other as possible! The same is true for when you comb your hair repeatedly with a comb. If you bring a comb you have used close to small bits of paper you will see that the comb attracts the pieces of paper. The comb loses electrons while rubbing your hair and this charge imbalance creates static electricity which then attracts the small bits of paper.

The electric charge is defined as the basic physical property of matter that causes it to experience a force when kept in an electric or magnetic field.

How is the electric charge classified?

What are positive electric charges are called?

What is an electron?

The electric charge which is negetively charged is known as an electron.